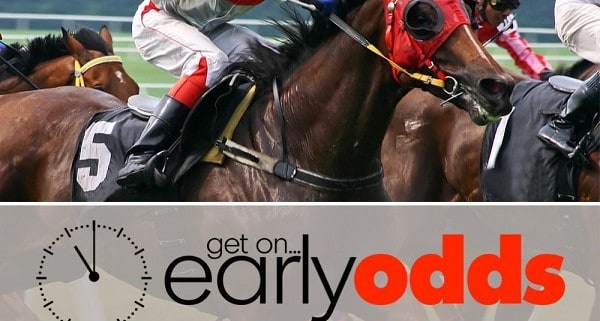 We have reached the end of our three month trial of Early Odds and here are the final results:-

Early Odds is a horse racing selection service from the Winning Information Network tipster stable. It has been going for just over a year now and in that time has produced some very impressive results.

It is run by a guy called Max who apparently built a database of horse racing statistics and information and then developed software to analyse all that data and come up with winning selections.

We ran a three month trial of Early Odds, so how did it perform under the spotlight of a live trial?

Well we are pleased to report that it has produced very good results and continued the excellent form shown prior to our trial.

We have finished the trial 112 points up at advised prices, which constituted 112% growth of the bank. 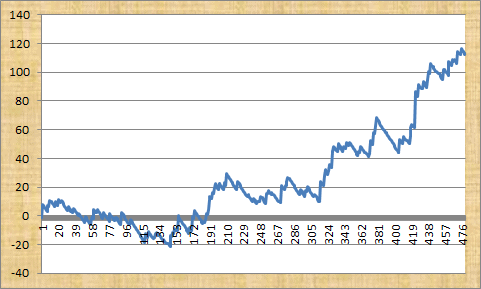 As you can see, things got off to a slow start but then really took off over the second half of the trial.

Those results were achieved with a return on investment of 25%, which is excellent going and is one of the best returns from a trial we have seen in a while.

However, at Betfair SP the results were considerably lower with 21 points profit made.

So following the selections at Betfair SP will produce at loss less profit over the long-term.

As the same of the service suggests, this is about taking early prices the evening before racing, so it is vital to get the bets on as soon as you can.

Ease of use: Tips are sent out in the evening before racing and there are an average of five bets per day, so some time commitment is needed to follow the service.

Availability of prices: Prices get pushed in fairly significantly between being sent out and the race time, so it is crucial to get the bets on as soon as you can and certainly in the evening. As we say above, Betfair SP results were markedly lower, so you may struggle to make a profit at BSP.

Strike rate: The strike rate for the trial was 21%, which is on the lower side so some patience and a good-sized bank will be needed.

Advised Betting Bank: No betting bank was advised, but we used a 100 point bank for the trial and it was never in jeopardy during the trial.

Early Odds has produced some excellent results during our trial, making over 100 points profit in 3 months.

That more than doubled our starting bank, which is a fantastic effort and definitely merits a recommended rating from us.

It is worth bearing in mind that there’s a little bit of work involved in following the service, with an average of five bets per day.

And the results at Betfair SP were considerably lower with 21 points profit made, so to get the most out of this service you will need access to some bookie accounts.

As long as you have that though, this service is well worth joining and comes highly recommended.

It’s been a great month for Early Odds, who have made 82 points profit at advised prices since our last update, putting them 101 points up for the trial overall.

At Betfair SP, there is quite a significant difference however. They have made 45 points profit since our last update, meaning they are 19 points up for the trial overall at Betfair SP.

So as we have said before, this is probably a service that requires you have to bookie accounts as it looks like it will struggle at Betfair SP.

We are nearly at the end of the trial so will wrap things up shortly.

There has been an improvement for Early Odds since our last update, with 19 points profit made at advised prices.

That also brings them to 19 points up overall for the trial.

However, this service does not appear to be practical to follow at Betfair SP, as they are 26 points down at BSP for the trial.

That is not surprising really, given that the service focuses on finding value in early prices.

So this looks like only being worth following if you have a good number of bookie accounts still open.

After a month of following the tips of Early Odds – a horse racing specialist – we are back where we started at level for the trial.

At Betfair SP things have been a bit more of a struggle, with 23 points lost so far.

Given that the service focuses on finding early value in the prices, you would expect it would suffer somewhat at Betfair SP though.

Let’s hope things have moved into the black by the time of our next update.

When you think of approaches to winning at horse racing betting, there are a few key things to have.

An ability to study the form, crunch through numbers and see things from angles most punters don’t take into account.

Another factor we have seen more and more lately is the ability to take advantage of the early prices posted by the bookmakers.

We have just come across a service that combines all these things and has achieved very impressive results to date.

The service in question is called Early Odds.

It is run by a guy called Max who is a professional horse racing bettor and computer programmer.

Apparently Max built a database of horse racing statistics and information and then developed software to analyse all that data and come up with winning selections.

So far it has worked splendidly for him, amassing over 500 points profit since starting providing his selections in November 2015.

Amazingly, all that has been achieved using just 1 point level stakes, quite an extraordinary feat.

The return on investment so far is 32%, which is amongst the highest we have seen over an extended period.

Now before those of you who have lost your bookie accounts turn away, there is more good news.

Even using Betfair SP, Early Odds has managed over 275 points profit at a return on investment of 22%.

Now how many services do you know that can say that!

And each month so far has been profitable, showing a high level of consistency to date.

Needless to say, we are quite excited about this service and can’t wait to get the trial underway.

So without further ado, we will commence a three month trial today and will be back soon with our first update on how things are going.

In the meantime you can check out Early Odds here.