Please note this service has been discontinued. We will update this page if the system is re-released in future.

As an alternative, the scanner which the alerts were generated from is still available and is called In-Play Trading, so if you are able to trade matches in-running you should be able to achieve similar results to those achieved below with Football Trading Alerts by using the scanner.

We have reached the end of our three month trial of Football Trading Alerts and here are the final results:

Football Trading Alerts is a trading system for Betfair from the same team behind Pre-Match Trading and Trade the Horses, among other products.

It is in many ways in a spin-off of their In Play Trading tool, which uses in-play statistics to identify where there is value in trading a particular market.

For example, in-play statistics may indicate that one team is dominating a match, creating lots of chances, having lots of possession and corners and looking very much like they may score soon. So the tool would give a rating suggesting to back that team (or lay the draw if the game was drawing).

Or it may that the stats indicate that both sides are creating lots of chances and the game is very open, so backing overs in the over/under market may be the thing to do.

Anyway, what Football Trading Alerts does is rather than you having to monitor lots of markets manually, it does the hard work for you and tells you when to trade a particular match.

So for instance you receive an e-mail like this:

You then just follow the instructions and execute the bets they suggest and that’s it, you are done!

Despite the name, you don’t actually need to trade these selections, you can just leave them to run. So it really is very simple to follow.

But how did it get on under a live three month trial?

Well we are pleased to say it performed excellently, producing £629 profit. The very most you could lose on the majority of bets was £35, with a few at £39.

The alerts had a good strike rate of 60%, meaning more than of the bets were winners.

Here is a look at the profit graph for the trial: 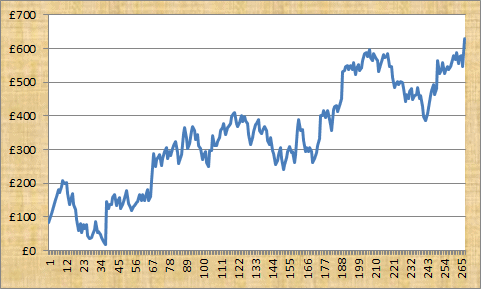 A pretty steady growth path over the trial – good stuff.

Making a profit from football is notoriously hard so we are delighted to have come across a system that has a clear, logical approach that you can understand as to why it works.

The power of their approach is demonstrated by their long-term results, which show profits of well over £4,000 since starting up in January 2015.

Now we can’t verify the results from before our trial started, but we have no reason whatsoever to doubt them as the results given on their website for the period of our trial matched exactly the selections that were given out.

Ease of use:  The only thing to be aware of – and we did mention this a few times during our trial – is that you may not be able to follow all of the alerts that are given out.

That is because the selections are sent out for live matches and you need to be able to access Betfair when the alerts are sent out. You might be out, at work, or otherwise engaged. It is not like tipping services, that for example give tips out in the morning and then you have a few hours to get the bets on before the matches or races start.

However, at the same time you have a good idea of when trades will be sent out – busy footballing weekday evenings or weekends from 3pm, so it is not like you need to be on 24 hour call or anything.

And of course even if you miss a few trades it is not the end of the world. They clearly have an edge over the market, so over the course of time you should still do very well if you are trading the majority of the alerts.

Availability of prices: This is all about trading quickly, so occasionally by the time you receive the alert and log in, a goal will already have been scored. But then on other occasions, the odds will have improved without a goal being scored, so you will do better than their advised prices. Swings and roundabouts is probably what a football manager would call it.

Strike rate: The strike rate for the trial was 60%, which was a good level and meant minimal losing streaks and a strong proportion of winners.

Advised Betting Bank: No betting bank was advised, but we used a £1,000 bank which should be more than enough given the £35 stakes and 60% strike rate.

We have written many times here at Honest Betting Reviews about how hard it is to make money betting on football and how few successful football tipsters and betting systems there are.

So it is great to see a product like Football Trading Alerts come along and produce excellent profits over the course of a three month trial.

With £629 profit made to just £35 stakes, the alerts have demonstrated a clear edge over the market and grown our bank by a very nice 63% over the trial.

It is a strategy that clearly makes sense to use in-play data on how a match is going to place bets. We have all seen games when one side is dominating and constantly knocking on the door. Man Utd under Alex Ferguson used to masters at it – producing wave after wave of attack.

So it is a definite recommended rating from us. The only thing to be aware of us is that you may miss a few trades, but this shouldn’t stop you from a really good long term profit from the trades.

Football Trading Alerts continues to do well, adding another £127 profit since our last update three weeks ago.

That means they are now £483 up for the trial overall.

We have been impressed with the consistency of the service and looking back at their results over the last few years, it does appear they have a solid edge over the market.

So with just a couple of weeks left in our trial, this one is looking like  winner.

We will return soon with our final verdict on Football Trading Alerts.

More profit has been added by Football Trading Alerts since our last update a month ago, with another £54 profit made over the month.

That means we are now £356 up for the trial overall after two months.

As we said last time, you do need to be able to access Betfair when the trades are sent out, so it is possible you will not be able to make all the trades.

But it does appear from what we have seen so far that there is value in the trading alerts, so overall you should do well with this.

It’s been a very good start to our trial of Football Trading Alerts, with £302 profit made so far after one month of following the alerts.

That profit is following their advised staking, where the maximum you can lose on any one game is £32.

So you could say we are just under 10 points up so far.

The only thing to note about this service is that unless you are constantly monitoring your e-mails and have access to Betfair all the time, you will probably miss some of the selections.

It might be you are out for dinner, at the pub or something and not able to check your e-mails to see if there are any selections.

But at the same time, it seems these selections do offer “value” so even if you miss a few, over the course of time you should still make a good profit as each pick is based on the current state of play in a game as indicated by the in-play stats.

There will also be times when there will have been a goal before you can get your bet on, but this will be counteracted to a certain extent by the instances when the odds have drifted out from those advised in the e-mail so you are getting better value.

Overall we are impressed with this service, which seems to be a very good way of finding value in-play bets on football.

With the new football season just underway we thought it would be a perfect time to check out a new football trading product.

This one is called Football Trading Alerts and comes from the same team behind In Play Trading and Pre Match Trading.

It comes very much from the In Play Trading system, in that subscribers to that get access to a chat room where trades are suggested by the administrator based on certain indicators.

However, not everyone has the time and inclination to sit in a chat room all evening waiting for trades to appear, so they have developed these alerts as a neat solution.

What happens is you get an alert to trade a match on Betfair (or your exchange of choice) when their relevant indicators are hit.

Then you simply follow the instructions and execute the trades. You don’t need to monitor after that, just let them run until the end of the game – or hopefully until they are successful.

The trades are based primarily on their “pressure index” which combines a variety of statistics showing when a team is dominating a game and creating lots of chances.

In such instances, more often than not they will go on to score a goal. That is the theory on which the alerts are based.

The results published on the website look very impressive, with over £4,000 profit made since March 2015, with up to £48 generally risked per trade (but often less than that).

We like the simplicity of this approach and are quite hopeful the trial will turn out positively.

So without further ado, we will kick-off our trial and report back soon on how things are going.

In the meantime, you can check out Football Trading Alerts here.