We have reached the end of our three month trial of Sports Predictor Football and here are the final results:-

After having recently finished our review of Sports Predictor Horse Racing, which passed with flying colours, it is the turn of their football service to come under the spotlight.

Sports Predictor Football is run by a guy called Josh, who is apparently a professional football gambler with over 10 years’ experience betting for a living on the European game.

There are around 80 bets per month, spread across the European leagues

The results published on the Sports Predictor website showed the tips having made a profit of over 100 points during the 2016-17 season, so we were quite hopeful coming into the trial.

However, as is often the case, the results during our review haven’t lived up to the pre-trial billing and we have ended up 17 points down.

As you can see from the graph below, things were actually a good deal worse earlier on in the trial but picked up considerably in the latter half. 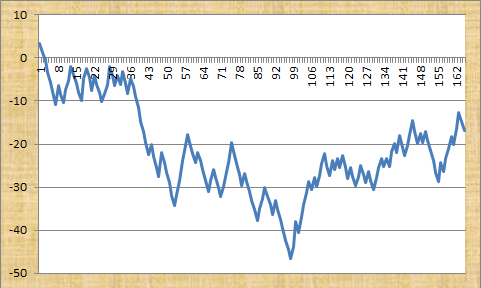 Using a 100 point bank that would equate to a 17% loss of the bank, which is a little disappointing.

Whilst the trial hasn’t been a disaster by any means, we feel a negative ROI of 5% is worthy of a narrow FAILED rating here.

It is one we will keep an eye on though and if results can pick up to the levels seen during the previous season then an upgrade could be on the cards.

Ease of use: A pretty easy service to follow, with an average of two bets per day, normally sent out early in the morning.

Availability of prices: We didn’t have any trouble getting the advised prices and by using the exchanges there is plenty of scope for matching the published results.

Advised Betting Bank: We used a 100 point bank for the trial which looked like it might be a little thin when we were 46 points down at one stage. A 150 point bank might be more advisable here.

Subscription costs: The costs to sign up £17 per month or £167 per year. The service comes with a profit guarantee, so if they don’t make a profit during your subscription period, you will get the same period again for free.

Sports Predictor Football has completed a three month trial and finished with a loss of 17 points.

Although that was no disaster, it was a little disappointing to have had a negative return on investment of 5%, so it’s a narrow FAILED rating for this one unfortunately.

We will keep an eye on things though and if results pick up in future then an upgrade could be warranted.

Not much change for Sports Predictor Football since our last update, with just one point of profit gained in that time.

That means we are now 27 points down for the trial overall.

Unfortunately this isn’t doing as well as their horse racing service which has been flying along, but then football does tend to be harder to make money in than the geegeez.

Anyway, let’s hope for some improvement from the football service by the time of our next update.

It’s been a tough run lately for football tipping service Sports Predictor Football, with 22 points lost since our last update.

That means they are now 28 points down for the trial overall.

There have been a lot more bets since our last update, with sometimes 9 or 10 in one day after the quiet start to the season.

Hopefully the recent form is just a blip and we will see things pick up soon.

It almost feels too early for an update on Sports Predictor Football. Not in terms of time, because we are three weeks into the trial, but more because of the low quantity of bets.

With the international break having just been and gone and with them not tipping in those international fixtures, there have only been 8 bets so far since we started proofing the tips.

So it is a little early to really be saying much about the results.

However, for the record they are 6 points down to date at advised prices.

Now that the international break is out of the way, hopefully we can settle down to see a higher bet volume and plenty of winners.

After recently commencing a trial of Sports Predictor’s Horse Racing service, we thought it would be a good time to launch a trial of their football service given that the footy season has just kicked off.

Their football tipping service is run by a guy called Josh, who is apparently a professional football gambler with over 10 years’ experience betting for a living on the European game.

There are around 80 bets per month, spread across the European leagues. Bets are sent by e-mail early in the morning and typically take a format like this:

Since starting in October 2016, the bets have apparently made a very respectable 98 points profit at a return on investment of 8% and at a healthy strike rate of 49%.

The service comes with the same profit guarantee as the horse racing service, so that if they don’t make a profit during your subscription period, they will double your membership period for free. You can’t say fairer than that really!

The tips are priced at a very reasonable £17 per month, so it won’t break the bank to join up either.

We will run our standard three month trial and will report here on how things are going regularly during the trial.

In the meantime you can check out Sports Predictor Football here.

Platinum Winners – Final Review
Scroll to top
We use cookies to ensure that we give you the best experience on our website. By continuing we assume you accept the use of cookies. AcceptPrivacy Policy