We have come to the end our trial of The Golf Profiteer and here are the final results:

We are pleased to say that the Golf Profiteer has added 5 points of profit since our last update to finish the trial at 58 points in profit.

Things really turned around for the Profiteer in the latter part of the trial with Emilliano Grillo winning at 60/1, Victor Dubuisson winning the Turkish Airlines Open at 43/1 and Charl Schwartzel winning the Alfred Dunhill Championship at 6/1.

There was also a near miss with veteran David Toms finishing 2nd at 80/1 at the Sanderson’s Farms Championship.

You can see this dramatic turnaround in the graph of the results for the trial: 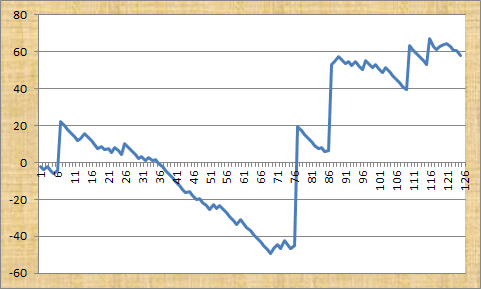 We have said before with golf tipsters that it is (literally) a different ball game to other tipsters. As you are betting at much higher odds, you therefore need a much bigger bank and there will be longer losing streaks.

So graphs like this will not be unusual where there is a run of perhaps -50 points or so before a big bounce upwards with a winner at large odds. It is not something to be alarmed about and is just something you have to get used to if you are following a golf tipster.

Overall we are impressed with the Golf Profiteer and with his recent run of form his full results for three years of tipping are:

So three years of solid profit, which is very commendable for a golf tipster and this has been achieved at a return on investment of over 26%, also impressive.

It’s a thumbs up then for the Golf Profiteer and one we are happy to add to the approved pile.

Ease of use: With just 6 bets per week it is a simple service to follow and very little time commitment from the punter.

Availability of prices: The prices were generally available and you can match the prices on Betfair. Unusually they tip win and top ten rather than each-way, so using Betfair for Top Ten markets can be advantageous.

Strike rate: The strike rate for the trial was 30%, which is higher than with most golf tipsters and is probably down in part to the aforementioned use of the top 10 finish rather than standard use of each-way terms.

Advised Betting Bank: A Bank wasn’t advised but we used a 150 point bank for the trial, which was pretty comfortable and should be with a long-term strike rate of 32%. There could be an argument for using a lower bank but we like to be on the safe side on these things.

We are delighted to make The Golf Profiteer the first golf tipster we have given an approved rating to here at Honest Betting Reviews. A nice 58 points of profit during the trial was a very healthy return.

This is a tipster that clearly knows their stuff and has now established three solid years of profit, which is exactly what we are looking for.

We hit a couple of nice winners during the trial, particularly Emilliano Grillo at 60/1, which was a good find because he is a talented young player that came in under the radar at a tasty price.

The low subscription costs are a plus and with very little work on your part, this one comes with a firm recommendation if you are looking for a top golf tipster.

You can check out the Golf Profiteer here.

It has been a superb turnaround for the Golf Profiteer, who has amassed over 85 points profit since our last update about six weeks ago.

That takes him to +53 points for the trial overall, which is very good stuff.

The turnaround in fortunes has been down to two winners – firstly young Argentine Emilliano Grillo at 60/1, who won in a thrilling finish at the Frys.com Open, overcoming Kevin Na in a playoff and then Frenchman Victor Dubuisson who won the Turkish Airlines Open at 43/1.

That was followed up by a 2nd place finish for David Toms at the Sanderson Farms Championship at 80/1 (also advised at 6.8 for the top ten finish) so it could have been even better.

We now have over 100 bets for the service, which takes us to the minimum we normally need to judge a service, but we will run the trial to the end of the golf season in about a month or so, just to round things off neatly.

In the meantime you can check out the Golf Profiteer here.

Unfortunately the Golf Profiteer has continued the downward trend since our last update just over a month ago and is now 33 points down for the trial.

However, they were unlucky with Henrik Stenson at the Deutsche Bank Championship, with the Swede managing to throw away a big lead (think it was about 4 shots at one stage during the final round) culminating with him hitting it in the water at the 16th and handing the title to young gun Rickie Fowler.

It is also worth pointing out that in golf you are generally betting at much higher odds than in other sports, so losing runs will inevitably be longer. But it just takes one winner to radically turn things around.

The bet volume is very low with this service so we are probably looking at a 6 month trial to hit the minimum 100 bet target.

We will be back next month with further updates on the Golf Profiteer.

We are a month into our review of The Golf Profiteer and thought it would be a good time for an update.

It is a busy time of year for golf with the Open Championship, PGA, WGC Bridgestone Invitational and the Fedex Cup Playoffs to come.

So how has this one been doing so far?

Well, it has made a solid start and is currently 6 points in profit.

That is largely due to a nice 25/1 win on Scott Piercy at the Barbasol Championship, which has boosted the results.

Interestingly, rather than taking the conventional approach of tipping each-way, they tip win and top-10. Perhaps that provides a bit more leeway if the player does well but doesn’t quite make the places.

I know I have had plenty of those agonising 6th place finishes over the years, so top 10 is a safer option I suppose.

Anyway, let’s hope they continue to find the profits and we will back again soon for another update.

In the meantime you can check out The Golf Profiteer here.

With the Open Championship being played this week we thought it would be a good time to start a new review of a golf tipster.

So we have found a promising one in the shape of The Golf Profiteer from the Tipster Street stables.

Their stated profits are an impressive 311 points to the good since they started in January 2013.

Some of their past winners include:

Their profit graph shows pretty steady progress over the last year, so let’s hope they can keep that up during our trial.

They concentrate mainly on the PGA and European Tours, with the occasional bet from the Asian Tour.

It will be interesting to see who they tip for the Open this week – all eyes seem to be on Spieth as he attempts to complete the third leg of the grand slam and Rickie Fowler after his win at the Scottish Open. But perhaps they will go for some longer odds picks.

Anyway, we will conduct our normal three month trial which will take us nicely through the last two majors of the season, as well a WGC event and the Fedex Playoffs, so plenty of juicy tournaments to get their teeth into.

Let’s hope we this one turns out to truly be a profiteer!

You can check out The Golf Profiteer here.