We have reached the end of our three month trial of AH Horse Racing and here are the final results:-

AH Horse Racing is a tipping service from the respected tipster platform Punt Hub and has been around since August 2017.

It’s a very straightforward service to follow, with just a couple of bets per day on average, normally sent out in the evening with the occasional morning message. The tips tend to come with full write-ups and you can tell they really know their apples when it comes to horse racing.

We had high hopes going into the trial based on the previous results and for once we can say that we weren’t disappointed!

After a three month trial they managed to rack up an impressive 52 points of profit at advised prices, with an average of just 1 point per bet.

That was achieved with a superb return on investment of 36%, one of the highest we have seen for a while. Anything in the 20s is considered very good in ROI terms so to get above 30% is exceptional.

All three months we were following the service were profitable and going back further, the six months prior to that were also profitable according to Punt Hub (and whilst we did not proof those results we have no reason to doubt them based on all the proofing we have done of Punt Hub services), so that makes nine profitable months in a row.

The strike rate was also very good at 32%, so a good proportion of winners.

The profit was fairly consistent throughout the trial, with a particularly strong burst in the middle, as you can see below: 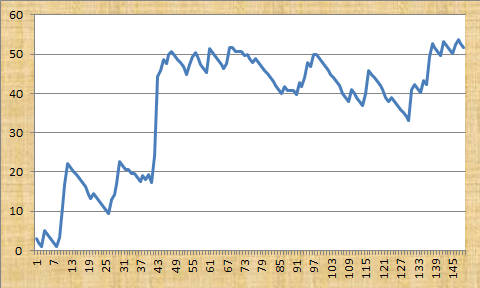 At Betfair SP they made 27 points profit, so about half the profit of the advised prices and pretty respectable.

So all in all there is a lot to like about AH Racing and this is one that definitely goes on the PASSED list. It was a very impressive trial and this looks like a top quality service to us.

Ease of use:  As we say, the workload is very low here with just two bets per day on average, with tips normally sent out in the evening but some in the morning too.

Availability of prices: When tips are sent out in the evening you want to get your bets on quickly and certainly that same evening as they can get pushed in by the next day. The Betfair SP profits were about half of the advised profits, so it looks like the service is still viable to follow at BSP but you will be giving up some of the profits.

Strike rate: The strike rate for the trial was 32% which is solid, particularly in context of the return on investment of 36%.

Advised Betting Bank: There didn’t seem to be a recommended betting bank for following the service, but we used a 100 point bank which seemed sufficient with a decent strike rate and 1 point staking.

It’s been an excellent trial by AH Horse Racing, with 52 points profit made at advised prices. That was achieved with a return on investment of 36%, which is highly impressive.

With very reasonable subscription costs and being simple to follow, it receives a definite PASSED rating from us.

There has been a small retrace for AH Horse Racing since our last update, with 4 points lost at advised prices.

That means they are now 36 points up at advised prices for the trial overall.

At Betfair SP the dip has been a little steeper, with 9 points lost since our last update, putting them 15 points up for the trial overall at BSP.

Still, looking at the trial as a whole this has done well and is looking very promising.

There has been a small step backwards for AH Horse Racing since our last update, with 8 points lost at advised prices over the last couple of weeks.

However, they are still doing very well for the trial overall, with 40 points profit made at advised prices so far.

At Betfair there has been a 9 point loss since our last update, but they are still 24 points up for the trial overall.

Hopefully this is just a small blip and we will be back to winning ways again shortly.

It’s been a fantastic start to our trial of horse racing tipster AH Horse Racing. After a month of the trial, they are 48 points up to advised prices.

At Betfair SP things have also been going well, with 33 points profit made so far.

These results are particularly impressive when you consider average stakes are around 1 point per bet.

They had a cracking run at Cheltenham, racking up close to 30 points profit and landing a number of winners, the highlight being Mister Whitaker at 20/1.

Anyway, a great first month and more of the same would be much appreciated.

We recently started a new trial of a Punt Hub service having not done one for a while, so much like buses, it is time for another one to come along straight after.

The Punt Hub service we are looking at today is AH Horse Racing.

There isn’t much info about AH Horse Racing, but we are told that they have “Determination – Ability – Consistency,” which sound like the kind of qualities we would like to see in a tipster.

Looking at the results, after a tough first month they have done well, with the following five months producing a profit and currently February is in profit too.

The overall profit stands at 32 points so far, which has been made with a 6% return on investment.

Hopefully they will continue to produce regular profit during our three month trial and continue the last five months consistent form.

As ever, only time will tell but the signs are encouraging anyway.

Results will be updated here on a regular basis. We started receiving tips on 15th February, so we will record results from then onwards.

In the meantime you can check out AH Horse Racing here.