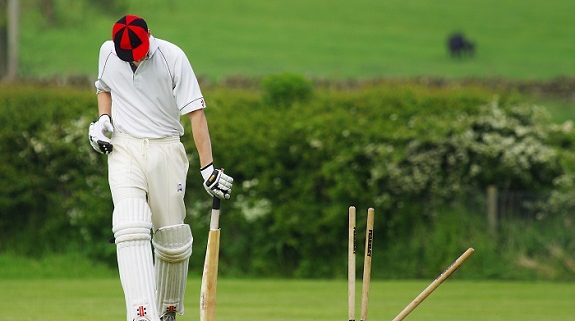 We have reached the end of our six month trial of the Cricket Betting Tipster and here are the final results:-

One of the strange things about cricket betting is that even though there is a massive amount of money wagered on the game, there are very few cricket tipsters around.

In fact this is only the second cricket tipster we have ever reviewed here at Honest Betting Reviews, with other service having been discontinued.

So if this trial had gone well, then the Cricket Betting Tipster could have rather cornered the market – in being pretty much the only successful cricket tipster out there (that we know of at least)!

Unfortunately however things never really got going for them during our trial, with a loss of 23 points made in the end.

Here are the results for the trial in graph format:- 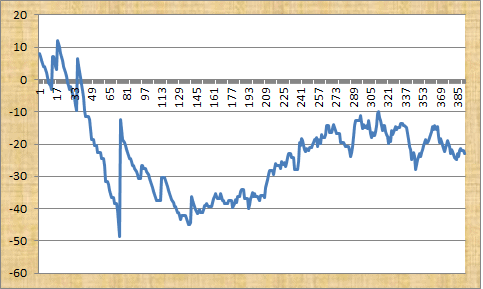 As you can see they went down quite badly early on but then fought back well in the second half of the trial.

We followed the tips over the course of six months so gave them a reasonable amount of time to prove themselves, but as we say they couldn’t quite manage to get into the red.

The trial was no disaster either though and with less than a quarter of the bank lost, we think a NEUTRAL rating is fair in this instance.

Perhaps a service to keep an eye on if you are a fan of the leather and willow to see if their form improves over the coming months.

Ease of use: Good – tips are sent out well in advance of matches and with an average of 2 bets per day there isn’t too much work involved in following the service.  Tips come in games from all around the world and all forms of cricket including both men’s and women’s.

Availability of prices: Good – we found the prices were generally available and there was no real downward pressure on prices after the tips were released.

Strike rate: The strike rate for the trial was 36%, which in itself sounds good but in reality needs to be a little higher to make a profit at the odds they are tipping at.

Advised Betting Bank: The bank advised for the trial was 100 points, which seems more than adequate and was never in danger of being lost during the trial.

After a six month trial the Cricket Betting Tipster finished with a loss of 23 points, which whilst it was disappointing wasn’t a disaster either.

With under a quarter of the advised bank lost, we consider that a NEUTRAL rating is fair in this instance as no great damage was done. This is a service to keep an eye to see if they can turn their form around and establish themselves as one of the only successful cricket tipsters out there.

Not much change for the Cricket Betting Tipster since our last update a month ago, with a loss of 3 points in that time.

That means they are now 20 points down for our trial overall.

This one is struggling to get its head above water, just needs a push to get into profit for our trial. Would be nice to have a profitable cricket tipster as we have yet to find one yet, but there is still hope with this one.

A small improvement for the Cricket Betting Tipster, with a profit of 5 points made since our last update a month ago.

That means they are now 17 points down for our trial overall.

They have slowly been inching towards getting back to even after going quite a way down early in our trial, so hopefully by the time of our next update they will have managed it.

It’s been a good run for the Cricket Betting Tipster since our last update, with a profit of 19 points made over the last month.

They are still down for our trial overall though, with 22 points lost in total.

At the start the service focused mainly on the man of the match bets but has recently concentrated more on the match odds market, which appears to be paying dividends.

Let’s hope the recent turnaround in form continues and by the time of our next update they have made it into the black.

The tough run continues for the Cricket Betting Tipster, with another 10 points lost since our last update a month ago.

That means they are now 41 points down for the trial overall.

The main cricket season may have come to an end here in the UK but there is still plenty of cricket going on around the world so there is plenty of action to still get involved in.

This does need a turnaround in form soon so let’s hope we have better news to report by the time of our next update.

It’s been a tough start to our trial of the Cricket Betting Tipster, the first cricket specialist we have reviewed in quite some time here at Honest Betting Reviews.

So far after a month they are 31 points down.

Most of the bets are in the man of the match market and tend to be sent out the morning of the match, so you have to be fairly quick to get the bets placed on some occasions.

A shame to see the slow start here as we had quite high hopes starting off the trial and results looked very good, but still early days so plenty of time to turn things around.

In over three years of running Honest Betting Reviews we have only reviewed one cricket tipster so far.

And that tipster no longer exists, which gives you a sense of how few options there are in terms of decent cricket tipsters out there on the ol’ internet. We had been remarking recently on how few boxing tipsters are available to follow but there may be even fewer cricket tipsters.

So we were pleased when we saw the reputable Betting Gods tipster platform had uncovered a promising cricket tipster and had been following their tips for six months before opening up the service to the public.

Their tipster – quite simply named the “Cricket Betting Tipster” – has amassed some impressive-looking results in those six months. His name is Pankaj and he has a wealth of expertise in cricket betting over a number of years.

A profit of over 200 points to an average of one point stakes is formidable enough by itself, but throw in a return on investment of well over 50% and six profitable months out of six so far and you are talking about some damn nifty stats.

All that adds up to an average monthly profit of over £400 to date to just £10 stakes, which needless to say is pretty awesome.

The strike rate is a little on the lower side at just under 12%, so this is going to be one for the patient investor who can withstand the odd losing run or two along the way.

But from what we have seen so far, if you can see those through then there could well be some very nice profits on the other side.

To be honest so far there haven’t really been any losing streaks or drawdowns to speak of, it’s just been pretty much plain sailing. But it’s worth bearing in mind with a 12% strike rate that there could be some over the long term.

Anyway, looking at the selections it seems the vast majority are in the man of the match market, so Pankaj obviously specialises in that market. It’s often a good sign when a tipster focuses on just one or two markets as it allows them to build up a real level of expertise to be able to beat the bookies over the long run.

It seems to have worked very well so far for Pankaj in any event, so let’s hope he can carry that on during our live trial.

Only time will tell of course but we are liking the look of this one and let’s hope only our second-ever review of a cricket tipster will prove to be a profitable one. As usual we will post results and updates here.

But in the meantime if you want to check out the Cricket Betting Tipster you can do so here.