We have come to the end of our three month trial of The Racing Tipster and here are the final results:-

What name could be more appropriate for the provider of tips on the gee-gees than The Racing Tipster?

That is the title of the latest service we have just finished trialling here at Honest Betting Reviews, having proofed their tips for the last three months.

It is run by a chap called Joel Ellis who has many years of knowledge and also form studying that has enabled him to devise this horse racing system. Coming into our trial, the results looked very impressive with over 300 points profit made to 1-point level stakes in just over a year of tipping.

The service is very straightforward to follow, with an average of just one bet per day, normally provided in the morning. Unusually, prices are given based on the current price at Betfair rather than the bookies’ best price.

So on to the important bit – what were the results like during our trial? Well, they ended up 8 points up at advised prices. That equated to a return on investment of 7% and was achieved with a strike rate of 26%.

As you can see from the graph below, it was quite a topsy-turvy trial. 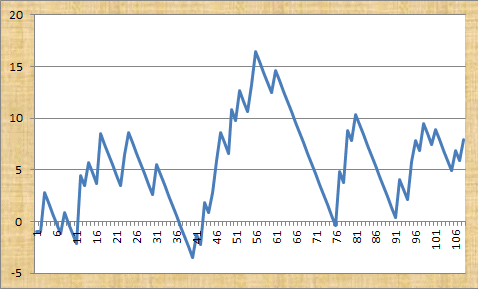 At Betfair SP, a profit of 5 points was made during the trial.

Whilst a profit was made during the trial, the bank only grew by 8% which wasn’t quite enough to warrant a passed rating for the Racing Tipster as we normally look for bank growth of 20-25% or more to award a passed rating, .

So for the time being it’s a NEUTRAL rating from us and a watching brief for now.

Ease of use:  As we say, the workload is very low here with just one bet per day on average, with tips normally sent out in the morning.

Availability of prices: Interestingly tips were sent out with the current Betfair price, rather than best bookies’ prices. We found that sometimes where the price was low (3.0 or below), it was tough to match the quoted price, but where prices were higher, we would often beat the advised prices. Ultimately the two things pretty much balanced each other out and that was backed up by the Betfair SP coming out very similar to the advised prices, with just a 3 point difference over the trial.

Strike rate: The strike rate for the trial was 26%, which is somewhat below the long-term average of 37% and may explain why the results during the trial didn’t quite match up to the longer-term ones.

Advised Betting Bank: A 100 point bank is advised when following the service and that seems very sensible to us based on the 1-point level staking and strike rate.

The Racing Tipster came into our trial boasting strong results of over 300 points profit in just over a year of tipping.

Unfortunately the results during our trial didn’t quite match those dizzy heights, but they did still manage to generate of profit of 8 points at advised prices.

Whilst it is good to see a profit was made, with the bank only growing by 8% during our trial that wasn’t quite enough to warrant a passed rating as we normally look for bank growth of 20-25% or more to award a passed rating,

So it is a NEUTRAL rating for The Racing Tipster and it’s a watching brief for the time being on this one for us.

Not much change for The Racing Tipster since our last update a few weeks ago, with 4 points lost in that time at advised prices.

That puts them 9 points up for the trial overall at advised prices.

A similar story at Betfair SP as well with 5 points lost since our last update, putting them 8 points up overall.

Not long left in the trial, let’s hope for some big results to finish things off.

The Racing Tipster has been on decent form since our last update, racking up a nice 10 points profit in that time at advised prices.

That means they are now 13 points up at advised prices for the trial overall.

Last time we noted the slightly unusual position of the Betfair SP results being better than the advised prices. Well that gap has been closed now, with the BSP results making just 2 points profit since our last update, putting them on 13 points profit overall as well.

Good to see this one moving along nicely though, let’s hope for more of the same by the time of our next update.

There’s been an unusual divergence for The Racing Tipster since our last update, with the Betfair SP results actually outpacing the advised price results.

At advised prices, there has been a 1 point loss since our last update, resulting in a net position of being 3 points up for the trial overall.

At Betfair SP however there has actually been a 5 point gain since our last update, putting them 11 points up for the trial overall.

Anyway, it will be interesting to see if the current trend of the Betfair SP beating the advised prices continues.

It’s been a good start to our trial of The Racing Tipster. After a couple of weeks, they are 4 points up at advised prices.

At Betfair SP they are actually doing a little better, with 6 points profit made so far in the trial.

This is just the kind of service we like – just one or two bets per day, all to 1 point stakes and plenty of time to get the bets on.

Today we are starting a new trial of a horse racing tipster with the very apt name of just  “The Racing Tipster.”

The Racing Tipster is apparently a tipster organisation run by a chap called Joel Ellis who has many years of knowledge and also form studying that has enabled him to devise this horse racing system.

It delivers an average of one to two horse racing tips on a daily basis in the win market in Betfair. The service can also be used with other leading bookmakers as well.

The results published on the website look very impressive and it has one of the strongest profit graphs we have seen. Just take a look at this:

Just the kind of unwavering upward growth you dream of really.

Since starting up in January 2017 the service has apparently made over 300 points profit, with an impressive strike rate of 39% and average odds of 3.88.

That works out at profit of 22 points each month and what is encouraging is that every month so far has been profitable according to their results.

Now as we always say, it remains to be seen if those results can be replicated under the spotlight of a live trial.

But there is only one way to find out, so today we will kick things off and get going on a standard three month trial.

As usual, results will be updated here regularly.

In the meantime, you can check out The Racing Tipster here.

AH Horse Racing – Final Review
Scroll to top
We use cookies to ensure that we give you the best experience on our website. By continuing we assume you accept the use of cookies. AcceptPrivacy Policy