We have come to the end of our trial of Elite Ratings System and here are the final results:

Sadly after being in profit for most of our trial, things took a decided turn for the worst for Elite Ratings System towards the end and they ended up in slight deficit at the conclusion of our 3 month testing period.

You can see how things went south for them after the half way point, made a nice rebound but then fell downwards again to finish in the red: 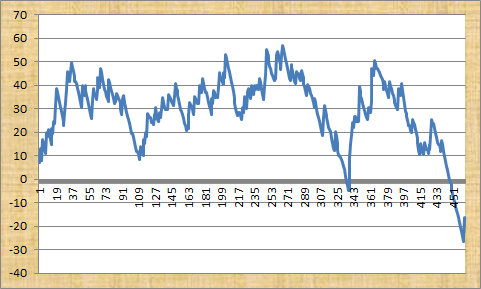 It was no disaster however, as using a 100 point bank that equates to just a 16% loss of the bank. And to be fair to them, they did hit a lot of second places in the last few weeks, so things could easily have been better.

Perhaps we just hit them at the wrong time, as Stuart who runs the service said this is the worst run they’ve been on since they started.

However, we can only judge a service on what it achieves whilst we are following it, so on that basis it has been a little disappointing to finish in a loss.

Ease of use: Quite a demanding service to follow as there are 5 bets per day on average. If you are pressed for time it might be best to just use Betfair to back the selections.

Availability of prices: Pretty good, there was certainly no stampede for prices and we were able to obtain prices fairly comfortably. There wasn’t much difference between the advised price results and Betfair SP results (just 8 points difference over 464 bets), so that seems to confirm that prices are obtainable.

Strike rate: The strike rate for the trial was 22% – which is a little lower than expected and for what would be needed to make a profit from this one.

Advised Betting Bank: A betting bank was not advised but we used a 100 point bank for the trial, which seemed adequate based on past results and proved so during the trial, as it was never close to being threatened.

We had high hopes coming into the trial of Elite Ratings System as it had amassed 800 points of profit in less than 2 years according to the results on the website and there were people claiming to have nearly paid off their mortgages by following the selections.

Well perhaps they had quite a small mortgage, or were betting with large stakes, but it certainly gave you the feeling this service had great potential.

It is also the first service we have reviewed that uses software to generate selections, so was a novelty in that sense.

And after a strong start, we thought we were on to something special here.

But sadly things hit the buffers in the last third of the trial and they have continued to struggle since our trial ended.

A loss of 16 points – which equated to just 16% of the bank – is certainly no disaster though so we feel a neutral rating is justified for Elite Ratings System.

It is one to keep an eye on to see if the recent dip in form is just a blip and they return to the form of old or whether a more permanent malaise has set in.

Unfortunately things have taken a real downturn for Elite Ratings System since our last update. They have dropped 26 points at advised prices and a whopping 46 points at Befair SP.

That leaves the totals so far for the trial at:

So still in profit on both measures, but disappointing to have seen a good deal of the profit accumulated early on being given back.

Plenty of time left in the trial though, so nothing to panic over yet.

It is more positive news for Elite Ratings System, with more profits added since our last update.

At advised prices they have added a further 15 points profit and at Betfair SP a further 4 points.

So that brings the totals for the trial so far to:

So a bit of a narrowing between the advised prices and Betfair SP, but the latter still stays ahead.

There is a lot to like about this service and we are very impressed with the results so far. Let’s hope they can continue in the same vein.

It has been an interesting time for Elite Ratings System since our last update, with a bit of a discrepancy between the results at advised prices and Betfair SP.

However, it probably isn’t in the way you would expect – it’s actually the Betfair SP that has done better, with less than one point lost since our last update two weeks ago, compared to the advised priced that have lost 19 points.

That means overall the results are as follows:

Overall we are impressed with this service so far, it looks very promising. We are only a month into our trial though so plenty of time to go.

It will be interesting to see if they can retain the strong results at Betfair SP as well, that would be a real bonus.

Always good to see the advised prices and Betfair SP results being very similar, that is encouraging. Hopefully it will continue like that for the rest of the trial.

This is a high volume service, with generally 6-8 bets per pay. The bets are normally given out the night before racing or early in the morning though, so there is plenty of time to place the bets.

So a great start – this looks very promising.

Back soon with more updates!

I got an e-mail this morning asking me if I would like to make £300 per month. I think it was a rhetorical question, but was intrigued by the possibility so decided to investigate further.

The system that promised me this useful little extra income is called Elite Ratings System and is software that claims to be able to “predict tomorrow’s winners with such accuracy that you can now fleece the bookmakers without needing to be part of an illegal race-fixing syndicate.”

Now I hadn’t actually considered becoming part of an illegal race-fixing syndicate (how do you do that by the way?) but am interested in testing the claims of this software nonetheless.

So we have signed up to trial the Elite Ratings System for 3 months and will record the results exactly as they are given out.

The results published on the website are very impressive, with over 700 points profit since the system started in January 2014 and a very steady profit graph.

The bets are mainly sent out the evening before racing, with a points system of between 1 and 3 points per selection.

There are a good number of selections each day – apart from Sunday which is their day off.

Let’s see if this one can live up to its bold sales page and deliver us nice steady profits in the next three months.

We will provide regular updates on its progress, but in the meantime you can check out Elite Ratings System here.