We have reached the end of our six month trial of The Football Guru and here are the final results:-

The Football Guru is a football tipster from the Tipping Gurus platform who was previously with Betting Gods.

We began proofing the Football Guru’s tips back in September and decided to run an extended six-month trial to get a proper look at the tips.

The tips come from right across the English and European leagues and in a wide variety of markets, with everything from corners to over/unders, Asian handicaps, goal times and of course the traditional match odds market.

Staking is between 1 and 5 points, although the average stake during our trial was 1.6 points per bet.

As well as the standard pre-match tips, there are also in-play sessions provided by the Guru each week so there is a chance to make some profits if you have the time to follow the in-play bets.

So, after six months of following the tips, how has the Football Guru got on?

We are pleased to say that it has been a fantastic trial, with 143 points profit made and 191% growth of the bank.

The strike rate for the trial was a healthy 46% and the return on investment was a solid 7%, which are good long-term, sustainable numbers.

You can see how the trial progressed in graph format below: 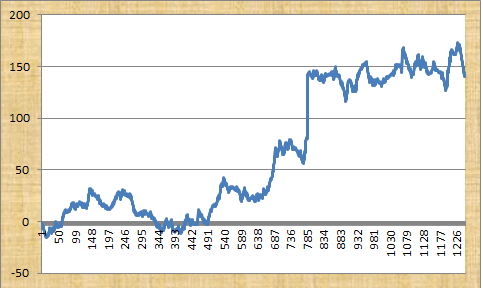 The points total was boosted quite considerably by one Goliath bet, which landed 62 points of profit in one fell swoop.

Even taking that out of the equation though, all the other bets still made 81 points profit, which represents a more than doubling of the bank in itself.

So the Goliath was clearly not just a one-off fluke – the Guru has demonstrated a clear edge over the market during six months of us proofing his tips.

All in all then this is undoubtedly a recommended rating from us and definitely one to add to your betting portfolio.

Ease of use:  It is worth noting that this a high volume service, with an average of 7 bets per day, so you do need to allow yourself some time to place the bets – say 15-20 minutes per day or abit less if you are using Betfair.

Strike rate: The strike rate for the trial was 46%, which matches exactly the long-term strike rate of the service and means that there are plenty of winners here.

Advised Betting Bank: A 50 point bank is recommended when following the service, but we think this is a little too small as there have been 40-point drawdowns over the course of the service, so we elected to use a 75 point bank during our trial. You  might want to consider a 100 point bank to be on the safe side.

The Football Guru has proved itself an excellent football tipster over the course of an extended six month live trial here at Honest Betting Reviews.

With 143 points profit made and our 75 point bank growing nearly three-fold over the course of the trial, there is no question that this deserves a recommended rating and is one of the best football services we have come across.

The only thing to be aware of is that there are a high number of bets, so do allow yourself enough time (say 15-20 minutes or so) each day to get all the bets on.

As long as you do that then you should find the Football Guru a nice easy service to follow and one that has racked up fantastic profits to date.

You can get a 14-day trial of the Football Guru for just £5 here.

Football tipster The Football Guru continues to produce excellent results, adding another 35 points of profit since our last update.

That means he is now 161 points up for the trial as a whole.

It has been really impressive stuff from the Guru and with only a couple of weeks left in the trial, this is surely headed for a recommended rating.

We will be back in a couple of weeks with our final thoughts on this one.

A small decline for The Football Guru since our last update a couple of weeks ago, with 17 points lost.

Overall though it has still been an excellent trial, with 126 points profit made to date.

It’s a very busy time now for football with all the leagues back from their Winter breaks and Champions League returning soon, so plenty of action for the Guru to get his teeth into and to build us some more profit hopefully.

The Football Guru has been on fire since our last update just before Christmas.

They have added 103 points of profit in that time, taking the total profit for the trial to 143 points, quite incredible stuff.

A large portion of the recent profits came on Saturday 14th January when they landed a stonking 8-part Goliath bet, netting 62 points in one go! Six out of the eight bets won, which brought a massive return on a total stake of just under two and a half points.

Plus of course the individual six bets themselves landed an extra 19 points.

So members were celebrating £774 of profit from just £10 stakes, a pretty nice weekend bonus!

Well done to The Football Guru, a great result and deserved reward for a consistent tipping effort over the last year or so.

We have been proofing The Football Guru’s tips for three and a half months now and things have been going very well.

So far we are 40 points up to advised prices.

This is quite an achievement considering the Guru tips in the major European leagues where value is notoriously hard to find.

One thing to be aware of is that there are a large number of bets with this service (over 600 for our trial so far) so you have be comfortable with placing a few bets per day on average. For most people that shouldn’t be a problem but just thought we would point it out 🙂

Today we are commencing a new live trial of a promising football tipster called The Football Guru.

They are based out of the Tipping Guru tipster network and are from the same person who heads up the Sports Guru, a tipster who has produced excellent results over the last 18 months, making over £4,000 profit to just £10 stakes.

The Football Guru itself has made over £2,500 profit to just £10 stakes since commencing tips around a year ago.

That works out at a very handy £214 per month to £10 stakes, which would be a pretty strong additional income. Obviously if you were able to wager at slightly higher stakes of £25 then you could have made £525 per month.

Those profits have been made with a return on investment of 15%, which is well above the level we normally see football tipsters aim for of 10%.

Importantly the strike rate is 46%, so nearly half the bets have been winners so far. This allows you to stake at decent levels and to build a bank using compound investing, if that is your style.

Bets come in the main European leagues as well as the English Football League and are in a whole range of markets, from HT/FT to over/unders, first half goals, handicaps and the more traditional match odds.

We have actually been proofing these tips for three months already, so will include those results in our review.

But we will undergo another three months of live proofing, to give us six months of tips in total.

We have written many times before about how hard it is money out of football betting, so it is always exciting to see something as promising as the Football Guru come along.

They look like a great tipster in the making, so let’s hope for good results during our trial. We will be back with our first results update soon.

In the meantime, you can check out The Football Guru here.

Get email updates on betting and trading reviews
Tweets by @honestbetting
Get Top Tips for Cheltenham!

Become a Betting VIP
We use cookies to ensure that we give you the best experience on our website. If you continue to use this site we will assume that you are happy with it.Ok
Scroll to top