We have come to the end of our three month trial of Platinum Winners and here are the final results:-

Platinum Winners is a horse racing tipping service from the Pro Betting Club stable with selections provided by a professional gambler who specialises in UK racing.

It uses a loss recovery staking system, such that you bet increasing stakes on a 1pt-2pt-3pt-4pt-5pt-6pt-7pt-8pt basis until you hit a winner or have 8 losers in a row, at which point you would reset back to 1 point.

We expressed concerns at the outset of the trial about these kinds of loss recovery systems and that they can be high risk and very costly if they go wrong.

And during the trial it very much turned out that way, as we had a number of occasions in which the 8-horse losing streak was hit.

That resulted in a big drop in our bank to over 80 points down at one stage, which can be seen in the graph below: 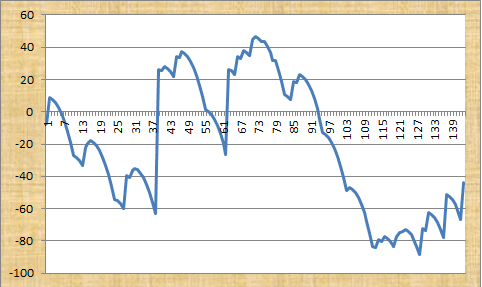 In the end we finished the trial 44 points down, which represented a 44% loss of the bank.

We also recorded results at 1 point level stakes and those results were quite a bit better, with just 21 points being lost.

Either way though it has been disappointing trial and we think the only fair verdict here is a FAILED rating given the losses incurred.

Ease of use: A pretty easy service to follow, with an average of ten bets per week. You have to login to the Pro Betting Club site before midday to get the selections and no e-mail service is offered however.

Availability of prices: All selections are advised at Betfair SP, so no problem matching the published results.

Strike rate: The strike rate during the trial was 21%, which unfortunately meant some losing streaks resulting in the max 8-bet losing streak.

Advised Betting Bank: A 100 point bank is advised for the service and at one point we were 84 points down so that did not seem nearly enough. We would suggest a 200 point bank would be more suitable given their ratcheted staking system.

It utilises a loss recovery staking system, which is an approach we do not normally recommend using.

Unfortunately those concerns were borne out during the review, with our bank going 84 points down at one stage, before finishing 44 points down in the end.

We also recorded results at level stakes and unfortunately that also resulted in a loss, although not as bad, with 21 points being lost.

Either way though it did not turn out as hoped and therefore we have to award Platinum Winners a FAILED rating at this time.

Exactly what we were warning about in our last update on Platinum Winners has ended up playing out as we feared it might.

Basically we warned last time about the dangers of ratcheted staking plans like that used for Platinum Winners where you increase your stakes progressively until you hit a winner.

In this case they keep increasing the stakes until they hit a winner or lose 8 in a row, at which point you would have lost 36 points overall in the run of 8 bets.

Well that has happened not once, not twice but three times since our last update, meaning they lost a whopping 100 points in October.

That puts them on -77 points for the trial overall.

A fairly disastrous set of results there then.

As we also said in our previous update, we wanted to record results at level stakes for these very reasons.

At level stakes things haven’t been nearly as bad, with 18 points lost since our last update and 24 points lost for the trial overall.

It has been a good start to our trial of Platinum Winners, at advised stakes at least (more on that below).

They are 22 points in profit to advised stakes, a healthy return after just over one month.

However, as we say that is at advised staking, which is a progressive staking method that is quite aggressive.

Basically, you bet increasing stakes on a 1pt-2pt-3pt-4pt-5pt-6pt-7pt-8pt basis until you hit a winner or have 8 losers in a row, at which point you would reset back to 1 point. So if you have a losing streak of 8, you will have lost 36 points.

This kind of staking will not suit everyone, so we have also recorded results at 1pt level stakes. On that basis, we are actually 6 points down.

So just be aware of the staking system involved if you are going to sign up to Platinum Winners.

It’s been a while since we have reviewed any services from the Pro Betting Club, so today we are pleased to get a new trial underway of one of their premier services, Platinum Winners.

It is a horse racing tipping service with selections provided by a professional gambler who specialises in UK racing.

Apparently all selections are carefully researched, which is reassuring (we wouldn’t want them picked at random would we?) and there are on average 3 bets per day.

The good thing about the bets is that they can all be placed at Betfair SP and that’s how results are recorded, so there is no need to go frantically searching for the best bookies price when tips are sent out like some other services.

They started tipping at the beginning of 2017 and results to date look very impressive, with over 330 points profit made.

Six out of the seven months so far have been profitable and the strike rate has been around the 25% mark so far.

A 100 point bank is recommended for following the service, which seems pretty reasonable, although we will see during the trial if that is sufficient to withstand losing runs and drawdowns.

Anyway, without further ado we will get things underway and look forward to seeing how things go with this one.

In the meantime you can check out Platinum Winners here.

Robert Fraser’s Tennis Tips – Final Review
Scroll to top
We use cookies to ensure that we give you the best experience on our website. By continuing we assume you accept the use of cookies. AcceptPrivacy Policy