Here at Honest Betting Reviews, we don’t like to just review a service for three months and then forget about it.

No, we like to keep monitoring services to see if they continue meriting the original rating we gave them.

So in that spirit, today we are updating a service we have been following for close to 20 months – the Racing Consultants.

This is a horse racing tipping service with tips provided by two industry experts, Rory Delargy and David Massey.

They originally gained an approved rating from us, notching up a very impressive 135 points of profit during the three month trial back in 2015.

It has been something of a rollercoaster ride since then though, with good profits made in the remainder of 2015 following our trial, but then a tough 2016, with a loss of 17 points made on the year.

Thankfully 2017 has started off more positively, with 60 points of profit having been made to date.

Overall then since we have been following them, the Racing Consultants have made 255 points profit, which is a decent total.

And since the service started in June 2014, they have made 545 points profit. The yearly totals are as follows:-

So if you had been following them right from the start, you would have done very well.

However, we can only speak of how they have done from when we started monitoring the tips, so what is our feeling now after 20 months?

We believe that having made profits of over 250 points since we started following them, the Racing Consultants are still deserving of a recommended rating.

We recognise however that many people will have found the going very tough during 2016 and to have made a loss over the course of a whole year is disappointing.

The majority of punters will have deserted them during 2016, which is understandable given that you would have to pay subscription fees on top of having lost money.

We have come to the end of our three month trial of the Racing Consultants and here are the final results:

Normally when we hear the words “industry insiders” we make sure our wallets are firmly closed and head for the exit as quickly as possible.

It is usually the fastest way to the poor house to follow so-called “experts” who claim to have some kind of inside knowledge that will make you untold riches. The vast majority of the time it is either lies – they don’t have any special insights – or the info they do have is worse than useless.

So we have been pleasantly surprised by the achievements of two well-known racing industry professionals, Rory Delargy and David Massey, during our trial of their Racing Consultants service.

David Massey – aka “Chutney Dave” – is also a  commentator on William Hill Radio and works for Bet Racing Nation.

To be fair, their “industry insiders” tag is more to do with the fact that they work in the business and so living and breathing it every day has given them a great depth of knowledge, rather than being given any mysterious “inside info” about horses supposedly due to run well.

The hard work they put in has clearly paid off as they amassed a superb 135 points profit during our trial at advised prices and 129 points profit at Betfair SP. 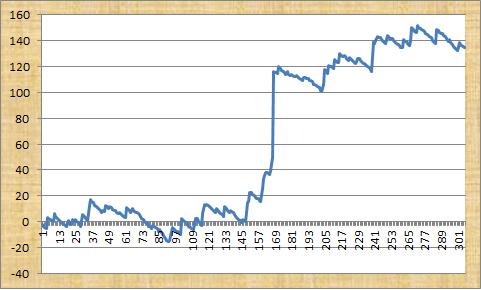 As you can see, a very dramatic jump occurred around half way through the trial, when they landed an audacious 66/1 double – whilst backing the selections as singles as well.

That gave the results a boost of about 80 points in one fell swoop. Even taking that out of the equation though, they still made over 50 points profit from all their other selections, which is none too shabby.

You will note the very close totals there between advised prices and Betfair SP, which is very encouraging. So you should be able to just about match the published results just using Betfair.

You can view a full reasoning behind the tips each day via the website and it is reassuring to see the amount of work that has gone in to producing the selections.

Looking at their performance overall, they have made just under 400 points profit since the service started in June 2014. That equates to 25 points profit per month.

Now we haven’t officially proofed the previous results prior to our three month trial, but we have been subscribers to the service since late 2014 so can testify that the published results are accurate.

They have shown a decent level of consistency too, with 12 out of 16 months being winning months.

So a definite pass rating for the Racing Consultants. Let’s have a look now at how the service breaks down.

Ease of use: OK – there are on average 3.4 bets per day, so a bit of time is needed each day to put the bets on.

Availability of prices: OK – tips are normally sent out in the morning, with best bookies prices quoted. Some of those prices do get pushed in initially. But with the Betfair SP results nearly equaling the advised prices, that should not be a problem.

Strike rate: The strike rate for the trial might be a little low for some people’s tastes at 15%. That means there are some losing runs to cope with and patience is required if you want to follow this service.

Advised Betting Bank: The advised betting bank is 100 points which we think is just about OK. There have been a couple of 40-odd point drawdowns over the lifetime of the service, so if you wanted to be on the safe side we think a 150 point bank would be advisable.

Overall we have been very impressed with the results achieved by the Racing Consultants. We were perhaps a little lucky to hit them at their best time, with a double that added 80 points to the bank landed during our trial.

At the same time though, they do advise quite a few of these special bets, a number of which have been close, so were maybe due one coming in for them.

Even leaving that aside however, they still made over 50 points profit during the trial. And the fact that the Betfair SP results almost matched the advised price results means you should be able to achieve close to the published results – which is not something you can say about every service we review here.

So in summary we are delighted to find some “industry insiders” who actually know what they are doing for once and put in genuine hard work to achieve great results for their subscribers.

You can check out the Racing Consultants here.

The Racing Consultants continue in excellent form, adding another another 25 points of profit at advised prices and 22 points at Betfair SP.

That brings their totals for the trial to:

The highlight of recent results was Go Far at Ayr on 18th September which was tipped at 25/1 and won at a Betfair SP of 28.

This has been superb stuff during our trial and with under two weeks to go we can only think a passed rating awaits them.

We will return soon with our trial conclusion and final verdict, but in the meantime you can check out the Racing Consultants here.

The Racing Consultants have been in fantastic form since our last update, producing a superb 88 points of profit at advised prices and 96 points profit at Betfair SP.

That means their totals for the trial now stand at:

Their results were helped greatly by a magnificent double a couple of weeks ago at Catterick, where they firstly landed Di’s Gift at 5/1 and then followed it up with Llewellyn at 10/1 an hour later.

They backed not only the singles but also a double at 66/1 to give 78 points profit on the day. Awesome stuff!

That now means they have more than doubled the bank since the beginning of our trial two months ago. Highly commendable work from the lads.

We have just under a month to go on this one, but barring some kind of dramatic collapse a la the Australian batting line-up, this one looks headed for the winning systems list.

We will be back soon with further updates.

In the meantime you can check out the Racing Consultants here.

The turnaround at the Racing Consultants continues, as they have notched another 33 points of profit since our last update ten days ago.

Most of the recent winnings came on one cracking day at Carlisle on Monday, when they not only landed winners in the form of Royal Holiday and Mash Potato, but even got the place part of an each-way double.

Good to see this one doing well, let’s hope the positive form continues. We will be back with further updates soon.

In the meantime you can check out Racing Consultants here.

It has been a bit of a turnaround for the Racing Consultants over the last couple of weeks, with 13 points profit bagged over the past fortnight.

They have been helped by a few nice winners recently including Jungle Bay at 16/1, Rodrigo de Torres at 13/2 and Shell Bay at 6/1.

Let’s hope the upturn in fortunes continues for a while longer.

It’s been a tougher week this week for the Racing Consultants, who have suffered something of a reversal of fortunes.

Here are their results for this week:

And overall since our trial started:

Let’s hope they can get back on track next week.

Here are the results for Racing Consultants up to 22nd July 2015:

So a solid start, let’s hope things continue in the same vein for the Racing Consultants.

We are starting a new trial today of a horse racing tipping service called the Racing Consultants.

Rory is a commentator on Timeform Radio and Will Hill Radio, as well as an Irish Field Naps Correspondent.

David Massey – better known as “Chutney Dave” (dare we ask why?) – is also a  commentator on William Hill Radio and a Bet Racing Nation correspondent.

Being two industry experts, you would expect them to know their stuff, but that doesn’t always translate into profitable gambling. I can think of plenty of so-called “experts” who you would in fact do better choosing selections by randomly sticking a pin in your racing post than following their tips.

However, these guys’ results are very impressive, having notched up 300 points profit since they started the service just over a year ago.

Let’s see if they can keep up that level of performance during our trial.

In the meantime, you can check out the Racing Consultants here.

What is a Double Chance Bet?
We use cookies to ensure that we give you the best experience on our website. By continuing we assume you accept the use of cookies. AcceptPrivacy Policy
Scroll to top