We have completed our three month trial of the The Racing King and here are the final results:

We seem to have a bit of a theme at the moment – neutral reviews.

We have another one here with the Racing King (formerly the Each Way King). This one is at least a bit more straightforward than the previous two which fell slightly between two stools and were difficult to grade.

But this has ended up just 3 points down after three months so there seems no other fair verdict than a neutral rating.

Things got off to a promising start as they went over 30 points up early on, but sadly those early gains were given away in a steady trend downwards, as you can see below: 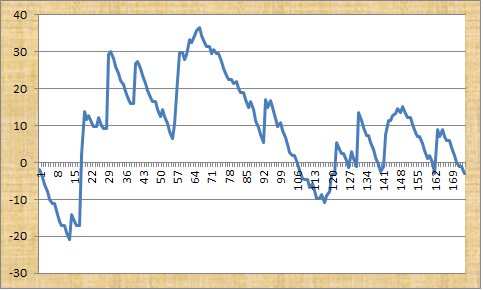 It’s a nice easy service to follow with just two bets per day and betting each way means you have a higher strike rate so the losing runs are shorter.

For the time being though, this is one to watch and to see if results pick up over the longer term.

Ease of use: There are just 2 bets per day on average and workload is minimal with this service – should only take a few minutes each day to place the bets.

Availability of prices: There was no issue with the availability of prices, although there was a small difference between the advised prices and Betfair SP (14 points over the course of the trial) so it may be best to take early prices to make the most of the service.

Strike rate: The strike rate for the trial was 28%, which is just very slightly below the long-term average of 29.5%.

Advised Betting Bank: No bank was advised when we signed up so we used a 100 point bank, which was more than comfortable for the trial.

It has been one of those slightly quiet trials for the Racing King where not a great deal has happened to be honest.

Fortunes have fluctuated a little bit during the trial but in the end they finished 3 points down, so very close to breaking even.

It’s a nice easy service to follow and betting each way gives you shorter losing runs, which is always appreciated.

So after just about breaking even, the only reasonable verdict seems to be a neutral rating. We will keep an eye on the Racing King for a while and see where the service ends up going.

You can check out the Racing King here.

*Please note this service was previously called the Each Way King and was part of the Betting Gods network.

It’s been a case of treading water really for the Each Way King since our last update, with just one point lost at advised prices and 4 points lost at Betfair SP.

That means for the trial overall they are 1 point up at advised prices and 12 points down at Betfair SP.

With just a couple of weeks left in the trial it will be interesting to see if they can push on and finish in profit.

Back with our final review soon.

There has been something of a reversal for the Each Way King since our last update just over a month ago.

They have dropped 25 points at advised prices and 26 points at Betfair SP over the last month.

That means they are just 2 points in profit at advised prices and 8 points down at Betfair SP for the trial as a whole.

Hopefully there will be an upturn for them as we head into the New Year. Back soon with more updates.

It has been a good start to our trial of Each Way King, who are 27 points up at advised prices and 18 points up at Betfair SP after three weeks of results.

This is a fairly easy service to follow, with just a couple of bets per day.

We are noting a bit of a gap opening up already between advised prices and Betfair SP though, so this will be something to keep an eye on.

Anyway, a good start to the trial and let’s hope they continue in the same vein.

It would be fair to say that most tipsters like to bet “on the nose” as it were. It is about picking winners they would say. To be fair there is a certain attraction about the simplicity of that approach.

However, on the other side you have those who would argue that backing each-way allows you to profit when your horses run well but don’t quite get the job done, whether it be due to bad luck, ill-suiting conditions or just not quite being good enough on the day.

Another advantage to backing each-way is that it enables you to build a bank more steadily, with a higher strike rate and shorter losing runs.

Anyway, whichever approach you prefer, sitting squarely on the latter side of the argument is a new service we are trialing, Each Way King from the Betting Gods stable.

Well so far the each-way style certainly seems to be working for them, with over 170 points profit accumulated since the service started in June.

That has been achieved with a 30% strike rate and 35% return on investment, which is excellent going.

Staking is nice and simple at between 0.5 and 1 points each way on each selection, so no crazy staking system to inflate results.

There are generally around 2 bets per day, so it should be fairly manageable in terms of workload.

We will run our normal three month trial and see if this can deliver us some royal profits.

In the meantime, you can check out Each Way King here.

Barney Curley: The Master of the Betting Coup
Scroll to top