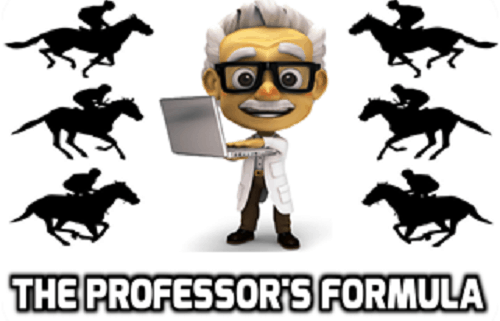 We have reached the end of our three month trial of the Professor’s Formula and here are the final results:-

The Professor’s Formula is a horse racing tipster from the Tipster Street stable, who specialises in flat racing on both the turf and all-weather.

Sadly the Professor has had one of those trials where pretty much everything has gone wrong and we have ended up 57 points down in the end.

As you can see from the graph below, at one stage we were actually over 80 points down, so in some ways it could have been worse. 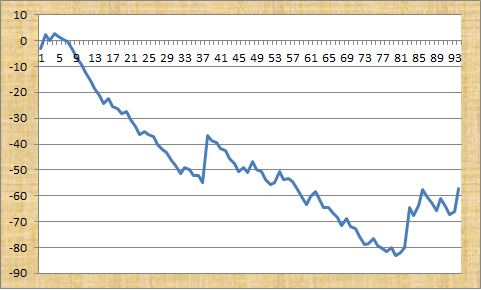 Either way though it has been a painful trial and we have no choice but to award the Professor’s Formula a FAILED rating unfortunately.

Of course it could just be one of those instances where we caught the service at a bad time, but any service that loses such a large portion of your bank will test the patience of any gambler and will be too much for most to bear.

Ease of use:  There is approximately just one tip per day, which is sent out in the morning of racing.

Availability of prices:  With Betfair SP used for all tips, you know you can match the published results.

Strike rate: The strike rate for the trial was 26%, which in itself is no disaster, but there were no really big winners in there to make the low strike rate profitable.

Advised Betting Bank: A 100 point bank is advised for following the service, which came close to being wiped out at one point as we went over 80 points down.

Unfortunately with 57% of our bank being lost over the trial, The Professor’s Formula has failed to make the grade and is not a service we can recommend at this stage.

On to the next trial for us…

It has been a rough old ride for followers of the Professor’s Formula in recent times.

Since our last update a month ago, the Professor has dropped another 13 points meaning he is now 66 points down for the trial overall.

There isn’t long left in the trial now so it looks like this one is headed for the failed pile unfortunately, barring a big winner being hit to turn things around.

Horse racing tipster The Professor’s Formula has continued to struggle, with another 7 points lost since our last update.

That means the Professor is now 53 points down for the trial as a whole.

Hopefully he can land one of his big-priced winners and really turn things around for his followers.

The tough times have continued for horse racing tipster the Professor’s Formula, with another 21 points lost since our last update.

That puts the Professor 46 points down so far.

Just a reminder that all results are recorded at Betfair SP, so the advised prices and BSP are the same in this instance.

It’s been a rough old start for horse racing tipster The Professor’s Formula, with 25 points lost so far.

This is one of those rare services which uses Betfair SP to record results, which is refreshing because you know prices are obtainable and results are not inflated.

Although it has been a slow start, to be fair they tip at high odds, with selections up to 70/1, so there are likely to be losing streaks when following this service.

Hopefully things will have picked up by the time of our next update.

After recently commencing a trial of a promising Tipster Street service – Shane Murphy’s Irish Tips – we thought we would follow it up with another.

This time it is the turn of the intriguingly named The Professor’s Formula.

It is a horse racing service that has been running for over two years and in that time has produced 320 points profit.

Although they don’t give away what the formula is – understandably – it is applied to flat turf and all weather racing only.

Of particular note is the fact that it uses the exchanges, which I know will appeal to many of you who have lost access to their bookie accounts.

The Professor has landed some massive winners in his time tipping, including Petite Jack at Lingfield in June last year at a whopping BSP of 59.74, which netted a very pleasant 167 points profit.

The average monthly profit is a healthy £525 to £25 stakes and the return on investment is an impressive 35%.

With a strike rate of 39%, the Professor has some impressive metrics that give us encouragement that this may be a top service.

Only time will tell of course, so we will run our normal three month trial here and will report back soon on how things are progressing.

In the meantime, you can check out the Professor’s Formula here.

Is Matched Betting Legal?
Scroll to top
We use cookies to ensure that we give you the best experience on our website. By continuing we assume you accept the use of cookies. AcceptPrivacy Policy