We have come to the end of our six month trial of Robert Fraser’s Racing Tips and here are the final results:-

It is one of the very few services that tips at Betfair SP, meaning the results are obtainable for everyone with access to Betfair and for those in countries that don’t have access, you may well be able to beat the results by using a range of bookies.

As the ability to make a profit at Betfair SP is such a sought-after commodity, we thought it would be worth doing an extended six-month trial here to see if Robert Fraser could manage to crack it.

Unfortunately though even with the extended period to overcome the temporary ups and downs you often see with tipsters, we didn’t end up generating a profit and finished 30 points down for the trial.

You can see how the trial went in the graph below. 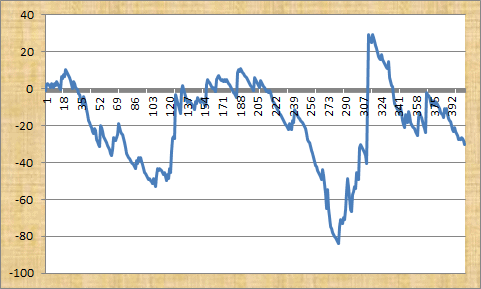 That worked out as a return on investment of -5% and a 20% loss of the bank, which are disappointing figures.

Overall then we feel the only fair verdict here is a FAILED rating and this is not a service we will be adding to our portfolio at the current time.

Ease of use: With an average of just two bets per day and all placed at Betfair SP, it is one of the easiest horse racing services you will find to follow.

Availability of prices: As we say, with bets placed at Betfair SP there is no problem with price availability and you may even be able to beat the advertised results with a little work.

Strike rate: The strike rate during the trial was 22%, which is somewhat below where it needed to be to generate a profit at the prices tipped at.

Advised Betting Bank: A 150 point bank is advised for following the service which seems about right to us. We had lost about 50% of our bank at the low point of the trial but recovered in the latter part.

Making a profit at Betfair SP is kind of the holy grail for horse racing tipsters as it would mean a service is practical for everyone to follow and make some money from.

We gave Robert Fraser’s Racing Tips an extended six month trial to see if it could deliver that holy grail but sadly it ended up falling short, finishing 30 points down in the end.

With that representing a 20% loss of the bank, we feel we have no choice but to give this a FAILED rating based on those results and it is not a service we can recommend at this time.

However, there is better news for Robert’s tennis tipping service which we will be finishing our review of shortly, so watch out for that.

It’s been an excellent turnaround for Robert Fraser’s Racing Tips, which were 73 points down at the time of our last update.

We are pleased to report they are now just 8 points down, so a huge improvement of 65 points since our last update.

Just a reminder that this service tips at Betfair SP, so there is obviously no need to record those results separately.

Let’s hope the recent recovery in form can continue for Robert.

It has been a complete nightmare lately for Robert Fraser’s Racing Tips, which have lost a whopping 78 points since our last update just over a month ago.

That means we are now 73 points down for the trial overall, a pretty woeful position.

This has just been one of those situations where everything that can go wrong has gone wrong. The service started with high hopes and a lot of hullabaloo, but sadly so far it has failed to live up to those high expectations.

We will follow this for a little longer, but barring a spectacular turnaround, unfortunately it looks like it is heading for the failed pile.

There has been a good turnaround for Robert Fraser’s Racing Tips, with 32 points profit made since our last update.

That means we are 5 points up for the trial overall.

Just a reminder that this service tips at Betfair SP, so the results are that much more impressive than most other services which use early bookies’ prices.

Not long left in the trial now so lets hope for a big finish from Robert.

A small improvement for Robert Fraser’s Racing Tips since our last update a month ago, with 4 points profit made.

Unfortunately though we are still 27 points down for the trial overall.

Just a reminder that this is a service that backs at Betfair SP only so it is always going to be tougher to make a profit doing that than taking best prices from the bookies.

A month to go in our trial so hopefully enough time for Robert to turn things around.

It has been a tough time for Robert Fraser’s Racing Tips since our last update a couple of weeks ago, with 31 points having been lost in that time.

That means we are also 31 points down for the trial overall.

These results seem to track the general trend at the moment in that a lot of tipsters seem to be having a tough time. It could be due it being early in the season and form hasn’t settled down yet, with changeable ground also adding to the difficulties.

Whatever the cause though, let’s hope things pick up for Robert and the other tipsters soon.

It has been a fairly uneventful start to our trial of Robert Fraser’s Racing Tips, with 0.3 points of profit made so far.

Basically then we are at the same point as where we started a couple of weeks ago.

Just to recap that this is a service which uses Betfair SP for all tips, so you know you can match the published results and if this does well, then we may have found the holy grail of horse racing tipping – something that makes a profit at Betfair SP!

Anyway, a quiet start so far but very early days so plenty of time to step things up.

For many people it is the holy grail of betting: finding a strategy that works at Betfair SP.

So many of us have lost our accounts with the bookmakers and now have to turn to the exchanges to try and find some profit.

However, so many betting systems and strategies rely on use of the bookies and simply do not work at Betfair SP.

Well, today we are hoping that we may have found the answer.

It comes in the form of a horse racing tipster called Robert Fraser from the reputable Betting Gods network of tipsters.

He bets entirely at Betfair SP and records his results as such, so there is no worrying about whether you will be able to match the advised prices etc.

Robert’s results so far are pretty formidable, with 140 points profit made in just over 3 months of tipping.

That has been achieved with a very healthy strike rate of over 40% – meaning lots of winners – and an excellent return on investment of 64%.

It is quite a selective service, with generally just 1 or 2 bets per day, so a very manageable service to follow.

It is obviously early days with the service after only three months, but that is why we are keen to start a live trial here at Honest Betting Reviews and see if those results can be maintained in the longer term.

If they do, then as we say, this may well be that holy grail of betting: something that is profitable at Betfair SP!

You can check out Robert Fraser’s Racing Tips here.