Update 27.01.19 – Please note as of today this service has been discontinued.

We have reached the end of our six month trial of Robert Fraser’s Tennis Tips and here are the final results:-

Robert Fraser is a tipster on the Betting Gods network and we have just completed an extended six month trial of his tennis tips.

So it was great delight that following the completion of our extended trial, we can now add a third to the list in the form of Robert Fraser’s Tennis Tips!

Yes indeed it has been a superb trial for Robert, who racked up an amazing 185 points of profit in the six months we followed his tips.

That represented a return on investment of 24%, which is highly impressive for a tennis service and with a strike rate of 35%. 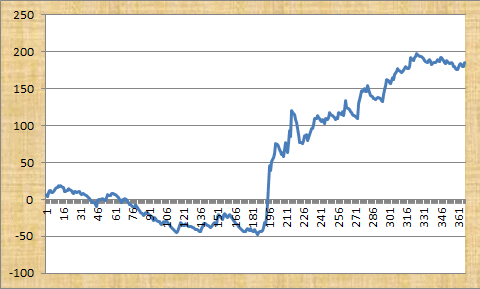 As you can see in the graph above, things moved fairly slowly in the first half of the trial but really took off in the second half, blasting more winners than Roger Federer!

Overall it has been an excellent trial and we are very pleased to award Robert Fraser’s Tennis Tips a PASSED rating.

Ease of use: A pretty easy service to follow, with an average of two bets per day. With tips sent out with plenty of time before matches, you should have no problem getting your bets on in time.

Availability of prices: With tennis markets so liquid on the exchanges like Betfair, there is not usually much movement in prices and we had no problem matching the advised prices.

Strike rate: The strike rate during the trial was 35%, which matches the long term average of the service.

Advised Betting Bank: A 100 point bank is advised for the service. We did go 45 points down at one stage which is a little bit higher than we would like in terms of a percentage of the bank, so perhaps a 150 point bank would be advisable to give sufficient leeway for losing runs.

It has been a superb trial for Robert Fraser’s Tennis Tips and we have no hesitation in saying this is the best tennis tipster we have ever come across.

A fantastic 185 points of profit was made during the trial, meaning the bank grew by 185% – or close to trebling its starting level.

Those are the kind of results you dream of really so this is a definite PASSED rating for Robert Fraser’s Tennis Tips. Fantastic stuff.

There’s been a massive turnaround for Robert Fraser’s Tennis Tips since our last update a month ago.

There has been something of a change in the staking though which explains part of the improvement in performance, with a number of 8-10 point win bets rather than the previous 1-3 point win bets with the odd 5 point bet.

Whether that is a temporary change based on some very strong selections for Robert or a permanent restructuring of the service we will wait and see, but either way it has been good to see the turnaround in form and long may it continue.

It is continuing to be tough going for Robert Fraser’s Tennis Tips, which have lost a further six points since our last update.

That means we are now 42 points down for the trial overall.

So trying to find another profitable tennis tipster is proving to be elusive. Hopefully things can turn around shortly for Robert.

Unfortunately it has been a tough time lately for Robert Fraser’s Tennis Tips, which have lost 30 points since our last update at the start of July.

That means we are now 36 points down for the trial overall.

It was a rough grass court season for Robert, but hopefully now with things moving on to the hard courts we will see a bit more predictability and an improvement in results.

Not much movement for Robert Fraser’s Tennis Tips since our last update, with just 1 point lost over the last three weeks.

That means we are now 6 points down for the trial overall.

Lots of potential for profit as we get into the heart of Wimbledon now so hopefully by the time of out next update we will have some more positive news to report.

A bit of a slow start to our trial of Robert Fraser’s Tennis Tips, which are 5 points down so far after three weeks.

We did actually go 19 points up at one stage, but a tough run through the French Open has dragged things down unfortunately.

Still, very early days and plenty of time to get back into profit again.

With Summer on the way it seems like a good time to get a new trial of a tennis tipster underway.

It won’t be long before the tennis circuit heads to Paris for the French Open and the second grand slam of the season, followed of course by the grass court season and the magic of Wimbledon.

So far this season has been like rolling back the years with Federer and Nadal dominating proceedings, whilst Murray and Djokovic have had their struggles.

Roger has chosen to skip the rest of the clay court season to concentrate on trying to win Wimbledon again, which may prove to be a wise choice come July.

Meanwhile Rafa looks like a solid favourite to capture his tenth French Open title, which would be quite a staggering achievement.

So all in all it is set to be a fascinating few months of tennis and a great time to jump on board a promising tennis tipster.

The one in question is called Robert Fraser’s Tennis Tips, who you may know from his other service providing horse racing tips.

In terms of his tennis tips, Robert has amassed an impressive 200 points of profit since commencing tipping in February this year.

That has come at a sterling return on investment of well over 50% with a strong strike rate of 42%.

So far betting £10 per point would have made you over £500 per month profit, although bear in mind that staking is up to 10 points per selection so that would entail up to £100 per selection at those stakes.

If these results could be repeated long term then it would be mighty impressive.

We only one tennis service we have approved so far and that is Tennis Genie.

Let’s hope Robert Fraser ends up being added to that list.

We will run a standard three month trial of this one and will report back soon on how things are going.

In the meantime you can check out Robert Fraser’s Tennis Tips here.

Welsh Grand National Preview: Rock the Kasbah Has Chepstow Pedigree
Scroll to top
We use cookies to ensure that we give you the best experience on our website. By continuing we assume you accept the use of cookies. AcceptPrivacy Policy