We have reached the end of our three month trial of Robert’s Goal Trader Syndicate and here are the final results:-

Robert’s Goal Trader Syndicate, despite what the name may suggest, is a horse racing betting service that provides daily tips for UK racing.

It is run the same person behind TennisTips.co.uk, which we have reviewed previously here at Honest Betting Reviews.

The first thing to remark on with the Goal Trader Syndicate is that staking is very variable.

Having said that, the one 1,000 point bet came before our trial started and during the trial the biggest stake has been 200 points (which we had once) and few 100 point bets.

So if you are using the service then you need to have a pretty big bank and be prepared for some big stakes on a few of the bets.

In terms of results, it has done well, finishing with 368 points profit to advised prices at a return on investment of 14%.

As you can see below, it was a little up and down but overall always in positive territory. 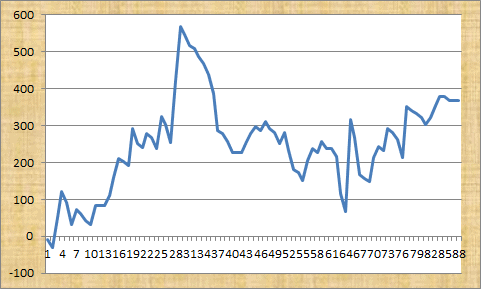 What is interesting though is that the results at Betfair SP were actually quite a bit better, finishing with 661 points profit.

It is very rare to have a service that does better at Betfair SP than advised prices, so that is quite a USP for the Syndicate.

The only thing to note is that with a large bank required, the profit accrued during the trial only translated into 25% bank growth at advised prices or 44% at BSP, which is very respectable but isn’t as much as some other services we have reviewed here.

All in all though it has been a good effort and we are pleased to say that Robert’s Goal Trader Syndicate is awarded a PASSED rating.

Ease of use:  There is around one tip per day, with bets sent out late in the evening (quite consistently between 10pm and 11.30pm), so an easy service to follow.

Strike rate: The strike rate for the trial was 35%, which is pretty solid.

Advised Betting Bank: We used a 1500 point bank for the trial, which with a 35% strike rate and average staking at 30 points per bet should be enough, but if you wanted to be more cautious we would recommend a 2,000 point bank.

Robert’s Goal Trader Syndicate is a horse racing tipster who takes a selective approach to betting.

The service racked up an impressive 661 points profit at Betfair SP over our three month trial, which warrants a PASSED rating.

The staking is a little crazy, with stakes between 10 and 200 points, so ideally we would like to stakes a little less variable.

So you need a big bank and to be prepared for those occasional big stakes when following the service.

But to have achieved a clear profit at Betfair SP and beat the advised prices is a decent achievement and marks this out as quite a unique service.

There has been an interesting – and unusual – divergence in results for horse racing tipster Robert’s Goal Trader Syndicate since our last update just over a month ago.

At advised prices, there has been a small decline over that period, with 50 points lost.

At Betfair SP however, there has actually been an improvement, with 67 points profit being made.

That means that at advised prices, we are 262 up points up for the trial, but at Betfair SP we are 466 points up.

It is a rare thing to be significantly better off at Betfair SP than advised prices, so we will keep an eye on this and see if it is maintained in the long run.

If so, it could be a real plus for the service, with so many other services struggling to make a profit at Betfair SP.

It’s been a good start to our trial of Robert’s Goal Trader Syndicate, a horse racing tipster from the man who runs tennistips.co.uk.

So far we are 312 points up at advised prices after just over a month.

At Betfair SP things are even better, with 399 points profit made so far.

As we remarked at the outset, staking is very variable, with anything from 10 to 200 points being staked per selection.

So that is worth bearing in mind if you are following the service and setting an appropriate bank accordingly.

Occasionally you are asked to review something and can get the wrong end of the stick as to what it is all about.

This was the case initially with Robert’s Goal Trader Syndicate, which upon seeing the name we thought was a football trading system – or perhaps even tennis as it is part of the Tennis-Tips website.

However, we learned upon closer inspection that it is nothing to do with either football or tennis, but is actually a horse racing service.

Secondly, with the word “Trader” in the title, you could be forgiven for thinking this was a trading system. In fact, it is just a straightforward tipping service with no trading involved.

Thirdly, it doesn’t appear to be much of a syndicate in the traditional sense of the term, rather it is just Robert’s tips which he shares with a small group of followers.

So it reminds me a little bit of the old saying about the Holy Roman Empire – that it wasn’t holy, Roman, nor an empire.

Anyway, enough about the name – that is not really important.

What is important is whether the service can produce regular profits and make some money for us punters.

It hasn’t been going long but results so far look promising.

Since starting out in December of last year, Robert has made over £14,000 profit.

Before you get too carried away with that figure though, please note that staking is high, with stakes ranging between 10 and 1,000 points.

So there probably aren’t too many of you out there who can stake £1,000 on one bet.

However, the return on investment is very good at 120%, so even at lower staking you would have done well so far.

The strike rate has been good so far as well at 37%, so a good proportion of winners.

So looks pretty decent all in all.

Although Robert runs another service we have reviewed – Tennis Tips – horse racing is actually his main speciality. Over the years he has refined his strategy and analytical methods and his horse racing betting makes up a significant part of his annual income now.

Let’s hope we can add to our own annual income with his tips. We will run our normal three month trial of this one, – which we started receiving tips on from 16th Feb – and will update results regularly.

In the meantime you can check out Robert’s Goal Trader Syndicate here.

Europa League Final – Free Bets!
Scroll to top
We use cookies to ensure that we give you the best experience on our website. By continuing we assume you accept the use of cookies. AcceptPrivacy Policy