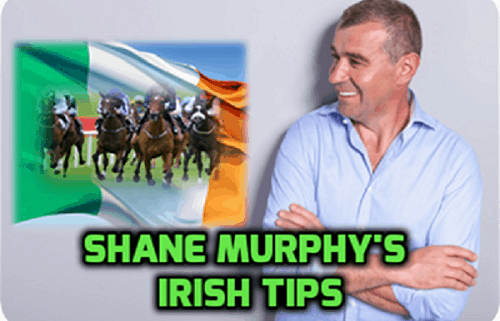 We have reached the end of our three month trial of Shane Murphy’s Irish Tips and here are the final results:-

Shane Murphy’s Irish Tips – as you may have guessed from the name – is a horse racing tipster from the Tipster Street stable specialising in bets on Irish racing.

Unfortunately it has been a tough trial for Shane, with a loss of 23 points at advised prices over the three months and 38 points at Betfair SP.

That equates to a loss of 23% of the advised starting bank, which is just low enough to warrant a FAILED rating sadly.

However, we don’t think this is a fatally flawed service and the results prior to our trial were good, with three successful years of betting, so we will continue to monitor with a view to a potential upgrade if results improve.

Ease of use:  There are approximately 1.5 tips per day, which are sent out in the morning of racing.

Availability of prices:  The prices were generally freely available, although the results at Betfair SP were somewhat lower so it pays to use the bookies if you can.

Strike rate: The strike rate for the trial was 32%, which is solid but a bit below where it needed to be to generate a profit at the prices the tips are given at.

Advised Betting Bank: A 100 point bank is advised for following the service, which seems reasonable and should be sufficient to cover losing runs.

Unfortunately it has been a tough trial for Shane Murphy’s Irish Tips, which made a 23 point loss in the three months we proofed the tips.

On the basis of those results we have to award the service a failed rating sadly, but at the same time we don’t think the service is inherently flawed and it may well have just been that we hit it at a bad time.

So we will keep an eye on things and see if results improve over the coming months.

It continues to be a struggle for Shane Murphy’s Irish Tips unfortunately, with another 5 points lost at advised prices since our last update.

That means Shane is now 40 points down for the trial at advised prices.

At Betfair SP, there has been no change since our last update and Shane is still 51 points down for the trial overall.

So sadly it doesn’t look like this one is going to make the grade as we approach the end of the trial, but as we often say it goes to show how hard this tipping game really is.

It’s been a rough old run for Shane Murphy’s Irish Tips, with 27 points lost at advised prices since our last update.

That means Shane is now 35 points down for our trial overall.

At Betfair SP things are even worse, with 30 points lost since our last update and 51 points lost overall for the trial.

All we can say is – let’s hope things turn around for Shane, and fast!

Not much change for horse racing tipster Shane Murphy since our last update, with one point gained at advised prices.

That means Shane is now 8 points down for our trial overall.

At Betfair SP things have been a little worse, with 10 points lost since our last update and 21 points lost overall for the trial.

Hopefully things will pick up for Shane by the time of our next update.

It’s been a slow start to our trial of Shane Murphy’s Irish Tips, with 9 points lost so far to advised prices after a couple of weeks.

At Betfair SP things are very similar, with 11 points lost so far.

It is very early days so nothing to get too concerned about at this point.

One thing to be aware of when following a tipster who specialises in Irish racing is that there are a lot less races than in UK racing. For example, you often go two or three days without any races at all.

So patience is a watchword here, but Shane’s long term results are very good so hopefully it will be worth the wait.

Today we are commencing a new trial of a horse racing tipster who specialises in Irish racing.

The name of the tipster is Shane Murphy and he comes from the Tipster Street stable.

With a name like Shane Murphy, he couldn’t sound much more Irish so it seems appropriate that he is tipping on races in Ireland.

His record is superb and it is no wonder that Shane has built up quite a following in the Emerald Isle.

Having started tipping in 2014, Shane has made 318 points profit so far, a very decent total.

However, it was last year in 2016 that things really took off for Shane, with over 250 points profit made on the year.

It’s a service with a decent strike of 36%, so it shouldn’t be too painful to follow in terms of losing streaks.

We are looking forward to getting another of a tipster specialising in Irish racing underway after our successful trial of Classic Racing Gold last year.

There aren’t many Irish racing specialists around so would be good to another one to our portfolio, particularly as Classic Racing Gold has closed its doors to new members.

And the nice thing about Tipster Street services is that you can get your first month for a reduced fee, with this one offering the first 30 days for just £4.99.

So without further ado we will kick off the trial of Shane Murphy and will return with our first update in a couple of weeks.

In the meantime you can check out Shane Murphy’s Irish Tips here.

Terry Ramsden – A Tragedy of Rags to Riches to Rags