We have reached the end of our three month trial of Templegate Tips and here are the final results:

So we have completed our trial of “Britain’s No.1 Tipster.” Is Templegate deserving of that title following his efforts over the last three months?

Well not quite – with a total of 11 points lost over the trial, it has not exactly been award-winning stuff.

However, it has not been a disaster either and considering as a newspaper tipster he is forced to tip pretty much every day, they are certainly not the worst results in the world.

So we think a neutral rating is the fairest verdict for Templegate. 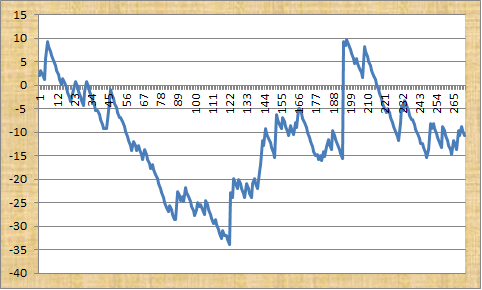 As you can see, things got off to a bad start but he managed to battle back and only finished slightly down in the end.

Ease of use: A relatively straightforward service to follow. Tips are normally posted well before racing on the Sun website and there are 3 tips per day on average, so the workload isn’t too great.

Availability of prices: There was a bit of a difference between the advised prices and Betfair SP results, with the former making 11 points loss but the latter made 39 points loss. However, there is not a stampede for prices in the same way as with other popular tipsters like Pricewise and Hugh Taylor, so you should be able to match the prices or get close to them.

Strike rate: The strike rate for the trial was 23%, so a little bit of patience will be required in following this service.

Advised Betting Bank: A betting bank is not advised for the service but we used a notional 100 point bank, which seemed more than adequate with a maximum drawdown of 34 points during the trial.

Subscription costs: The good thing is that the tips are provided free through the Sun website.

We started out this trial by saying we were sceptical of newspaper tipsters and that most of them make a loss in the long term.

However, Templegate seems to be one of the few exceptions to this rule and has apparently made over 200 points profit at a return on investment of 10% over the long run.

He didn’t quite manage to achieve those levels during our trial, but a loss of 11 points was no calamity either.

So we think a neutral verdict is a fair verdict for Mr Jones and we will keep an eye on things to see how he progresses.

Certainly if you going to the races and are looking for some newspaper tips to go on then you could do worse than using Templegate’s.

There has been a bit of return to form for Templegate – at advised prices at least – since our last update in February.

He has managed 13 points of profit at advised prices in that time, although at Betfair SP he has actually lost 3 points.

So that puts Templegate on -5 points overall at advised prices and -29 points at Betfair SP.

So quite a difference there between the advised prices and Betfair SP, but good to see things picking up for Mr Jones.

Back soon with our final review.

It has been a rough start to our trial of “Britain’s no.1 Tipster.” After three weeks, Steve Jones, aka Templegate of the Sun, is 18 points down at early prices and -26 points at Betfair SP.

As we said at the outset of the trial, we are normally very sceptical of newspaper tipsters, primarily because they are forced to tip every day and to have “winners” for their readers rather than selectively making tips to achieve long-term profits.

However, Mr Jones has apparently achieved long-term profits, so perhaps deserves some acclaim for that.

It hasn’t been an ideal start to the trial, but to be fair things have been tough lately with the weather and changeable conditions, so hopefully things will pick up for the remainder of the trial.

We will return soon with further updates.

One of the most famous names in horse racing tipping is Templegate – aka Steve Jones of the Sun.

Modestly calling himself “Britain’s No.1 Tipster,” Templegate provides tips each day in the Sun Newspaper, with Naps and then picks for each race on the day, as is normal for newspaper tipsters.

You would be forgiven for being sceptical about newspaper racing tipsters, who typically make a substantial loss over the long term. This is partly because they are forced to tip in every race and invariably just pick favourites so that they can talk about having “winners,” with their newspaper rarely tracking their overall profit and loss.

However, Templegate has actually proven quite adept at tipping, have apparently made over 200 points profit on his naps over the last couple of years.

We are always on the lookout for free tipsters who provide consistent profit, so with a strong record we thought it would be interesting to put Templegate under the microscope of a live trial here at Honest Betting Reviews.

We will also be intrigued to see how prices stand up and whether there is a stampede for his tips in the same way as there is for the likes of Pricewise and Hugh Taylor.

So with that in mind we kick of our live trial of Templegate’s tips and will report on progress soon.