We have come to the end of our trial of Hugh Taylor’s Tips and here are the final results:

*based on results at advised prices

This is quite a difficult one for us to give a final verdict on as although Hugh rallied late on to finish +9 points in profit by the end at advised prices, he finished -31 points down at the best prices available and -35 points down at Betfair SP.

Here is his progress during the trial in graph format: 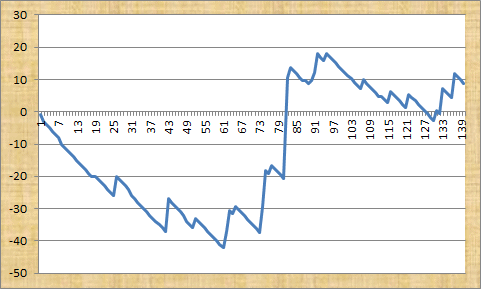 As you can see, quite a good recovery after an uncharacteristic poor run early on in the trial.

We felt in the end a neutral rating was a fair verdict – clearly Hugh is a great tipster with an almost unparalleled long-term record. But there is a problem – it is damn hard to make a profit out of his tips!

In fact, it made us wonder whether it is possible to make a profit at all from his tips.

Can You Make A Profit Following Hugh Taylor’s Tips?

Based on the results of our trial, we think the answer to that question is probably “no.”

Yes, it is true that we followed him at a particularly bad time, with him only making 9 points profit in 3 months, when you could normally expect him to make 50-70 points profit in that time based on his past results.

Even if he had made an additional 40 points profit over the course of the trial, that would only just have brought us into profit at the best prices available and Betfair SP – and that is presuming we could have got close to his advised prices, which clearly is virtually impossible.

We expect over the long-term you would probably just about break even or maybe eek out a slight profit if you were very on the ball and took the prices the very minute his tips are sent out.

But then you would face the age-old problem of bookies potentially limiting you as they are well aware of Hugh’s tips, with Mr Taylor being one of the best known of all tipsters in the Sport of Kings.

Is it best to just back the tips at Betfair SP?

One of the things we monitored closely during the trial was the difference between the best prices available and the Betfair SP. Here are how things averaged out over the course of the trial:

Somewhat perversely, although the Betfair SP average ended up higher than the best price available after the tips are sent out, Betfair SP actually finished with a worse total over the course of the trial.

This is probably because those horses that really aren’t fancied by the market can drift out quite a lot during the day to a high Betfair SP and these ones rarely go on to win.

Those that are fancied seem to often run well.

It seems you are best off taking the early prices, particularly as you can use Best Odds Guaranteed bookmakers to squeeze out some additional value.

Are there any profitable angles to his tips?

Well they most obvious angle would be to back the tips as soon as they are released and then lay them later when the price has reduced to lock in a guaranteed profit.

You might run the risk of account limits with the bookies if you did that, but it would be an option if you are quick on the draw.

Other than that, the only we could think of is only backing his tips when they are below around 5/1, as then the prices don’t tend to contract so much. Although that wouldn’t yield many bets per week so would be a limited strategy.

So unless you happen to know Hugh and could convince him to give you the tips a few minutes before they are sent out, we think the chances of making a profit from his tips are quite limited.

Hugh Taylor is undoubtedly one of the best tipsters around with a superb record over the last six years of over 1900 points profit at a return on investment of over 29%.

Sadly though it doesn’t seem profitable to follow his tips, unless you are incredibly fast at getting your bets on as soon as his tips are sent out.

However, even if you did that we expect the bookies would catch on pretty quick and you could have your accounts limited as you can be sure the bookies are aware of Hugh’s tips.

So unless Hugh considers a more selective service – perhaps paid and limited to a certain number of members – then it is probably one to leave alone unfortunately.

Oh dear! More pain for the followers of the normally magnificent Hugh Taylor, he of At the Races fame.

40 points down so far, perhaps Hugh’s worst run ever! Sod’s law I think they call it.

Anyway, how have the comparisons gone in terms of advised prices, available prices and Betfair SP?

So Betfair SP faring the worst so far. But then when we have a look at the average prices of all the selections, including winners and losers, we get a slightly different picture:

So, that then begs the question – is it the case that the selections that are continually backed in all day and go off a lower BSP than the price available after the tips are given out go on to run well?

Do we get some sort of glimpse into the future, a bit like a poor man’s Biff from Back to the Future II???

Probably not, but it opens up another area of investigation anyway, so we will now be including the horses’ finishing positions to try and get a better sense of things.

In the meantime, let’s hope Hugh picks up his game and gets back to his usual mesmerising form.

We seem to have hit Hugh Taylor at a bad time, with all losers so far since we started our trial. Sods law I think they call it!

So that’s 22 points down so far, although he has had a couple of close shaves including one that was beaten just a nose, so things could be quite a bit better if that had come in.

One of the main reasons for doing the review wasn’t just to collect the results however – Hugh’s record over a long period has been outstanding and it is not really open to question whether he is a good tipster – but rather to establish how obtainable prices are and whether you can make a profit following his tips.

To try and answer that question we have been recording the advised prices, the prices we have been able to obtain after the tips are posted and the Betfair SPs.

So what have our findings been so far?

Firstly we would say that the prices are extremely difficult to obtain. The tips aren’t available by e-mail so you have to go to the site to see the tips. They aren’t given out at the same time every day so you have to be quite watchful.

Then when tips are given out, the prices crash immediately. Within a minute or two of the tips being given out the prices have been smashed in.

What is interesting however is that the Betfair SPs have generally been beating the prices we have been able to obtain, by quite a margin.

So far, the averages of the tips have been:

So as you can see, quite a difference between the prices obtained and Betfair SPs.

Of the 21 bets advised so far, 17 have had a higher Betfair SP than price we have been able to obtain, where as only 4 have been the other way round.

We will be back with more updates soon.

Today we are commencing a review of the very well-known tipster Hugh Taylor from At the Races.

Along with Pricewise at the Racing Post, Hugh is one of the most popular tipsters in the whole of horse racing and when you look at his record, it is not surprising.

Since he began tipping on the At the Races website in 2009, Hugh has made a staggering 1,897 points profit at a return on investment of 29%.

That equates to 283 points profit per year.

Amazing stuff – there are few in the industry who can even come close to matching those figures.

However, as anyone who has tried to follow Hugh’s tips will know, he has become something of a victim of his own success and is now so popular that prices will normally crash as soon as his tips are posted on the website.

The bookies run scared of the great man and you can see why – imagine hundreds, maybe thousands of people all piling on tips that are as good as his at the same time. That’s going to turn your book pretty lop-sided!

Can you actually make a profit following his tips?

The real question with Mr Taylor is whether you can actually make a profit following his tips.

The great thing is that the tips are free, so if you could manage to make a profit, then with Hugh’s level of consistency you could really build up a tidy bank.

Surely with a guy who is making 283 points profit a year there is leeway to take lower prices and still make a profit?

Well the aim of our trial is to find out.

We will record results at advised prices, Betfair SP and then the best odds we are able to obtain after the tips have been posted on the website.

Think this will be a case of fastest finger first! Anyone following the tips has to be quick off the mark we would imagine.

Anyway, this should be an interesting trial and a bit of a departure from our usual reviews.

We will return soon with our first update.

The Sports Guru – Final Review
Scroll to top
We use cookies to ensure that we give you the best experience on our website. By continuing we assume you accept the use of cookies. AcceptPrivacy Policy