We have reached the end of our three month trial of Racing Wins and here are the final results:-

The service was unveiled a few months ago to quite a bit of fanfare so we were eager to check it out and see if it could live up to the hype of the launch.

So we subjected to a live three month trial here on the site, recording all selections to both advised prices and Betfair SP.

After three months then, how has Racing Wins got on? Has it lived up to the hype of the launch?

Well if you’ve seen the results above then you will know it has ended up somewhat disappointing us, with a loss of 21 points being made to advised prices and a 25 point loss at Betfair SP.

As you can see from the graph below, things were going ok for most of the trial but tailed off badly towards the end. 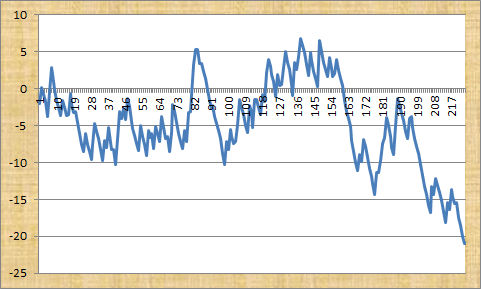 The return on investment was -7%, so not too great either unfortunately.

Overall then Racing Wins was somewhere between a failed and a neutral rating, but given it certainly wasn’t a washout by any means, we will err on the side of caution of plump for a NEUTRAL rating.

Hopefully they can turn things around and move into profit in the coming months, so we will keep an eye on things and see if they can manage to do that.

Ease of use:  Tips are normally sent out in the morning between 9 and 10 am. There are four tips per day when there are some tips, although some days there are no tips. Overall a fairly straightforward service to follow.

Availability of prices:  There was no problem at all getting the advised prices and little difference between them and the BSP results.

Strike rate: The strike rate for the trial was a solid 29%.

Advised Betting Bank: No betting back is advised for following the service, but we used a 100 point bank for the trial.

Racing Wins was released a few months ago to a good deal of interest from the betting community in what looked on paper like a very promising tipster.

As is so often the case though, the results in a live trial haven’t lived up to the pre-trial billing and we have ended up 21 points down after three months.

Whilst that’s not the end of the world, we were hoping for more so can only award this a NEUTRAL rating for the time being.

We will keep an eye on things for the time being and see if results improve over the coming months.

A reversal of fortunes for horse racing tipster Racing Wins since our last update a few weeks ago.

They have dropped 11 points in that time to advised prices, meaning they are now 10 points down for the trial overall at advised prices.

At Betfair SP it is a fairly similar picture, with 14 points dropped since our last update to put them 12 points down for the trial overall.

Just a few weeks left in the trial here, so we will need to see some really good results in that time for this to achieve a passed rating.

A move back in the right direction for horse racing tipster Racing Wins since our last update three weeks ago.

They have added 8 points of profit in that time to advised prices, meaning they are now 1 point up for the trial overall.

At Betfair SP it has been pretty similar, with 10 points won since our last update putting them on 2 points up for the trial overall.

Good to see the positive momentum, let’s hope it continues for Racing Wins.

It’s not been a great start to our trial of Racing Wins, a new horse racing tipster service.

After just under a month of following the tips, we are 7 points down at advised prices.

At Betfair SP it has been a similar story, with 8 points lost so far.

Still, it’s early days and we are only a little down, so things could easily turn around quickly and get back on track.

This a new service and one which we have been asked to proof as part of their venture out into the tipping world.

The results prior to the official commencement of the service look promising, with four profitable months out of four and 164 points profit made.

In terms of the strike rate, that is pretty good too at over 33%, so it should be a reasonably sensible service to follow.

There are four different tip types as part of Racing Wins, including the Nap (i.e. best bet of the day), Next Best, Third Best & Outsider Bet.

Interestingly from the results published to date, the Third Best and Outsider have produced the most profit. Although perhaps that isn’t such a surprise when you consider that

The tips are provided by a guy called Pete Thomson and he tips five days per week, i.e. taking Sundays and Mondays off – when the racing doesn’t tend to be much good anyway.

Subscriptions are very reasonably priced at just £14.95 per month or £67 per year, which if the live results match the pre-launch ones would represent excellent value.

Now just a quick note that Racing Wins doesn’t officially start until Monday 19th June – which as luck would have it is the start of Royal Ascot – but you can get your name down before then to make sure you get a place as this is the kind of thing that may sell out.

Anyway, we are looking forward to testing this out and will get going with proofing the results as soon as the service commences on 19th June.

In the meantime you can check out Racing Wins here.

Get Tips from the Master for FREE!
Scroll to top