We have reached the end of our three month trial of Premier Football Investments and here are the final results:-

It was recommended to us by John Baker of Banker Bets, one of the top football tipsters we have reviewed here on the site and someone whose opinion we trust.

It is quite a simple service to follow, with an average of around two tips per day. Many of the tips are Asian handicap bets and come in a variety of European leagues.

The results coming into our trial looked very impressive, with the bank more than doubled in four months.

In the trial itself, unfortunately results were not quite as good, with 2 points profit made over the three months we followed the tips.

That is certainly no disaster and any profit is a profit – and most welcome.

However, at the same time it is not quite enough for us to give this a recommended rating, so a NEUTRAL verdict seems the only fair decision here.

Here you can see the results in graph format: 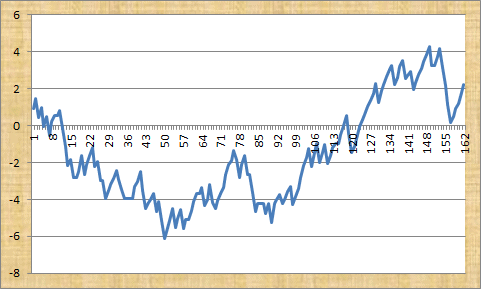 The results were really affected by a particularly bad week in December between Christmas and New Year, which accounted for 80% of December’s losses.

If it hadn’t been for that, results would have been very good and they did well to fight back into profit.

But there we are, that is how things went unfortunately.

We do think there is potentially something here though and have agreed to continuing monitoring the tips for a few months to see how things progress. We are hopeful this will turn into a long-term profitable service and one to add to the portfolio.

Ease of use:  A very simple service to follow, with just two bets per day and shouldn’t be more than a few minutes each day to get the bets placed.

Availability of prices:  The recommended prices were generally freely available and we often found we could actually beat them by using Betfair.

Strike rate: The strike rate for the trial was 70%, which is good and means there is the potential to build a bank fairly quickly, as seen in the four months prior to our trial.

Advised Betting Bank: A 20 point bank is recommended for following the service. With a +70% strike rate, this seems adequate to us.

Premier Football Investments looks like a promising service to us and it was a shame they had a nightmare week in December, because otherwise the results from the trial were most commendable.

With a profit of 2 points over the trial and 10% growth of the bank, we feel that a neutral rating is fair in this instance.

We will continue to monitor results for the next few months as we do think this has the potential to become a worthy addition to the portfolio.

It’s a simple service to follow and you can see Carlo who runs the service really knows his stuff and puts a lot of time into making the selections.

Hopefully that will be borne out by the results in the long term.

Premier Football Investments has continued its good form, adding another two points of profit since our last update.

That means they are now 3 points up for the trial overall.

It has been a good comeback from them because we were 6 points down at one stage, so they have battled back from a rough start.

Let’s hope for more of the same over the remainder of the trial.

It has been a good run over the last couple of weeks for Premier Football Investments, who have added five points of profit since our last update.

That now takes them into profit for the trial overall, albeit just one point up.

We have just over one month left in our trial, so let’s hope the recent form continues and they push on with banking some more profits.

A small improvement for Premier Football Investments since our last update a month ago. They have added 2 points of profit since then, taking them to 4 points down overall.

With the winter breaks for most of European leagues, the bets have been a little lighter lately, but things will pick up once the fixture list gets going again.

Let’s hope that leads to things picking up for Premier Football Investments and moving into profit.

A tough start to our trial of Premier Football Investments, with 6 points lost so far since we started following the tips at the beginning of December.

Most of the bets are in the Asian Handicap market, although of course you can often create these bets using other markets such as Draw No Bet or by laying.

Hopefully the rough start is just a blip and we will get back on track very soon.

In the meantime, you can check out our guide on how to win your football bets here.

We are always on the lookout for new football tipping talent here at Honest Betting Reviews and today we were contacted about a very interesting-looking new tipster.

The e-mail we received was from John Baker of Banker Bets fame, one of the top football tipsters we have reviewed here at the site. We always take note of  anything John says as he one of few honest and transparent figures in the tipping and betting systems business.

So we were particularly intrigued by this new football betting specialist John brought to our attention. This specialist’s name is Carlo and he is a full-time betting professional based in Rome.

Carlo has apparently been sending John his bets for about a year now, and after seeing both his first-rate knowledge of betting markets and excellent results over over a prolonged period, John agreed to enter into a partnership with him on a new betting service featuring his tips.

So back in August they narrowed it down to what would be most effective and convenient for a public service, with bets sent out once per day by email.

Since this was all finalized results have been outstanding with more than 27 points profit from a 20 point starting bank (136% capital growth) in the first three and a half months.

That is superb stuff and if repeated over long term would mean we have found something very special here.

What we think is even more exciting about the results having examined the spreadsheet is the strike rate for the bets so far, which stands at 65%.

That means a good majority of the bets so far have been winners, which is a great from a punters’ point of view because it means you can stake a reasonably high levels. Plus psychologically it is easier if you are not having to contend with long losing streaks all the time.

The service is called Premier Football Investments and you can check it out here.

Most of the bets are in the main European leagues and the majority of tips come from alternative asian-handicap markets that not all bookmakers offer, which means you will probably need access to one or more of the following bookies to get the most out of the service: Betfair, Bet365, Unibet, 1xBet, Pinnacle, SBOBET or a third party bet broker such as AsianConnect or Samvo.

The great thing is that you can get a two month FREE trial starting on 1st December, which is a fantastic way of checking out the tips and seeing how they get on before committing to a paid subscription.

We will be commencing a three month live trial here on the site, so you can also follow the results on this page.

We will be back soon with our first results update on how things are getting on.

In the meantime, you can get your FREE trial of Premier Football Investments here.

What is a Double Chance Bet?

Alan Brazil – Footballer, Commentator, Bon Viveur Extraordinaire
Scroll to top
We use cookies to ensure that we give you the best experience on our website. By continuing we assume you accept the use of cookies. AcceptPrivacy Policy