We have reached the end of our three month trial of Football Advisor and here are the final results:

Football Advisor is a football tipster that has been running since 2014 and who has established an enviable reputation in that time.

Since starting up, they have amassed over 350 points of profit at a strike rate of over 35%.

So how did they get on during our trial?

Well, results were solid rather than spectacular, with 8 points profit being accumulated over our three month trial.

Here is how things went in graph format: 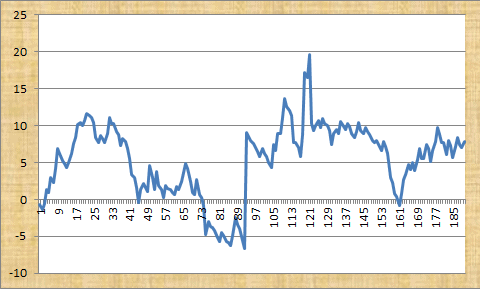 As you can see, a bit of a rollercoaster over the trial but a nice profit in the end.

There are a good volume of bets, with nearly 200 bets being advised over the trial, even though it was conducted largely over the Summer.

Tips are sent out by e-mail and are sent with plenty of time before matches, often the day before.

Here is an example of an e-mail:

The Sam Allardyce era gets underway today in earnest as England play away against Slovakia on Sunday. This will also be England’s first game since that humiliating defeat to Iceland at the Euro’s.

Hodgson, Capello, McLaren, Eriksson, Keegan, Hoddle, El Tel and even Graham Taylor all won their first game. In fact, you have to go all the way back to Bobby Robson before we find an England Manager who did not win their first game – a 2v2 draw against Denmark.

The only England manager to lose their first game was Sir Alf Ramsey – And that didn’t work out to bad in the end did it. So perhaps a defeat for Big Sam, will be a positive sign after all.

England & Big Sam to start with a win.

It is good to see some analysis with the tips and the logic behind the bets being made. You do worry sometimes whether some tipsters are just sticking a pin in a piece of a paper to pick their tips!

Anyway, we feel that the profit made during the trial wasn’t quite enough to warrant a recommended rating for Football Advisor.

Betting at £10 per point would have made you £80 profit over the trial, but then with subscription costs of £97 per month or £197 per quarter, that wouldn’t have covered the fees.

So we think a neutral rating is the fairest verdict at this stage.

However, with an impressive long-term record and considering our trial was run mainly over the Summer, we think it is worth keeping an eye on Football Advisor to see how they progress over the coming months.

Ease of use: As mentioned above, tips are normally sent out in good time before matches, so plenty of time to get your bets on. Although there are two bets per day on average, it is more a case of some days with no bets and then others (normally weekends) with 5 or 6.

Availability of prices: The prices were generally very much available and in some instances by using the exchanges you could even beat the advised prices.

Strike rate: The strike rate for the trial was 34%, which is a little below the long-term average of 38% and probably explains why results weren’t quite as good as previously.

Advised Betting Bank: No betting bank was advised, but we used a 100 point bank for the trial, which should be enough to cover losing runs.

So coming into the trial of Football Advisor, we were quite hopeful of finally having found a quality and honest football tipping service.

We are not disappointed by the results by any means and a profit is a profit.

However, given the high subscription costs of £97 per month or £197 per quarter, you would need to have bet at around £50 – £100 per point to really make this worthwhile.

Now there may be some of you out there who can bet at those stakes, but for the majority staking of £10 – £20 per point would be more realistic.

So we feel a neutral verdict is reasonable at this stage and we will keep an eye on things for a while to see how things develop for Football Advisor.

Footy tipster Football Advisor has been on a strong run since our last update, adding over 13 points of profit to stand at 11 points up for the trial as a whole.

They had a nice winner predicting Portugal to win the Euros, which to be fair not many people did.

After the Euros they took a well-earned break for a couple of weeks but are back in action now with the tips flowing again.

Lots to like about Football Advisor and strong results to date.

It has been a fairly even start so far for Football Advisor, with 2.5 points lost for the trial after three weeks.

Just to recap, Football Advisor is a football tipster that provides tips by e-mail for major football leagues and tournaments.

It has been a busy time for them with the Euros and Copa America going on. After three weeks we have already had 90 bets, which is quite high for a football service.

Things had started off very strongly in June, but have just tailed off slightly with some of the topsy-turvy results in the Euros.

Anyway, not much lost so far and plenty of time for things to pick up.

Our long search for a winning football tipster finally found some success recently in the form of Thomo’s Tips, who managed a very profitable trial here on the site and have continued to do well since our trial ended.

Not resting on our laurels however, we are always on the lookout for new football tipsters of promise.

One that we have been hearing a fair bit about on the grapevine is Football Advisor, a very impressive and professional-looking football tipping website that has been around since 2014.

They tip mainly in the big European leagues and international tournaments and matches, although there are a few bets in some of the minor leagues as well.

Football Advisor’s record since they started just before the 2014 World Cup is pretty outstanding for a football tipster, with just under 350 points profit having been accumulated.

Those profits have been achieved at a return on investment of 26% and a strike rate of 38%, both very strong metrics.

With results like these, the service is understandably one of the more pricey ones around, with subscriptions costing £97/month, £197/quarter or £388 for 6 months.

However, if they can maintain the kind of results achieved to date then those subscription costs would be well worth it, presuming of course you can bet at reasonable stakes.

Although the end of May isn’t normally the best time to start a trial of a football tipster, we do have the Euros just around the corner which will be a veritable feast of betting, plus the Copa America and of course the Summer leagues.

So plenty of action to get our teeth into and we understand Football Advisor will be betting in all of it.

Without further ado then we will get our trial underway and let’s see if we can add a second service to our list of winning football tipsters.

You can check out Football Advisor here.