We have been following the popular sports betting service Banker Bets for 18 months now, a very good period over which to judge a service.

They initially received a strong recommended rating from us after our initial trial that ended in April 2015.

Then when we updated things in October 2015, they maintained that recommended rating, whilst having dropped down slightly from the heady heights of the original trial.

So now, a further 9 months on and after 18 months in total of receiving the tips, where do we stand with Banker Bets?

Well, we are pleased to say that things have continued in positive fashion for Banker Bets.

Here are the monthly results since our last update in October 2015:

So over 50 points profit since last October takes the total for Banker Bets to 126 points up overall after 18 months.

How many high street banks would give you 117% interest over the space of just over six months!

Not many I would wager.

Taking results from 2014 before our review started (which obviously we can’t verify, but we have no reason to doubt as all the results we have received for 18 months have been fully accurate and John who runs the service has always been completely honest) the total profit stands at 268%.

That’s using level staking – if you had used 10% compounding no doubt the profits would have been considerably more.

Add to that the fact that they have managed an exceptionally high strike rate of 81% and you have a system that will deliver you a very high number of winners, with minimal losing streaks.

In fact, they haven’t had 2 losing bets in a row since April!

So overall after 18 months of following Banker Bets we are very happy to continue to give the service a recommended rating.

The key to a successful tipping service is standing the test of time and not just having a good run for a few months and then imploding, which so many services seem to do.

Banker Bets has been consistently profitable over a sustained period and has proved its worth over the long term, amassing 126% profit over the period we have been following it.

Add to that an exceptional strike rate of over 81% and the fact that you can often beat the advised odds by using the exchanges and you have a highly impressive package overall.

Definitely worth signing up to and seeing your bank grow steadily over time.

We now have nine months of results for Banker Bets so we thought a good time for an update on how they have been getting on since our trial ended in April.

Here are their monthly results totals from 6th April (when our trial concluded) onward:

So things have been disappointing since the trial ended to be fair with a loss of 23 points incurred.

That comes after they made 95 points profit during our trial, so in total after 9 months they are 72 points up.

Using the advised bank, that equates to 72% bank growth in nine months.

Whilst that it is still a good total for a service that tips at very low odds and manages a strike rate of over 80%, it is probably a bit too low for the service to continue warranting a 5 star rating.

To compare it to our top rated service, Master Racing Tipster, that one has managed 350% bank growth in just over six months.

And certainly for any members who have joined since our trial ended, a loss over a six month period will have been disappointing.

However, we believe you need to take a long-term approach to betting and in fairness they have made a good profit over the nine months, which is impressive in sports like football and tennis where winning tipsters are as scarce as hen’s teeth.

Equally, their published results prior to our trial show good profits as well. Now although we can’t verify those results as we weren’t subscribed to the service at that time, we have no reason to doubt them as the results match exactly the selections given out in the emails since we have been members.

Things have been a little disappointing for Banker Bets since our trial ended and they have failed to reach the heights achieved during that period.

But at the same time, they are still in profit for the nine months we have been following them, having grown the bank over 70% in that time, which is good when tipping at odds-on and in notoriously difficult sports markets.

So overall we think they still deserve a passed rating but a downgrade to 4 stars.

95% profit banked during our trial!

You can get Banker Bets here

Here are the final results for our three month trial of Banker Bets:

You can view the full results here

It’s been an excellent trial for Banker Bets and it’s great to see a service living up to its previous results.

This is a service that primarily provides win bets on football and tennis, with the occasional bet on American football.

Matters took a bit of a turn for the worse in mid February with a bizarre run of results, including Nadal losing his first clay court semi-final in donkeys years, Chelsea failing to beat Burnley at home and Juventus unable to overcome lowly Cesena.

Since then things have very much got back on track though with a good run of 12 straight wins to finish the trial.

So we concluded with the bank very nearly doubling in 3 months, which is really fantastic stuff.

Here is a graph of the results during the trial: 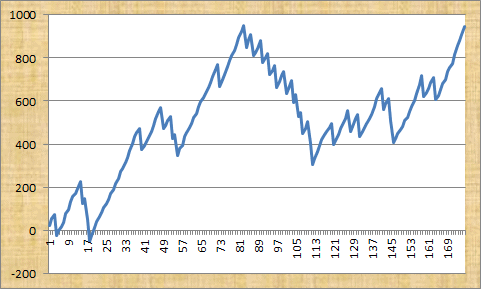 As you can see, a nice trend upwards then the difficult period in February, followed by a good run at the end to just about double the bank overall.

Ease of use: Very good – bets are given out early in the morning (UK time) and can be placed at the bookmakers or Betfair. Bets take just a couple of minutes a day to place.

Availability of prices: Good. Overall I was able to match the advised prices using just Betfair. Sometimes I beat the advised price and sometimes it was worse, but overall things evened themselves out.

Strike rate: The strike rate for the trial was very high at 84% and with a long term strike rate of 85% losing runs should be short.

Advised Betting Bank: A 10 point betting bank is advised, or a compounding approach where you stake 10% of your current bank on each bet. With an 85% long-term strike rate this should be sufficient, although to be ultra safe you might want to try a 15 point bank.

I really like services that can deliver a high strike rate and this is one that certainly does that, with an 84% strike rate achieved during out trial. It really does lower the stress levels when the vast majority of your bets are winning. 🙂

However, the most important thing of course is the overall profit/loss level. Well Banker Bets has delivered in spades on that front as well.

It’s good that you get a clear reasoning behind the selections and you can see that John who runs the service really does his homework before he sends out each bet.

There does appear to be clear value in these types of bets and as we have seen during our trial, there is great potential to build a bank.

If we can repeat these results and double the bank every 3 months, I may be able to start contemplating retirement in a few years’ time! 🙂

Let’s hope so anyway, but in the meantime this one definitely goes on to the passed systems list and I can thoroughly recommend giving Banker Bets a go if you want to make some consistent profits.

How to Make 560% Profit with Banker Bets

Betting Syndicates – we’re all in this together