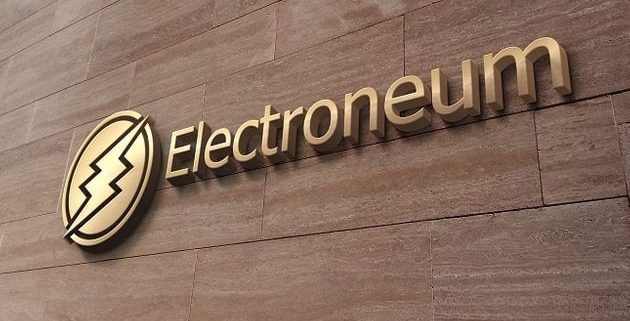 Electroneum is a new cryptocurrency (like Bitcoin) and it has been getting a lot of attention as it undertakes an ICO (Initial Coin Offering).

Some members have contacted us asking whether Electroneum is a scam.

Inevitably with the incredible recent successes of ICOs in raising money there have been a lot of people launching new coins wanting to grab a piece of the extremely lucrative pie.

A few of these ICOs therefore have been accused of being scams, with the people behind them allegedly creaming off investors’ funds for themselves. Hence why China has banned them and other countries are looking at regulating them.

However, taking a look at Electroneum, the people behind it, their White Paper and the publicity they have generated, we do not believe this is a scam but looks like a genuine business to us.

Let’s go through each of these in turn in our full in-depth review of Electroneum. 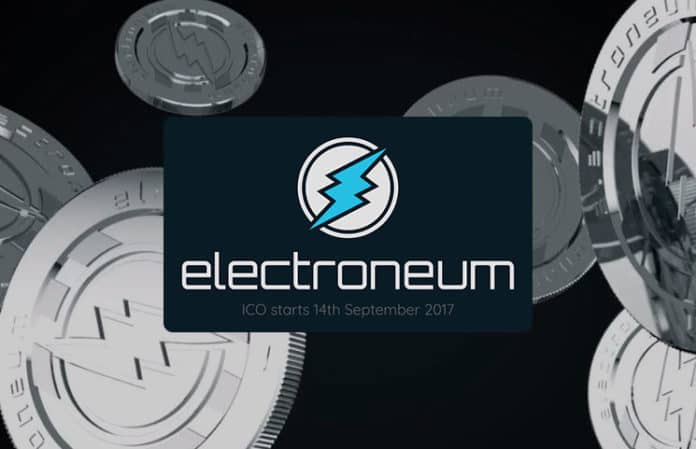 Electroneum will be the first mobile cryptocurrency that you can manage entirely from an app on your phone.

It will initially target the gaming market, so that you will be able to earn tokens while playing games.

But then as it expands, Electroneum aims to become the mobile cryptocurrency of choice, allowing people to buy goods, send money to friends or make international transactions at the touch of a smartphone button and without all the annoying bank charges.

But here’s the really clever bit: you will be able to mine it from your phone, meaning you can have it running in the background making you tokens while you sleep. These tokens could then be exchanged for other crytocurrencies or even pounds, euros and dollars.

So overall this looks like a very clever idea to us and its simplicity could be a real USP and mean there is a high level of adoption.

The White Paper is clearly set out, with a business plan and timetable going forward. From that point of view, Electroneum doesn’t look like a scam to us.

The People Behind Electroneum

Of critical importance when looking at whether a new coin is a scam or not is the background of the people behind it. Are they well-known, trustworthy, public figures? Do they have a record of success in business?

Let’s look at the people behind Electroneum and try to answer these questions:- 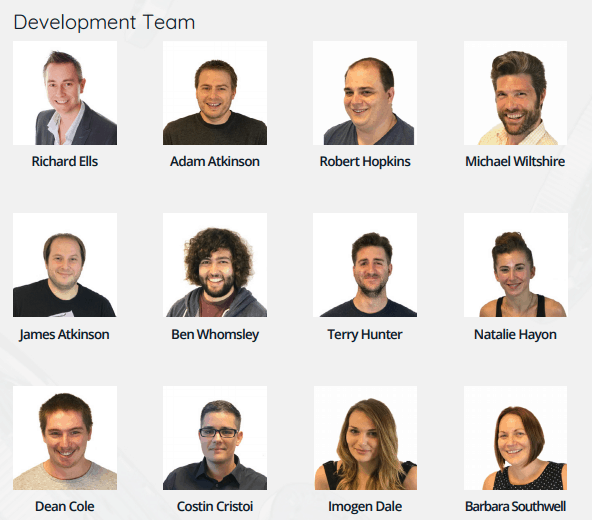 – Richard Ells, CEO – Electroneum is fronted by Richard Ells, a businessman and entrepreneur. Ells started a digital marketing agency more than 20 years ago that is still going strong and more recently founded Retortal, a platform used by global fortune 500 companies such as Herbalife and Avon.

– Mark Robinson, Advisor – over 20 years experience serving on the boards of companies listed on the London Stock Exchange, Mark is now Director at Flint Engineering Ltd and has won awards for his entrepreneurial work.

So a good main line-up there. Certainly Richard Ells is an established figure and his Retortal business is well-known and successful.

Ideally we would like to see a little more expertise here from diverse sectors such as finance, legal services and accounting to help guide the progress of Electroneum.

For example, another coin that recently had its ICO, LA Token, included on its team the founder of home loan marketplace Zalogo, the Former Chief Compliance Officer at China Construction Bank Corporation and the former CEO of MySpace – so an excellent range of skills at its disposal.

Perhaps the Electroneum team will be able to call upon advice and expertise in relevant sectors when they have raised all the funds from their ICO.

The rest of the Electroneum team is a little less-known, made up of various programmers, software developers, social media experts and marketers. That is not necessarily a bad thing, it is just that they are not public figures but are more the team behind the scenes working on making Electroneum a success.

Of more significance is the fact that Duncan Logan, CEO of Rocketspace, has publicly backed the project. Logan nurtured the likes of Uber, Spotify and Hootsuite and is a well-known investor, so his backing certainly adds weight.

He has stated via Twitter that this is the first ICO he is going to be involved in, out of the hundreds that have happened so far. 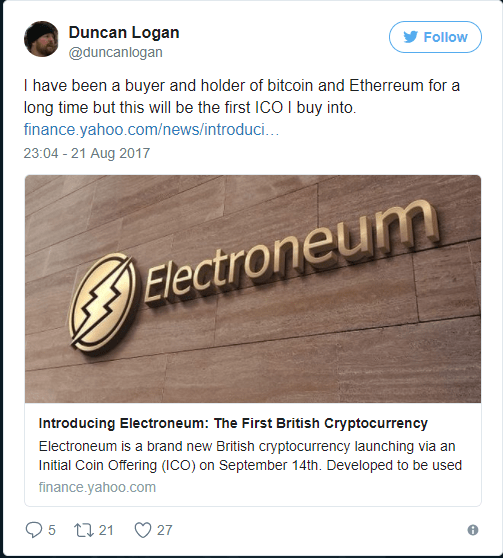 That is a significant statement to make, given that there have been some big ICOs to date, making millions of dollars for some lucky investors who backed them.

Duncan also invited Richard Ells to speak at an event he hosted, the Corporate Innovation Summit in London on 27th September:

That again suggests a genuine venture and we don’t think Duncan Logan would be getting involved with this if he thought it was a scam.

Overall then, it looks like Electroneum has a good team behind it and Richard Ells is a credible figure. Ideally we would like to see a little more diverse expertise across different sectors, but with the funds they are raising this is something they should be able to call upon quite easily.

A White Paper is a document that accompanies an ICO, setting out what a company intends to do with their coin. It is a little like a business plan.

You can view the Electroneum White Paper here.

In summary though, the White Paper sets out:-

There are some useful nuggets from the White Paper that we quite like. Here is their description of the app:

“We’ve developed a fully functioning crypto coin with some very unique features. We’ve identified multiple enormous markets and we’ve created a free Apple and Android app that allows us to start penetrating those markets from day one after the token sale (31st October 2017).”

It’s good to see that they’ve already got the app built and it will be ready to go as soon as the token sale closes.

We haven’t seen a working version of the app yet (i.e. an iPhone version – iOS) so would like to see that to be absolutely confident in the product. At this stage of the ICO though it isn’t unusual to not have the product launched yet. Normally funds are used to aid product development, so having the app already built and ready to go straight away is a good sign.

And on how it will work:-

“Installing the free Electroneum app (Apple or Android) immediately gives the user the ability to start gaining Electroneum in their wallet. All the time the app is live (even in background mode) it will be running the unique app based crypto mining experience, which requires ZERO technical knowledge. It takes up very little bandwidth, so doesn’t cost much to run on 3G or 4G data.”

That is also good, so no technical know-how needed and the app will take up very little bandwidth apparently.

Finally, there is confirmation that they have developed a payment system for Electroneum:

“Third party payment API (used to allow third parties to accept Electroneum or pay out Electroneum – this is critical to implementation with the Gaming Industry).”

Again, we are pleased to see that they have a third party payment API allowing other companies to process Electroneum, which will be vital for its take-up and viral usage.

Finally in terms of listing on the exchanges, we understand that Electroneum will be listed on the Cryptopia exchange when it launches and will then target the larger exchanges like Bittrex.

Overall then we like the White Paper and the plan going forward, they are clear and easy to understand, much like Electroneum itself actually.

Finally we like to look at the publicity an ICO is generating when judging whether it is genuine and its likely success or failure. Are they getting much publicity? Are they attending events, showing themselves in public and talking to the media?

If the answer to these questions is yes, then it’s a good sign that the project is genuine and has positive prospects.

So how have the Electroneum team been doing on this front?

Well, the good news is that Richard Ells has been doing a number of interviews.

Here is one from Finance Magnates that illustrates quite well what Electroneum is all about.

Plus Richard has done a number of interviews on YouTube. Here is one with Crypto Currently:

There are quite a few other interviews with Richard on YouTube as well.

Richard also spoke on a panel at the NEX exchange in Broadgate on 4th October, so he has been promoting Electroneum in person which is reassuring (click on the picture to hear him talk). 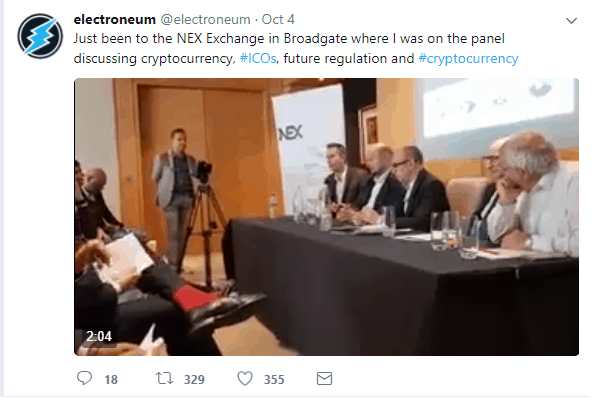 Electroneum has also been featured in the press, most notably:-

So a good level of publicity for Electroneum.

What is most impressive though is the participation the token sale has generated, with over 200,000 people having signed up with still over two weeks to go. It isn’t inconceivable it could reach close to half a million participants if current sign-up rates continue.

We believe that would be record participation for a token sale/ICO, which would be a very good sign for the potential viral take-up of the app.

Certainly social media is awash with excitement about Electroneum, with endless tweets and hashtags appearing on twitter.

Even former Spurs boss Harry Redknapp has backed it!

All this bodes very well for the future of Electroneum.

You can never be sure if a new cryptocurrency is a scam until the ICO is over, the product launches and hopefully the coin itself is listed on the exchanges like Bittrex and CEX.io.

ICOs at the moment are completely unregulated, so it would be much easier for the people behind it to run off with the funds than it would be say in an IPO on the stock exchange.

However, having looked at it in some considerable depth, we do not believe Electroneum is a scam. Here are the main reasons:-

Now at the same time, we haven’t seen a working version of the app which will obviously be very important.

As we say, we can’t be 100% certain it isn’t a scam, but from all our research it looks to be genuine and we can’t see any reason to think it is a scam.

We think Electroneum could do really well if the initial interest is any indication. Getting over 200,000 sign-ups already is quite amazing.

As ever though, please be aware that cryptocurrencies are very speculative investments and only invest money you can afford to lose, because in a worse case scenario you could lose everything.

Only time will tell of course, but we are happy enough this is genuine and hopeful enough it will be a success to have invested in it ourselves – and you can’t get much more of an endorsement than that we suppose!

You can check out Electroneum for yourself here.

Is Bitconnect a Scam?