Just a quick note to say we will be continuing to monitor Profit Pony for a few months to see results over the long term. So far the news is good with 50 points of profit accumulated to date in May.

We have reached the end of our three month trial of Profit Pony and here are the final results:

They call it the reviewer’s curse.

You find a tipster that has an amazing record. In this case over 900 points of profit and 17 winning months out of 18.

Then you start your trial. And things seem to go immediately wrong.

In our case we managed to hit their worst month ever, with February finishing 35 points down.

Things improved somewhat over the rest of the trial however, to finish with an 11 point loss at advised prices and -18 points at Betfair.

That is certainly no catastrophe and represents just an 11% reduction in the betting bank, so we think overall a neutral rating is a fair verdict for Profit Pony. 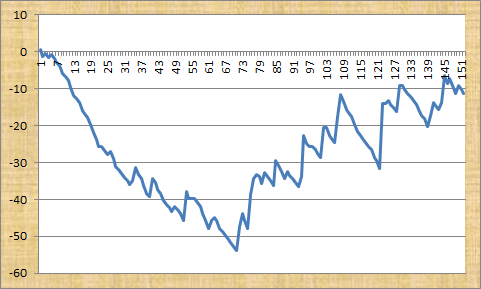 As you can see, things got off to a rough start but recovered well to almost finish level by the end of the trial.

We had expressed some concerns in our previous results update about some discrepancies between our results and those published on the Profit Pony website.

We have now received confirmation from them that the additional tip for the Irish Grand National which returned 41 points profit was a Twitter tip.

There is also a tip listed in their results on 16th April which returned 6 points and that appears to have been a Twitter tip as well.

It is fair enough if they want to include the Twitter tips in their results, presuming these are clearly marked as such.

As we said previously though, we hadn’t received any instructions to also follow their Twitter tips, so can’t include these in our results.

We think the service would benefit with some guidance upon signing up about how best to follow the tips and some information about the additional Twitter tips.

And we also think customer service could be improved somewhat as it took a good few weeks to hear back regarding our questions.

Ease of use: Tips are sent out at varying times, which can make things a little tricky. But there are on average just 1-2 tips per day, so the workload is low and should only take a few minutes a day to get the bets on.

Availability of prices: The prices were generally freely available, with the odd one or two being backed quite significantly. There wasn’t too much of a difference between the results at advised prices and Betfair SP, which is reassuring. Our advice would be to back the tips as soon as you can after they are sent out to maximise returns.

Strike rate: The strike rate for the trial was 23%, which is pretty good for the kind of profit they have been making. The winners come reasonably regularly which is positive.

Advised Betting Bank: There is no betting bank advised but we used a 100 point bank for the trial which we think would be sufficient, although a 150 point bank would certainly give you enough leeway.

It seems to have been a case of reviewer’s curse here with Profit Pony hitting their worst ever run as soon as we signed up.

The trial finished 11 points down in the end, which was only a small loss so we think a neutral rating is fair here.

We do think the service could benefit from some clear instructions after people sign up though as to what to do regarding their Twitter tips.

And an improvement in customer service would help things as well.

The long-term results are very good however and we wouldn’t want to write this service off purely on the basis of our trial. It seems worth following them for a little longer to see if the form previous to our trial can be recaptured.

It has continued to be a tricky time for Profit Pony, who are still struggling during our trial.

They are now 30 points down at advised prices after two months of following their tips and -22 points at Betfair SP.

That is a slight improvement on last time though, when they were 37 points down at advised prices.

However, perhaps of more concern to us is the discrepancy between our results and their recorded results on their website.

On 29th March, they have a tip recorded for Rogue Angel winning the Irish Grand National at 33/1, giving them a supposed 41.25 points profit according to their own results.

However, we have scoured our e-mails and cannot find any evidence of having received this tip.

On their website at the bottom it merely says “Some may have missed the Grand National tip so the profit for March for them would of been around +29pts.”

There is no explanation as to why some “may have missed this tip,” which is rather galling when you consider this makes a 41 point difference to the bank for the month.

We have e-mailed Profit Pony about this but are yet to receive a response. We have also e-mailed them about a couple of other issues during our trial and have had no reply to those questions either.

So customer service here seems very poor and is a major cause for concern.

In addition, that Irish Grand National tip is not the only discrepancy between our results and theirs.

There are a couple of other occasions where we did not receive any e-mail for tips recorded in their results.

It may be that they are including some of their Twitter tips, but if they are then this is a significant problem because we have no record of having been advised to follow both their e-mails and Twitter feed.

Even if we were, we would ask why that would be the case as most people would not have the additional time to follow Twitter waiting for a tip to be sent out. We would also ask why all tips could simply not be sent by e-mail anyway.

In addition, the tips are sent out at erratic times which makes it a little tricky to follow the service not having that consistency.

Overall then, unless we have some very distinct clarification on these issues and a major improvement in customer service, we would have to issue significant warnings about following Profit Pony for the time being.

We will update things with our final review in a few weeks, when hopefully we will have things cleared up.

Well they call it the reviewer’s curse. You join a service that has an outstanding record. Over 900 points profit in 18 months for Profit Pony, with the worst month being a loss of just 19 points.

Then they hit their worst ever run.

Since I started proofing the tips on 25th January, they have lost 37 points at advised prices, with only two winners so far.

Things are a little better at Betfair SP, with the total standing at -29 points so far.

Maybe it is a curse, or just one of those strange coincidences. Who knows? But either way it is disappointing.

Hopefully this is just a minor blip and we will return to normality very soon.

We have come across a horse racing tipster that we are quite excited about.

It doesn’t happen very often, as we trawl through tipster websites across the internet and tend to find results that either aren’t very good at all or seem too good to be true (and nearly always are).

Well in this instance we have found one that is between those two extremes, whilst being towards the latter end of the scale, in that their results look excellent – but not so good that they are obviously made up.

Plus they apparently used to tip on twitter before they set up their website and had a loyal group of followers with a clear tipping history you could see on twitter.

The service in question is called Profit Pony and has a fairly clear and simple website where you can view their previous results.

And what results they are! Over 900 points profit since starting in July 2014, with 17 profitable months out of 18.

From what we can tell so far most of the tips are 1 point win or 1 point each way, so it is not like they use some crazy staking system to inflate results either.

The only losing month was April 2015 when they apparently had over 25 second place horses (out of 109), so sounds like they were very unlucky that month.

There isn’t a great deal of info given about how tips are selected, other than to say that they are a small team of dedicated punters.

Let’s hope I haven’t put the kibosh on them with the big build up and they can keep up their previous level of form for the duration of our trial and beyond.

Will be back soon with our first update on how Profit Pony get on.

In the meantime you can check out the service here.

Zenyatta – The Queen of Racing
Scroll to top