We have reached the end of our three month trial of Webetyouwin and here are the final results:-

Webetyouwin is a football tipping service which focuses mainly on the Asian Handicap markets.

It is run by a team of Swedish full time betting professionals with apparently decades of betting experience behind them.

How did they get on during our three month live trial though?

Unfortunately things have not gone to plan and we have ended up 10 points down to advised prices.

With a recommended betting bank of 50 points, that equates to a 20% loss of the bank.

Here is how the trial went in graph format: 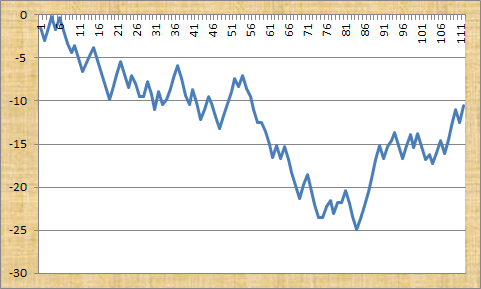 As you can see, we were down for just about the whole trial period, although thankfully there was a rally towards the end that improved things to a degree.

Overall though we feel Webetyouwin warrants a narrow FAILED rating. Whilst the results weren’t a catastrophe by any means, it is a very competitive marketplace out there and if you aren’t making a profit then punters will quickly go elsewhere.

Ease of use: It’s an easy service to follow with an average of just over one bet per day. They don’t end to bet on international matches though so that means a higher bet volume when the main leagues are operating.

Availability of prices: A positive aspect about the service is that they provide prices for both the best and second best bookie and quote their results in both, so you have a realistic expectation of results. We found the best prices were generally obtainable so this was not a problem.

Strike rate: The strike rate during the trial was 48%, which is somewhat below where it needed to be to generate a profit at the prices tipped at.

Advised Betting Bank: A 50 point bank is advised for following the service and that seems more than enough to us given the staking levels of 1.5 points per bet on average and the strike rate.

With a loss of 10 points made during our trial, unfortunately it is a FAILED rating for Webetyouwin.

Although a loss of 20% of the bank is certainly not the worst result we have seen in a trial, it is still a loss so those punters following the service will probably feel somewhat disappointed at this stage.

However, there was a small rally towards the end of the trial so hopefully that is a sign of better things to come and we will keep an eye on things to see whether that proves to be the case.

It continues to be a tricky time for football tipsters Webetyouwin, who have dropped a further 6 points since our last update at the end of August.

That means they are now 13 points down for the trial overall.

Bets are spread around the main European leagues including Serie A, the Bundesliga, Premier League and others, so we are talking big markets here and no problem getting the advised prices generally.

Hopefully we will have more positive news to report by the time of our next update.

A bit of a tough start to our trial of Webetyouwin, a football tipster specialising in European football, mainly Serie A, the EPL and Spanish La Liga.

So far after two weeks we are 7 points down.

It is very early days with just 25 bets so far, so too early to make much comment. All of the bets given to date have been in the Asian Handicap market, which is becoming increasingly popular these days.

With the football season just around the corner our new trials of footy services are coming thick and fast now.

The latest one we have for you is a service called Webetyouwin which focuses on the main European leagues, particularly Serie A and the Premier League.

It is run by a group of full-time, professional sport bettors based in Sweden. They are apparently passionate about football and about making money, bringing decades of experience to this new service.

The selections are apparently very carefully chosen with a large amount of research going into each one. This means it is a selective service rather than high volume, with around 25-30 bets per month.

Looking at the results so far, they started out in January this year and so far are over 25 points up, which to a 50 point bank amounts to bank growth of over 50%.

The return on investment so far is a very respectable 10%, which seems like the kind of level that could be sustained in the long run. Five out of six months so far have been profitable which is good.

Most of the bets so far are Asian Handicap, which some of you may not be familiar with but is actually fairly simple to operate.

We will run our normal three month trial and will update results here periodically during the review.

In the meantime you can check out Webetyouwin here.