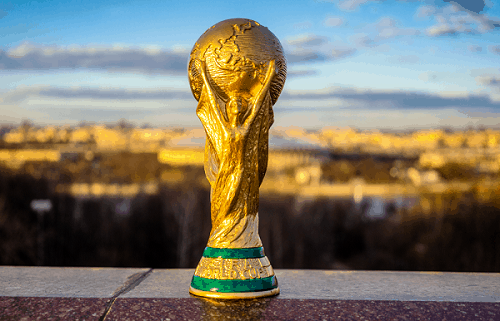 The 2018 FIFA World Cup is underway with the first round of group games having just been completed. It is the 21st FIFA World Cup, and it is the eleventh final tournament held on the European soil.

So far, eight nations from two continents, Europe and South America, have managed to lift the most prestigious international football title on the planet, with Italy being the only previous World Cup winner that failed to secure their place in Russia.

In addition to the defending champions Germany, three more European-based former world champions including France, England, and Spain qualified for the final competition, as well as, all three South American teams, Brazil, Argentina, and Uruguay.

All of the above-mentioned nations are widely recognized as principal candidates to win the 2018 FIFA World Cup alongside the likes of Belgium, and the current European champions, Portugal. However, considering the overall performance provided by a vast majority of these teams over the last year or so, Spain, France, Brazil, and Germany, are those who seem to have the most chances to return home with the prominent trophy in their hands.

The Selecao is the only nation in the history of the World Cup to feature in all the final tournaments, and they are always considered among the top favorites to win the prominent trophy. After Tite took charge of the national team, replacing Dunga on the bench, Brazil have only lost one match in almost two years, as their only defeat dates back to 2017, when they have been defeated by the arch-rivals, Argentina. Looking at Brazil’s performance throughout the qualification process, and considering the fact they topped the CONMEBOL qualifying zone in spite of the fierce competition, only confirm, their intention to lift the sixth World Cup title.

Although Argentina suffered a lot throughout the qualification competition, barely managing to secure their seventeenth World Cup appearance, the Albiceleste are among the top teams in the tournament, and the 2014 FIFA World Cup runners-up will try to move one step further pursuing their first World Cup title since 1986.

Captained by one of the best players of all time, Lionel Messi, Argentina will have their say at the final tournament in Russia despite the lack of top-class defenders. One of the most devastating attacking departments at the final competition will have to be at their best if looking to wrap-up Argentina’s third World Cup title.

The 2010 FIFA World Cup winners have been dominating their qualifying group from the beginning to the very end. Led by the likes of Diego Costa, Andres Iniesta, Isco, and David Silva, the Red Fury have topped Group G in style, winning nine of ten matches with a stunning +33 goal difference, allowing their opponents to score barely three goals during the process.

Despite the fact, Spain lost the head coach, Julen Lopetegui, a few days before their opening match, the chemistry that exists between the players and game philosophy will hardly break in such a critical moment for Spanish football. The famous tiki-taka style of play is something that adorns this team for years, and with potential Spain possess within their respective ranks, everything should remain in place for the big tournament.

The World Cup title holders, Germany, are known as a competitive team that knows how to play big competitions, and with the experience and confidence they have, it’s not impossible they succeed to win the second consecutive World Cup title, something only Brazil and Italy managed to do in the past. Die Mannschaft have stormed through their respective qualifying group, winning all ten matches with a +39 goal difference, displaying some outstanding performance during the process.

Joachim Low, the same coach that brought Germany their first World Cup title since the reunification, will lead the team from the bench again, and although he decided not to include Leroy Sane in the list of travelers, those players that will play in Russia, have an extensive experience, and a lot of international football in their legs.

As one of the most anticipated sporting events this year, the 2018 FIFA World Cup will be closely followed by millions of fans across the world, and for those who would like to test their luck and bet on their favorite teams, coral betting offers exceptional odds and guarantees the ultimate complacency. Bookies can redeem new customer £20 free bet offer as they sign up for the first time. All the World Cup’s best bets can be found here. Although Asian and African national teams never managed to advance to the World Cup Final, this summer’s World Cup edition may emerge as the first ever to host a nation from the AFC or CAF continental confederation, especially with the appearance of Senegal and Egypt that both own immense potential within their respective ranks.

Winning on the Grass Courts this Season

Fantastic Eights – Final Review
Scroll to top
We use cookies to ensure that we give you the best experience on our website. By continuing we assume you accept the use of cookies. AcceptPrivacy Policy