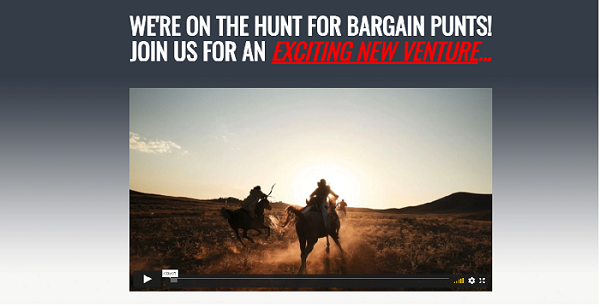 If you are a long-term follower of ours here you may well be familiar with Back Lucrative. It’s a long-running and highly respected horse racing service managed by a chap called Michael Carr.

Over the years we have reviewed their original Back Lucrative service, as well as their Flat Flyers and Hidden Winners services and have been impressed by the long-term results they have achieved.

Michael is not resting on his laurels however and has developed what looks like another very promising service, called Bargain Punter.

It has apparently generated over 211 points profit at level stakes over the course of 11 months, which is very good going.

Using a bank builder (or compounding) method, the performance improved to over 531 points which means over £10,620 at just £20/point.

Plus, by combining their selections as advised in multiple bets they claim it would have made an additional 803.81 points profit.

The theory behind it is to find “bargain punts” or value in other words, something Michael has clearly demonstrated he is an expert at over the years.

He reckons this is his most powerful strategy yet, which given the results he’s achieved is quite something.

Anyway, the proof is in the pudding as we always say so let’s wait to see how it performs under a live trial.

Just a note to say they are offering a 10 day trial of the service if you fancy checking it out.

We will run a review as normal and record results as we go along.

In the meantime you can check out Bargain Punter for yourself here.