We have reached the end of our three month trial of Bet Alchemist and here are the final results:

When people ask us what is the most important thing to look for in a betting system or tipster, we normally reply longevity.

Any tipster or system can do well over the course of a few months.

And only the very best can sustain profit-making over 5 years or longer.

Horse racing tipster Bet Alchemist is one of those who has done this and really stood the test of time.

Since starting tipping in 2011, they have made over 750 points profit, with an average staking of 1 point per selection.

With an average of 8 profitable months per year, you are talking very consistent tipping here.

These are very impressive results over a long period of time and we are pleased to say that they have lived up to that record during our trial.

With a profit of 38 points achieved at a return on investment of 26%, this is very much what we were expecting from Bet Alchemist.

Here is a look at the profit graph for the trial: 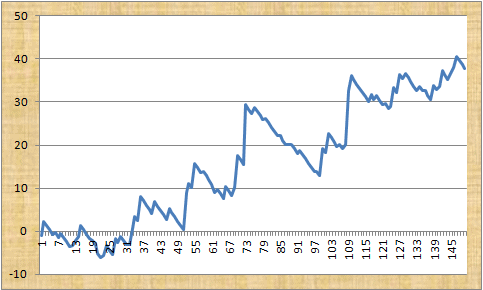 Other than a bit of a dip half way through, it was fairly steady upward growth and finished well up in the end.

So it doesn’t look like Bet Alchemist is viable to follow at Betfair SP and this is a service for those with bookie accounts still available to them.

Ease of use: Tips are sent out normally the evening before racing or in the morning, so plenty of time to get bets on. With an average of just over 1.5 bets per day, there is not a huge amount of work involved in following the service.

Availability of prices: Prices do tend to get smashed in by the time of the race – hence the much lower results at Betfair SP – so you need to get your bets on quickly. Prices are quoted from a variety of bookies and are normally available for a short while after tips are posted, so it is just a case of moving as quickly as possible and certainly within an hour or so if you can.

Strike rate: The strike rate for the trial was 33% (including placed horses), so pretty respectable stuff and returns will be frequent enough.

Advised Betting Bank: No betting bank was advised, but we used a 100 point bank for the trial and it was never in jeopardy during the trial. There was a 60-point drawdown in 2015 though, so you might want a 150 point bank to be really safe.

Bet Alchemist has shown itself to be a very consistent performer over a long period of time – with over 750 points of profit made in 5 years of tipping.

And that consistency was demonstrated during our trial as well, with 38 points of profit racked up to 1 point stakes and with a return on investment of 26%.

The only minus point is that it doesn’t seem practical to follow the service at Betfair SP, so this is probably one for those who still have some bookie accounts available to them.

As long as you fit that bill, then Bet Alchemist comes highly recommended and should definitely be added to any betting portfolio.

Things have been moving along nicely for Bet Alchemist since our last update a month ago.

They have added another 13 points of profit at advised prices, bringing them to 20 points up for the trial overall.

That is with staking of generally 0.5pts e/w, so is probably actually better than it sounds when you consider most tipsters use higher staking than that.

At Betfair SP however, things have been moving more slowly, with 5 points actually lost since our last update, meaning they are 3 points down at Betfair SP for the trial.

Prices are fairly obtainable and they quote odds from a number of different bookies when giving out the tips, not just the single best one.

So you should be able to get close to matching the results at advised prices as long as you have a few bookies account open.

At Betfair SP though, the jury is out at the moment.

It has been a solid start to our trial of Bet Alchemist, a horse racing tipster of longstanding repute.

Most stakes are o.5pts e/w, so very sensible staking and it means 7 points up so far is pretty good with such low stakes.

To get the bets you need to login to the secure area, which is quite unusual these days when most tips are sent by e-mail or text.

But we like what we have seen so far and Bet Alchemist is living up to the strong reputation they have established over a good number of years.

Alchemy – the process of turning base metals into gold.

In betting terms, that probably means just making a long-term profit – which for the vast majority of punters and even most tipsters is seemingly just as difficult as creating gold from metal.

The latest horse racing tipster we are about to trial here at Honest Betting Reviews has been able to do just that over the last 4 years though, racking up close to 700 points in profit in that time.

So perhaps the title of Bet Alchemist is richly deserved in this case.

Their impressive profit totals have been achieved with an average stake of just 1 point – so no mad staking system used to inflate results like some tipsters are known to have done.

There are apparently 6-8 bets per week, so a reasonably selective approach is taken to betting.

On average they have managed 8 profitable months out of 12 per year, which is a very decent level of consistency.

The average odds of the tips is 12/1, so we are talking about needing a degree of patience to follow the Bet Alchemist. But with results like theirs, it sounds like that kind of patience has been richly rewarded.

So far in 2016 they are apparently 91 points in profit, so seems like a good time to join them.

Anyway, without further ado we will get the trial underway and hopefully see some decent returns over the next three months.

We will be back soon with our first update on how things are going.

In the meantime, you can check out Bet Alchemist here.

Betfair Renegade – Final Review
Scroll to top
We use cookies to ensure that we give you the best experience on our website. By continuing we assume you accept the use of cookies. AcceptPrivacy Policy