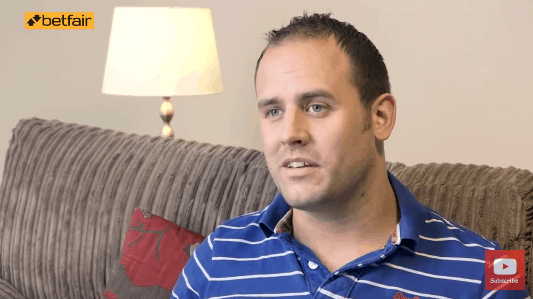 You may have come across Caan Berry in his current role as a Betfair trader or on his regular blog. As a professional Betfair trader, he is enjoying considerable financial success, though it hasn’t always been that way. He says that for most of his life he was “just stumbling along without any real purpose”. Here is his story.

Like many of us, Caan took a while before deciding what he wanted to do. He’s always wanted to get ahead but had no idea how to do so, and there was little guidance available to him. He grew up in the Essex seaside town of Clacton-On-Sea but left school early and fell in with a bad set, getting into trouble frequently. His living arrangements were also precarious, mainly sofa-surfing and often broke.

Working as a burger flipper at McDonald’s wasn’t much fun either with 16-hour shifts at minimum wage and often in trouble for tardiness. Eventually, he received a final warning and realised he was on the wrong road.

Next, he joined the army and made new friends and reasonable money with much active service, He served for seven years, but still felt that something in his life was missing. Then came that one event which would change everything. Assigned a specialist role and working alongside mercenaries, his unit was pinned down for two weeks under constant attack.

One morning, under the fiercest attack yet, he found himself,  nostrils full of the stench of burning metal and camouflage net, half covered in rubble contemplating a photograph of his finance anticipating the worst. Fortunately, the worst never came; he survived but realised that he wanted something different out of life.

Life After the Army

Back in the UK with his partner pregnant with their son, he decided to rebuild his life and make considerably more money than he had done so far. While in the army he had taken an interest in betting, though his simple mug betting approach failed to deliver success. However, in 2009 he came across Betfair trading and came to realise that was possible to make significant amounts of cash if he could only get it right.

For a while, he dabbled using various approaches and studied market movements carefully. With the added benefit of being able to watch his favourite sports, it seemed the ideal money making project to pursue.

For the first time in his life, he made a real effort to study, reading blogs and anything else he could find that would develop his skills and knowledge base. The more he studied, the more convinced he became that there was a fantastic opportunity to make big money that would far exceed anything he could earn doing a regular job. Not everybody agreed; many of his friends considered him mad, but he refused to listen to them.

It wasn’t easy. He had many failures working in complicated hard to understand markets, but slowly he honed his skills, never giving up on his dream. He says that “time and persistence will get you where you want”.

To say that it all paid off is an understatement. Today Caan Berry is totally his own boss, enjoys his day job enormously which he spends just a few hours a day doing, and claims to make more money than most people can dream of. He gets better at what he does every day, which gives him his true satisfaction. It is a very different lifestyle from the army. Nowadays he works when he feels like it, and when he doesn’t feel like it, he does something else.

He says that “Giving Betfair my full attention was the biggest and smartest step I’ve ever made in my life” adding that anyone can master what he does, it doesn’t require unique gifts, just hard work and persistence.

He believes that social media has made Betfair trading much easier to master. When he first started out, there was very little information out there, but today with numerous blogs, Facebook, and Twitter, it is easy to find similar minded people to share information and knowledge with.

Is he right? Can anybody make it from rags to riches as he has? We have no reason to disbelieve him. However, it takes a special self-belief, persistence and motivation along with the ability to always get back on the horse even if it falls at the first hurdle.

Trade like a pro and check out Caan’s top trading courses here.

How to Make Money on Betfair