We have reached the end of our three month trial of Consistent Forex Trades and here are the final results:

We recently decided to expand our range here at Honest Betting Reviews and start looking at some forex and stockmarket systems in an attempt to find some money-making strategies.

So we started a trial of Consistent Forex Trades back in March and have just come to the end of our three month trial.

What are our findings then? Have we uncovered a forex trading gem?

Well sadly that doesn’t seem to be the case.

After three months we have finished 286 pips down, which when you add in the subscriptions costs of £100 + tax per month (following the first month at £1) then it has been quite an expensive trial.

What’s more, we have received no signals since 17th June, so well over two weeks which is a little strange and frustrating when you are paying over £100 per month to receive them.

We should stress that we were just trading the weekly “set and forget” signals and not the intraday signals.

So all in all we have to give this a FAILED rating and to move on elsewhere. 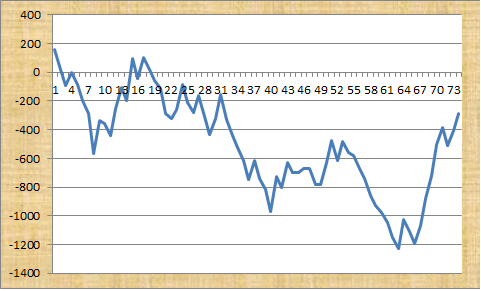 As you can see from the graph above, things were badly in the minus for most of the trial before making a recovery at the end.

Ease of use: The service is fairly straightforward to use, with signals sent out on a Sunday and then you can just set up the trades and forget about them. Simples!

Availability of prices: The recommended prices were generally always available or a tick or two either way.

Strike rate: The strike rate for the trial was 38%, which is well below the advertised 75% success rate.

Advised Betting Bank: No betting bank was advised, but we used a 1500 pip bank for the trial which seemed sufficient at the outset but did get threatened when we were 1200 pips down at one stage.

We had fairly high hopes coming into our trial of Consistent Forex Trades.

They had been averaging over 400 pips per month prior to our trial, which is pretty impressive stuff.

But sadly as we see so many times, that kind of performance wasn’t achieved during our live trial and in fact a loss of 286 pips was recorded.

Whilst that was not a huge loss in itself, when coupled with the high subscription costs of £100 + taxes per month, we felt this wasn’t a service we could continue following.

Things have continued to be a bit of a struggle for Consistent Forex Trades, who have lost a further 106 pips since our last update to sit at 479 pips down for the trial as a whole.

These results are for the set and forget trades, which are sent out on Sunday and then you can just put the orders in on your account and sit back and see what happens.

Sadly so far things during our trial haven’t matched the results coming into it, so hopefully things will pick over the remainder of the trial.

Back soon with further updates.

It’s been a tough start to our trial of Consistent Forex Trades, a forex signals service from a guy called Roger Elliot.

The service has two different types of signal – intraday signals that are designed to be primarily traded each day, and the weekly “set and forget” signals that are sent out on Sunday and set up for the week, then you can just forget about them.

We have just been following the “set and forget” signals for reasons of time constraints and these are 373 pips down so far after just under one month.

We understand the intraday signals are 328 pips down, so it has been a disappointing start for Consistent Forex Trades overall.

However, it is still early days and plenty of time to turn things around, so let’s hope for an improvement from the service soon.

Today we are starting a new trial of a forex signals service called Consistent Forex Trades.

What I initially liked about this service was the lack of over-hyped sales nonsense that you see with so many forex and trading services.

It just explains straight up what the service is and what it is not.

So no scammy and annoying videos and attempted up-selling, just an explanation that you are provided with weekly forex and equity price reaction trading levels and signals.

The service is run by a guy called Roger Elliot and there are basically three parts to it:

So plenty of options there for you to play around with depending on your preferences for trading.

We will focus on the set and forget signals as those will be the most straightforward to monitor and where there should be no ambiguity in terms of the results.

With the other ones, there will be a degree of personal judgement as to where to enter and exit trades so two people could get quite different results.

You can get a 4 week trial for just £1, which is a very good way to see which of the methods is best for you.

Apparently the signals have a 75% success record, which is very impressive.

In the 10 months it has been running, the service claims to have made just under 4,000 pips profit, which is just under 400 pips per month. Not bad at all, even if you are just trading at £1 per pip.

So hopefully the trades will continue to achieve consistency and deliver decent profits over the trial.

Back soon with our first update on how things are progressing.

In the meantime, you can check out Consistent Forex Trades here.

How to Pick a Winning Horse