We have reached the end of our seven month trial of Diff Code Transatlantic and here are the final results:-

Diff Code Transatlantic is a trading system for one specific market, a differential market between Wall Street and the FTSE – hence the “Transatlantic” in the name. It is part of a stable of Diff Code products from a former City trader called Martin Carter.

Diff Code Transatlantic is a “set and forget” strategy where you just check the website early in the morning (preferably before the markets open) and then place the trade.

It will give you the direction (buy or sell) and your stop loss and profit target levels. So you just place the trade and let it run.

The only thing you then need to do is check the next morning as to whether you need to close the trade (it it hasn’t already) or open a new one.

Coming into our trial, the results looked very impressive as they had apparently turned a £10,000 starting bank into £30,000 in 18 months using a compounding approach.

But how did it get on under live trial conditions?

We ran an extended seven month trial to give this a full chance to shine and show us what it was capable of.

Unfortunately though, after seven months we ended up 83 pips down in total.

Below you can see how the trial went in graph format: 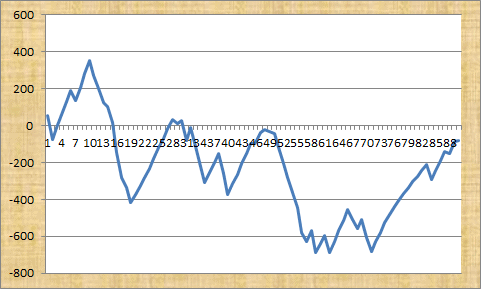 As you can see, we did go quite a way down before a strong rally towards the end.

There were a couple of trades early on that were losses for us but that Martin recorded as wins. That is because it depends what time you time you put the trades on and where the market is exactly.

However, either way it has been a fairly unspectacular trial and with a small profit or loss made depending on your trade timings, we feel a NEUTRAL rating is the deserved verdict here.

Seven months is quite a long time to go treading water, so this is not one we will be adding to the portfolio at the moment.

Ease of use:  As we say above, it’s a really service to follow with just 3 trades per week on average and it’s set and forget so no need to stare at charts for hours.

Availability of prices:  As we have discussed above, our results varied a little to Martin’s as we got on a few trades a little later in the morning. So your results may differ from the official ones, but overall it should even itself out.

Strike rate: The strike rate for the trial was 61%, which is a little below that claimed on the sales page of 68%, which is probably where it needs to be for this to generate a profit.

Advised Betting Bank: We used a 2000 pip bank for the trial and used level staking. Although Martin recommends using %age staking, we wanted to give a simple picture of results based on level stakes. Either way 2000 pips was very comfortable and our bank was never in danger.

Subscription costs: The subscription fees are £297 at the outset which includes a full, detailed hard-copy manual explaining the system and 6 months of the trades. If you want to continue receiving the trades after that six months, it is then £12.50 per month.

Plus there is a 45-day money back guarantee at the outset if you don’t like the service.

The Diff Code Transatlantic is a simple trading system that aims to predict movements in the Wall Street / FTSE differential market.

Its results coming into our trial looked very impressive but sadly under the microscope of a seven-month trial we came out 83 pips down.

Although the official results were a little better as we got in a couple of trades at the wrong time, either way the service finished close to even over the seven months we followed it.

Therefore we feel a NEUTRAL rating is fair here and it is a watching brief for the time being on this one.

A small loss of 41 pips for the Diff Code Transatlantic since our last update at the beginning of July.

That means we are now 128 pips down for the trial overall.

It seems as if the recent tensions between North Korea and the USA have been affecting the markets and that has hit the Diff Code Transatlantic this week.

Let’s just hope tensions don’t escalate further, or the least of our problems will be a few pips lost trading!

It has been a good run for the Diff Code Transatlantic, with 248 pips profit made since our last update towards the end of May.

That means we are now 87 pips down for the trial as a whole, although as we said in our last update, a couple of the trades that lost for us actually won for Martin (who runs the system) as it depends when exactly you put the trades on, so the results could be slightly better than this.

The good recent run included nine winners in a row in June, which is what can happen when the market gets momentum in a certain direction.

So pretty much even stevens so far for the Diff Code Transatlantic, but hopefully signs of a turnaround in the right direction.

Unfortunately there has been a reversal of fortunes for the Diff Code Transatlantic since our last update, with 685 pips lost in that time.

That means we are now 335 pips down for the trial overall.

It is worth noting however that two of our trades which lost were recorded as wins by Martin, who runs the service.

So that would have made a 337 pip difference to the results and would mean we would actually be 2 pips up so far.

That shows the importance of getting your trades on early, i.e. as close to 7.30am as possible. There have been occasions when we have been unable to do this, hence the variance in our results.

It’s been a good start to our trial of the Diff Code Transatlantic, which has racked up a tidy 350 pips of profit so far to level staking after three weeks of our trial.

As we said in our introduction at the start of the trial, this is very straightforward to operate and no previous knowledge of trading is required.

Just check the signal in the morning, place the trade and that is it – a true “set and forget” method.

Despite the name of this site including the word “betting,” we actually like to look a wide variety of money-making opportunities beyond just gambling systems.

So we include forex signals, stock market tips and really anything that looks like it could be profitable.

To be honest, if it makes money then we don’t really care what particular medium it focuses on!

In that spirit, today we are taking a look at a trading system called the Diff Code Transatlantic.

It is part of a range of “Diff Code” products put together by a guy called Martin Carter, who was a risk manager at a leading financial services firm before retiring at 49 (alright for some eh?).

The other Diff Code products include Diff Code Europe and Diff Code Oil.

This is a straightforward trading product that provides a direction for trading a particular market.

It is a “set and forget” system, so you just need to check the website in the morning, see what direction Martin recommends for the day and then place your trade.

Then you don’t need to do anything else, just check at the end how much you have won or lost.

The term “Diff Code” is to do with the fact that it trades a differential, which is basically a market comparing two different indices.

“Transatlantic” is because the differential in question compares a US index with a UK one.

The system is all about having your position hedged in the markets, so you are protected if the markets crash.

As Martin’s speciality was managing risk, you can understand that this would be his approach.

We were drawn to this after seeing the exceptional results, which have seen it turn a £10,000 bank into over £30,000 in around 18 months using a compounding approach.

If those results could be repeated in a live trial and maintained long term, then we could have a great – and very simple – way of making some additional income with a minimum of effort.

As we always say though, the proof of the pudding is in the eating so we will see how the service gets under live trial conditions.

Without further ado, we will get the live trial underway and will report back soon on how things are going.

In the meantime you can check out the Diff Code Transatlantic here.

Advantage Play Secrets – Final Review
Scroll to top
We use cookies to ensure that we give you the best experience on our website. By continuing we assume you accept the use of cookies. AcceptPrivacy Policy