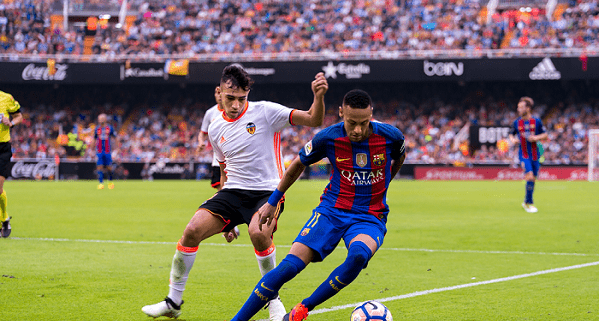 One of the most under-utilised options in football is betting on the draw. It is often overlooked by punters yet accounts for around 25% of results in football matches.

There is potential to capitalise on betting on the draw if you go about it in the right way. Quite often the odds of the draw are inflated and there are certain teams and leagues that have a propensity to produce draws. Plus there are circumstances when a draw becomes a likely outcome.

We’ll have a look at some systems for betting on the draw below.

Backing the Draw in Football

Most of the time when we are betting on football, we like to back one team or the other. We think one team has a better chance of winning due to form, their players, tactical advantages or for any number of other reasons.

Some of the time though, there is an appeal in backing the draw. It might be that you are anticipating a tight match, or the teams are particularly adept at getting draws or there is a scenario when the draw does both teams a favour.

In some leagues, nearly a third of games finish in a draw so there can be ample opportunities to find a winning angle.

Getting the Best Value when Backing the Draw

When backing the draw it is important to ensure you get the best value. We would recommend comparing the odds at the bookies via an odds comparison site like Oddschecker or Oddsportal and also the odds at the exchanges.

Unlike some more niche markets, often there is not too much difference between the best bookies’ prices and the exchange odds on the draw market, particularly if you include the Asian bookies. Either way you want to squeeze out as much value as you can, so make sure you shop around for the best odds.

Even though the draw is one of the main betting options in a match in the 1X2 odds market, it is often overlooked by punters.

This may be because, as we mentioned earlier, most bettors like to bet on a particular team to win. That gives them a chance to cheer on that team, whereas cheering on a draw can feel a bit strange.

So if you look on Betfair at the amount of money matched on the outcome of a game, the draw tends to attract a smaller proportion of the betting volume than the teams to win.

Here is an example from the Spanish Super Cup match between Real Madrid and Athletic Bilbao.

Whilst Real Madrid are priced at 1.82 and the draw is priced at 3.9, there is a much greater proportion of money placed on the teams to win than on the draw.

Looking at the volume of bets, over £41,000 has been matched on Real Madrid: 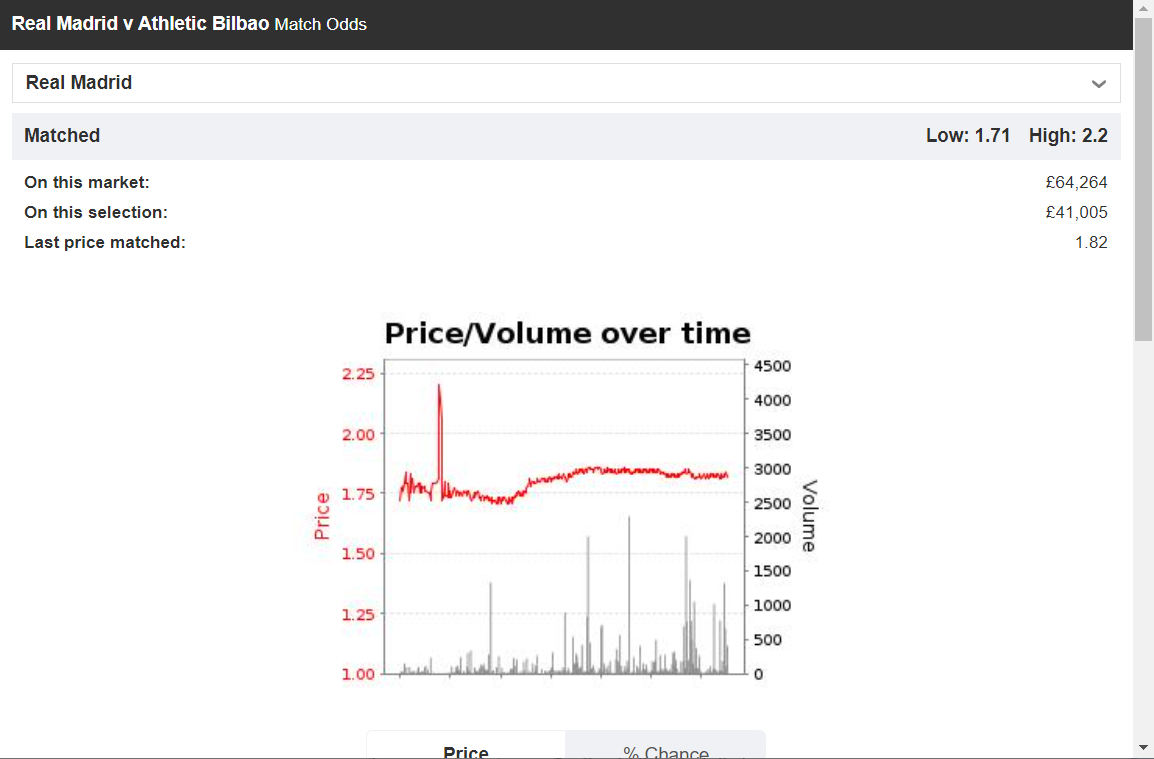 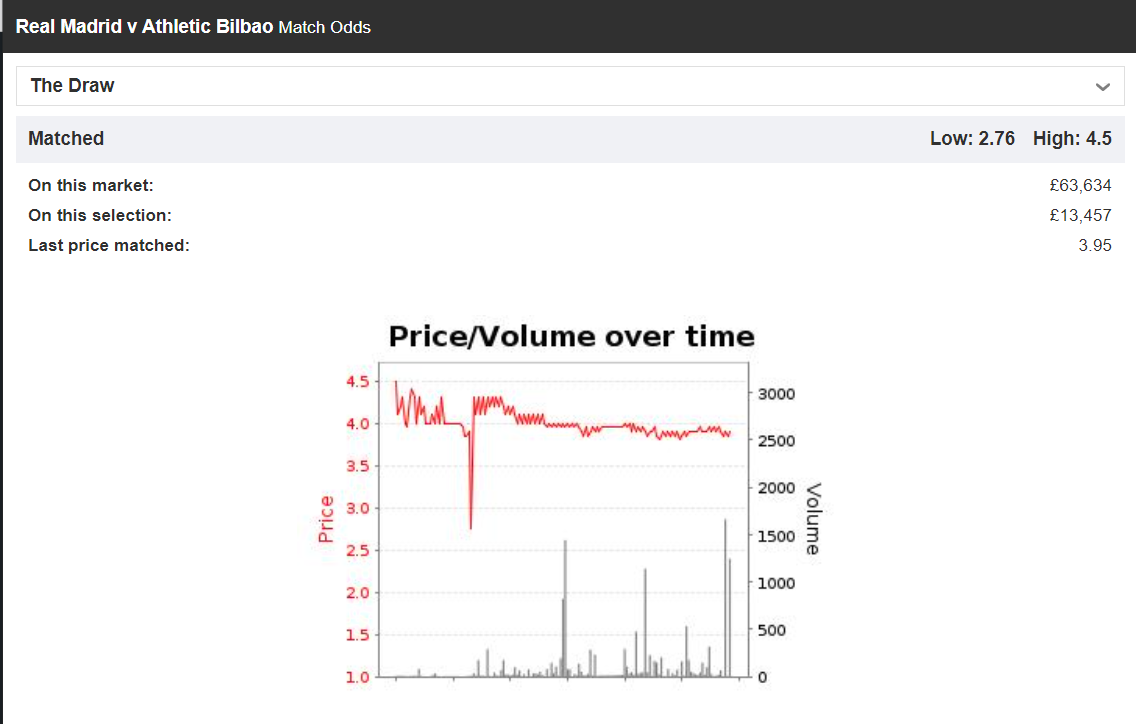 In theory the amounts matched should be about the same on all three, but this is very rarely the case.

What this means is that the bookies will often offer “draw inflation” – or in other words a slightly higher price on the draw than they should. This is because they know not many people will back it.

———–Check out our number one recommended football tipster here————

If you are going to bet on the draw, it is very important to pay attention to stats.

Some teams – and even some leagues – have much higher numbers of draw than others. Using a website like soccerstats, you can see some strong examples of this.

If we have a look at the Brazilian Serie A for the 2021 season for example, you will see the high proportion of matches finishing in a draw:

As you can see, 30% of matches in the Brazilian Serie A finished in a draw over the season, which is a high proportion relative to other leagues around the world.

Take the German Bundesliga for example, which had only 26% of games finishing in a draw:

And there are some teams who have a high propensity for drawing matches.

Here we have the Brazilian league table for the whole season: 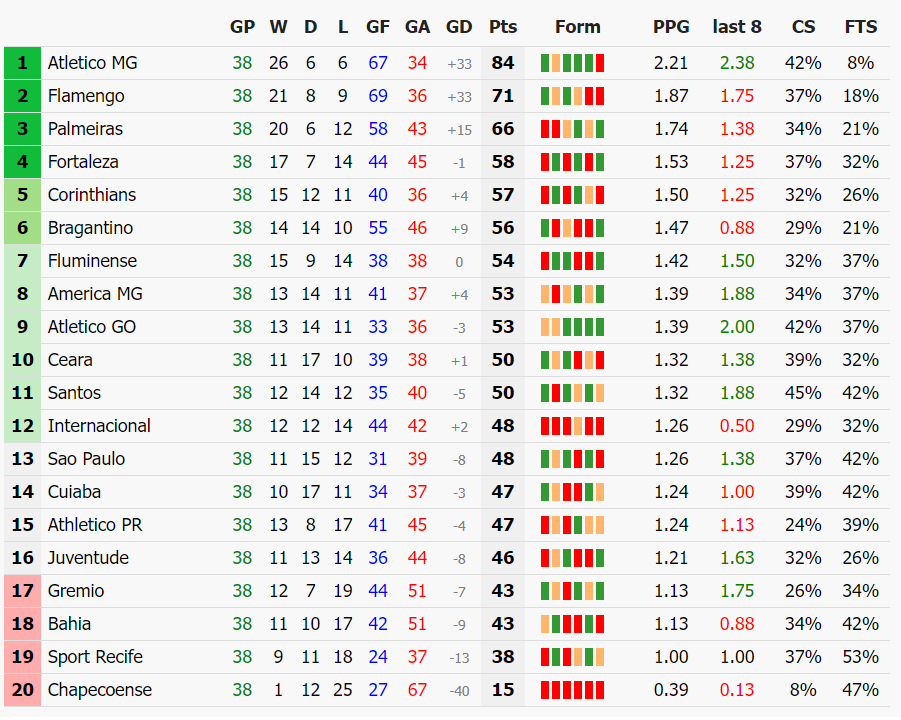 As you can see, Ceara drew an astonishing 17 of their 38 matches – in other words, nearly half of their games! They would be have been a good team to back the draw on over the season.

Looking “Under the Radar”

Whilst these teams might be worth backing to draw on a regular basis, it could also be the case that they are rather “obvious” ones and the odds for the draw are likely to be accordingly low. In low-scoring leagues like Brazil, the odds of the draw in general tend to be lower.

So in searching for value it may be better to look for the not so obvious picks that go under the radar so to speak.

Looking at the 2020/21 La Liga season, it may have surprised some to see that Villareal drew a large number of their games:- 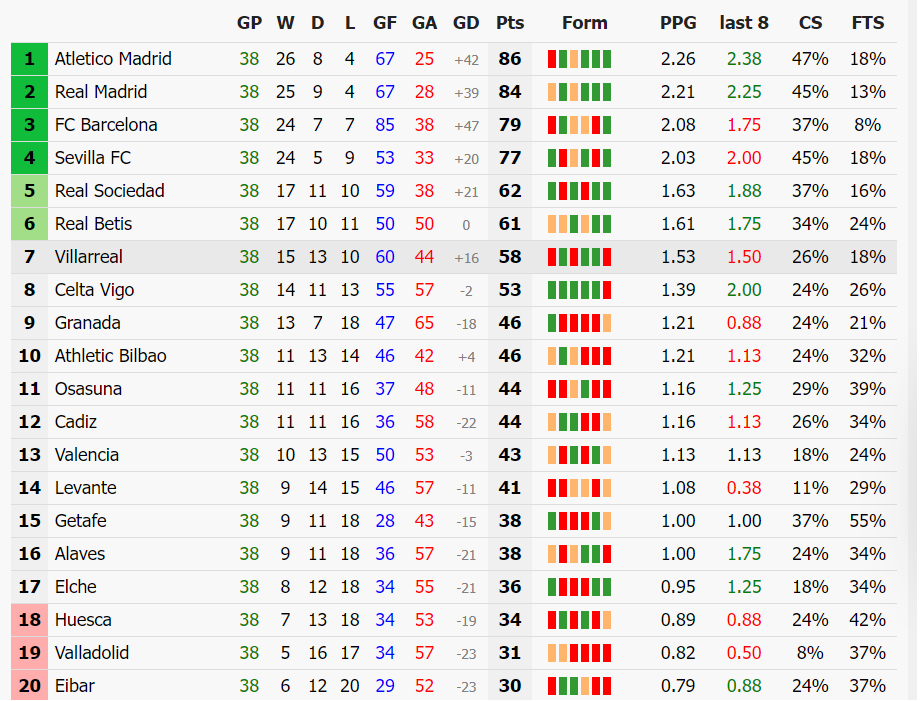 As you can see they drew 13 games, which is a high number for a team finishing in the top seven of the table and going on to win the Europa League.

That was nearly as many games as they won. And quite a high proportion were at home as well, where they drew 6 but won only 8 games.

Villareal were quite a high scoring team, with 60 goals scored during the season. But they had a lot of 1-1 draws – seven of them in total.

So they struggled to kill teams off, despite having quality attackers like Gerard Moreno and creative midfielders like Dani Parejo.

You could have got decent odds on the draw for their matches though, particularly in their home games where they are typically fancied by the bookies.

Often the draw would be priced between 4 and 6, representing great value for draw backers.

So this is an example of finding value draw bets that may not be the “obvious ones” but actually represent significant value.

Obviously it is important to recognise that team dynamics change over time and things like a new manager or new personnel could reduce the number of games a team draws. So it is important to monitor these things from season to season rather than presuming teams will stay the same all the time. 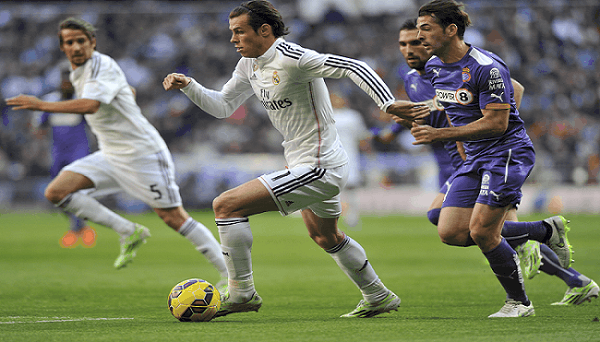 Another approach to backing the draw is to wait until matches have gone in-play and look for higher odds on the draw during the match.

It might be that one side has gone 1-0 up, meaning the odds of the draw will normally increase (unless the team scoring and large underdogs). However the losing side might be dominating the game and creating plenty of chances, looking like they will equalize.

In such circumstances, it can be advantageous to back the draw as if an equalizer comes you will have a chance to cash out.

So the draw odds may be in the range of 4.0-4.5, offering significant value if the side that is losing is pressing forward and looking likely to score.

You can tools such as the In-Play Trading scanner to monitor dozens of matches at the same time and identify where such instances are occurring. It will alert you when one side is creating lots of pressure and getting close to getting back on terms.

Alternatively you can use sites like Flashscores or Sofascore that have live stats you can use.

The great thing about this approach is that if there is a late equaliser, you will be sitting on a very handsome profit as the draw odds may have moved from around 4.0 to less than 2.0, meaning you can cash out for guaranteed profit. If the equalizer comes very late you will be looking at a substantial profit.

In this guide we have attempted to describe some possible ways to profit from betting on the draw. However, the best draw betting system we have come across is from a professional bettor called JK Diego.

He spent considerable time studying the factors that lead to draws in football matches and identified eight separate indicators. Putting them all together, he was able to identify where the odds of the draw were much higher than they should be.

Those are very impressive results – in fact some of the best we have seen from any football system in our many years of testing. JK Diego’s Draw Betting System is well worth checking out if you’re interested in learning from someone who bets professionally on the draw. 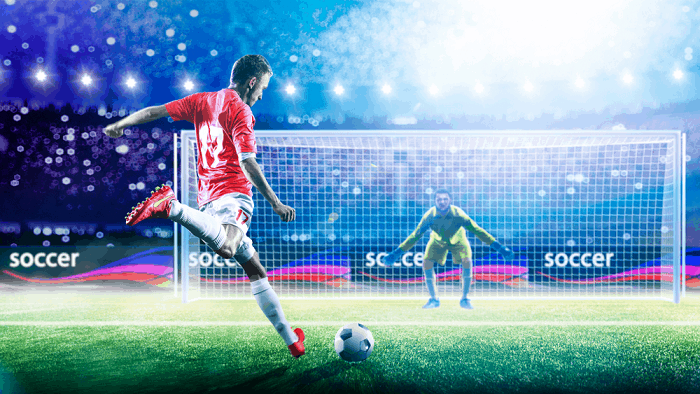 Backing the draw is one of the main ways of betting in football and there are potentially ways to profit from it if you equip yourself with the right stats and preparation.

Studying the way teams play and those that a propensity to draw a lot of games is one way to approach the market.

Another strategy is to wait until the match goes in-running and then to see how things develop.

Either way, if you are going to back the draw then please gamble responsibly and only risk what you can afford to lose.

Good luck with your betting and we hope you have found this guide useful.

Lucrative MMA Betting Tipster – Final Review
Scroll to top
We use cookies to ensure that we give you the best experience on our website. By continuing we assume you accept the use of cookies. AcceptPrivacy Policy