We have recently come across a new ICO (Initial Coin Offering) for a cryptocurrency called Envion and we think this has amazing potential.

Basically what Envion are planning to do is change the face of how cryptocurrencies like Bitcoin are mined.

If you are familiar with mining, you will know that it is very energy-intensive. It requires large rooms filled with masses of computer hardware that use up a lot of electricity as well as needing to be cooled, which requires additional energy.

A large proportion of mining farms are concentrated in China and Russia and are based on fossil fuel energy, the pollution from which is harmful to the environment and human health.

At the same time, something has been going on in energy markets that has surprised a lot of people. The cost of renewable energy – particularly solar energy – has been plummeting in recent years, putting it on a par or even cheaper than fossil fuel energy in some parts of the world.

Unfortunately though, in some particularly sunny places there are actually over-capacities of electricity – where more is produced than is needed locally.

So in places like California, they have to pay neighbouring states to take their excess electricity at times so it doesn’t overload their grid.

In other places excess electricity is effectively lost and in some areas such as remote parts of India, solar plants are not even connected to the grid because of low local energy demand.

Envion intend to take these two different factors – the centralised nature of mining in Russia and China and the plummeting costs of renewable power – and disrupt them with a revolutionary new approach.

What Envion plan to do is place mobile mining units (MMUs) right next to renewable energy plants like solar and wind farms.

In this way, they can take advantage of the very low energy costs and over-capacities of these plants and use the electricity to power their mining units.

The plan is for Envion to have hundreds – and even thousands – of these Mobile Mining Units stationed around the world at places where there is plentiful, cheap electricity.

Therefore they will help to decentralise mining once again as well as having a business that is scalable, flexible and hopefully very profitable.

How You Can Benefit

Envion have structured their token sale so that you can benefit directly from their mining operations if you purchase Envion Tokens.

This means the business should keep on growing and if things go well, this growth could become exponential: the more mining units they have, the more new ones they can make, and the more they have – and so on.

Projections on the Envion website estimate that with a $10,000 investment in the ICO, you could receive more than $177,000 over the course of five years, which would be a stunning return. 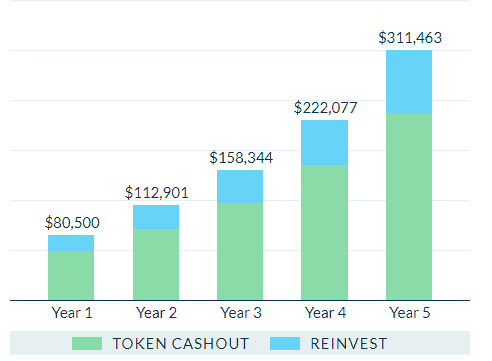 Now it should be borne in mind that these are just estimates and actual dividend payouts will vary depending on the profits, which in turn will depend on a number of different factors. However, Envion have produced some very detailed workings behind those figures, which you can check out here.

If returns do turn out that high, it would be a very profitable investment indeed for token holders.

It is also worth noting that Envion are aiming to secure deals with Third Party Operators (TPOs), who are outside companies that would pay for Envion’s mobile mining units and get a share in the profits.

Token holders would also get 35% of those profits on top of the profits they will already receive from Envion’s own mining operations, with no dilution. So the profits could actually be considerably higher than those forecast on the Envion website.

Of course, there are still risks that things could go wrong – technical problems, competitors, regulation and so on – so as with any investment you should be aware of the risks before taking part and do your own research and due diligence.

The ICO commenced on 15th December and finishes on 14th January 2018 (or until all the 150 million tokens are sold, if that comes earlier).

They state that 91% of the proceeds from the token sale will go to the production and deployment of MMUs and 9% will go to research and development and administration.

The Envion Tokens (EVN) are priced as follows during the ICO:

The ICO has been going extremely well so far, with over 100,000 people registering before the ICO even started.

There was over $20 million raised in the first 24 hours and over $35 million has been raised so far.

One investor even came in with an investment of $5 million, indicating a great deal of confidence in the project.

Envion also report that they have a potential nine-figure deal (i.e. over $100m) being discussed at the moment with a third party operator.

So all in all things are looking very exciting for Envion and this looks like being one of the most successful ICOs of the year.

You can check out the Envion ICO here.

Disclaimer: we are not financial advisors and the above article should not be taken as financial advice. Please do your own due diligence and research and take professional financial advice before investing. All cryptocurrencies are risky ventures so please only invest money you can afford to lose.

Pinnacle Racing Tips – Final Review
We use cookies to ensure that we give you the best experience on our website. If you continue to use this site we will assume that you are happy with it.Ok
Scroll to top