Today we are going to take a look at a new ICO that has just launched called Spectre.ai, which will run until 10th December 2017.

Just in case you are wondering, this is not in fact anything to do with the James Bond film starring Daniel Craig, but is actually going to be the world’s first broker-free financial trading platform. Spectre stands for Speculative Tokenised Trading Exchange.

Spectre looks very interesting to us and is well worthy of further investigation.

Below we will take a look at what Spectre.ai is all about, how much you could potentially earn from it and whether we will be investing ourselves.

Forex and financial trading brokers have been associated in the past with fraud – particularly in the binary options sector – as well as market manipulation and conflict of interest.

For example, it has been known for “market makers” to manipulate prices of markets so that people’s stop losses get taken out, only for the price to then move back close to its original level. This is flagrant manipulation to the benefit of brokers and the cost of traders.

In addition, people who want to trade with a broker have to deposit funds with them, meaning they are trusting the broker with their money.

If the broker goes bust (as happened with a number of brokers in 2015 when the Swiss Franc decoupled from the Euro) then potentially you could lose all your money – and some people have done.

Some of the worst examples of broker abuse include brokers like Banc de Binary, a digital options broker that was ejected from the U.S for defrauding clients (and went on to shut down in 2017) and FXCM, a major forex broker that traded against clients and others.

And if all that wasn’t bad enough, if you end up consistently winning money with a broker, there is a real risk they will just close your account!

All of these problems arise from having to have a broker as a “middle man” between people who want to trade various assets with each other.

With so many problems rife in the financial trading industry, this is where Spectre come in.

Spectre.ai will be the world’s first broker-less financial trading platform.

Spectre will allow you to trade everything from binary options to forex, stocks and CFDs on the platform, but without the problems that can go with having a broker act as an intermediary in transactions.

It will replace the broker’s function with an autonomous, decentralised liquidity pool (i.e. a pool of funds to cover people’s trades).

The liquidity pool will be initially funded by a token sale, with investors receiving tokens in return.

The broker will be replaced by a smart contract which will entirely remove the possibility of human manipulation of the market and allow a seamless trading experience.

An Industry Ripe for Disruption

Spectre have identified an industry ripe for disruption in the online trading world.

Billions of dollars are traded every day on online trading exchanges and yet to date this trading has always required a broker to function, with all the potential problems listed above.

The power of the blockchain to disrupt this situation and replace the middleman with a smart contract is immense. 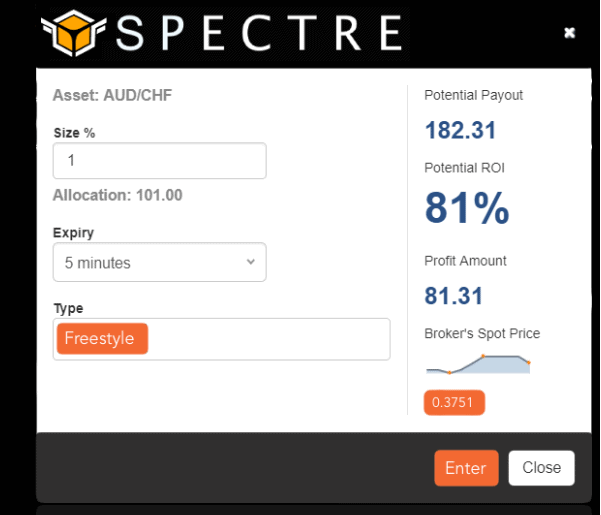 An example of a Spectre trading slip.

Instead of making money mainly on trader losses, Spectre’s fees are instead generated on volumes (wins or losses) in Spectre, thereby moving away from the traditional conflict of interest model.

Their trading platform will be built on the Ethereum blockchain, which should provide stability and reliability in handling the smart contracts on the platform.

Even just capturing a small portion of the online trading market could make Spectre.ai a very lucrative investment. Indeed, the retail FX market is worth over $81 trillion every year.

There is an 11% bonus on any tokens purchased before noon (GMT) on 24th November 2017 – click here to take advantage of this bonus.

There will be a hardcap of 240 million Spectre tokens.

At the time of writing with Ethereum priced at $355, that means one Spectre Token is worth around 18 cents.

So far they have raised just over $9 million towards their target of $30 million.

After the end of token sale the remaining unsold tokens will be burned and the share of all token holders will be proportionally increased, on a pari-passu basis. 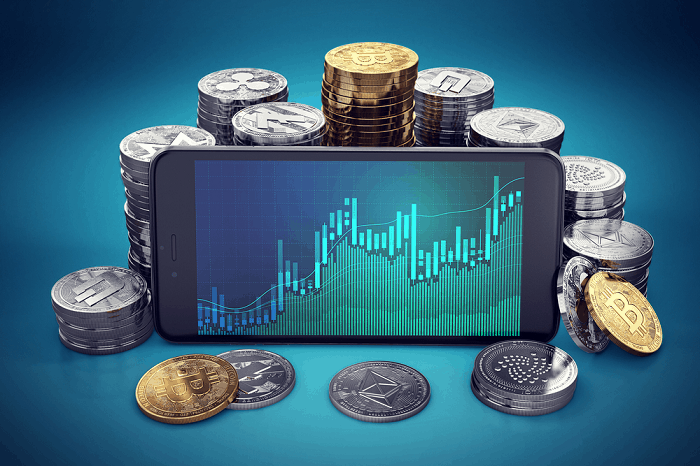 There will be two tokens available as part of Spectre.ai – the utility token and the dividend token.

The Utility Token – SPEC-U – offers its holder higher payouts on the trading platform, a wider variety of assets as well as participation in the token buy-back program.

In the buy-back programme, the Spectre team will use 3% of fees generated to purchase Spectre Utility tokens, up to a maximum of 15% of the outstanding supply. This buy-back programme will reduce the supply of tokens and serve to increase the price.

The Dividend Token – SPEC-D – will pay a 2% dividend to its holders on the basis of the trading volume on the Spectre platform. Dividends will be paid weekly, with a special dividend paid annually.

This is represented in the table below: 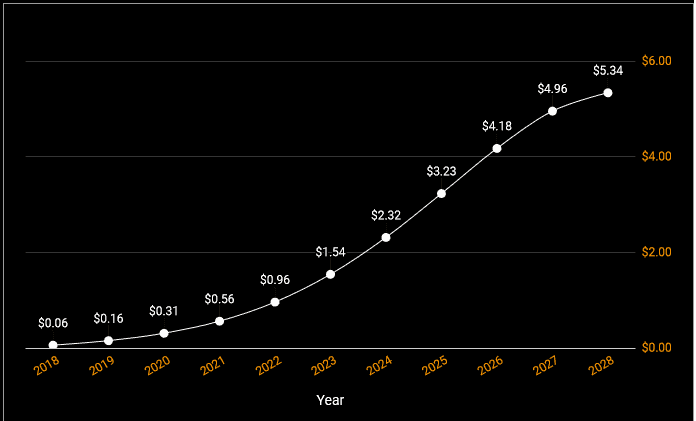 Those returns would be absolutely phenomenal and would smash just about anything available on the stockmarket in terms of ROI.

It is also important to bear in mind that these are just projections and we don’t know whether they will prove to be accurate, but it gives you an idea of how much dividends may be if the trading volume hits certain levels.

The Spectre Team brings an impressive range of skills from the financial, blockchain and investment worlds.

Here is a rundown of some of the key team members:-

So as you can see, an impressive team combining a wealth of expertise and talent that should hold Spectre in good stead.

So there you have it, a summary of the Spectre.ai ICO. What do we make of it then?

Overall we think this has some of the key ingredients for a successful ICO and cryptocurrency project.

They have identified an industry that is ripe for disruption – or to “drain the swamp” as they put it – and where the blockchain can provide a solution to some of the major problems in that industry.

In this case, the problem is the unreliable nature of forex and trading brokers and the conflict of interest between them and their clients.

The blockchain can provide a solution to this by utilising smart contracts that remove the need for a broker entirely.

If they could execute such a platform successfully, then it would indeed be a major achievement and could significantly disrupt the industry.

In terms of being a success for investors and generating strong returns for them, that will rest very much on the number of users they are able to sign up to the platform.

That in turn rests to a large extent on two things in our view: marketing and user experience.

There are some competitors in this space doing similar things – LA Token and Nagacoin for example. So it could be a crowded marketplace.

However, all Spectre need to do is secure a small share of the market and they would still be very successful based on the figures they have set out.

The projections they have put forward showing 150,000 members by 2025 seems achievable to us and if they could reach these kind of numbers then the return on investment for participants in the token sale who hold on to their coins looks to be very favourable indeed.

For this reason, we will be investing in this token sale and will look to hold our coins for the long term to hopefully accrue both dividends and capital appreciation.

If you are thinking of investing, please be aware that all cryptocurrencies are risky propositions and you could lose all your investment, so please only invest money you can afford to lose. Please also bear in mind we are not financial advisors so you should do your own research and make your own deicions based on appropriate professional advice.

As we say though, we like the look of Spectre.ai and will be investing some funds here.

You can check out the Spectre Token Sale here.