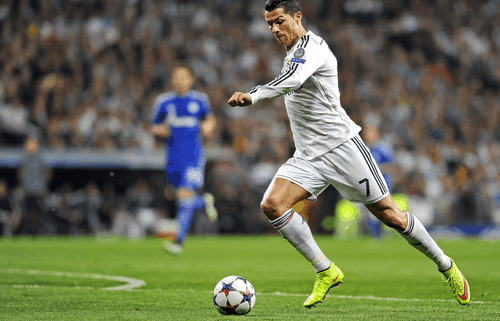 We have reached the end of our three month trial of Football Acca Tips and here are the final results:

This has been one of those trials where unfortunately pretty much everything that can go wrong does go wrong. Sometimes that happens in betting when you just hit one of those horror runs and nothing seems to go in your favour.

With the trial finishing 113 points down and losing 75% of the bank, it is difficult to give this anything other than a failed rating. 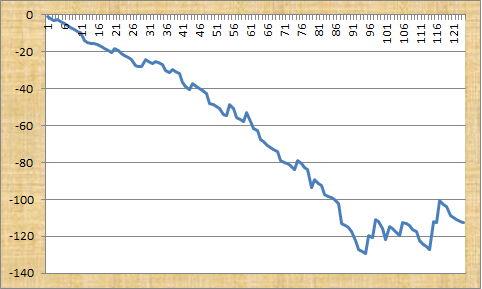 As you can see, it does somewhat resemble a ski slope with just a small bounce towards the end and the graph represents what was a tough trial.

However, as a lot of the tips recommended are accumulators, there was always the chance that if one of those had landed then things could have looked a whole lot better.

It’s a bit like golf betting where you can go a long time without a winner and be well down, then one winner at 100/1 completely changes the picture.

So we will keep an eye on things here and see if they can land a big winner or two and turn things around.

Ease of use: The workload is quite low with bets not coming every day, but normally just when there are Premiership/FA Cup matches and Champions League matches. There is a bit of time required to find the best odds for your accumulators, but that can be made quicker via oddschecker’s bet basket feature.

Availability of prices: Good – with bets being in the Premiership and Champions League, liquidity is obviously good and there are no problems getting the advised prices.

Strike rate: The strike rate for the trial was 16%, which is obviously well below where it needs to be to make a profit.

Advised Betting Bank: The service uses a 100 point bank which resets at the start of each month (if only that would happen in real life!) but we used a 150 bank for the trial as a whole, which nearly got wiped out, decreasing by 75%.

Subscription costs: The costs are £1 per month followed by £9.99 per month.

Well it’s tough to know what to say when things go this badly. Just one of those things in betting, they have had no luck and hit one of those horror runs.

We intend to keep an eye on things to see if they can land a big winner or two to turn things around, which can easily happen when a service tips at long odds like this one does.

That means overall they are 84 points down for the trial after two months.

They do tip at big odds for some of their accas – sometimes up to 1,000/1 – so all it takes is one of those to come in and things would turn around dramatically.

We have a month to go in the trial so let’s see if they can land one of those juicy accas and end the trial in profit.

It’s been a tough start to our trial of Football Acca Tips, who are 21 points down after about three weeks of tips.

They have been close with a couple of their accas though, getting 3 out of 4 on two occasions, so things could have easily been better.

They also tip at some big odds – most notably they had one tip at odds of over 5000/1 – definitely the biggest price of any tipping service we have encountered so far here at HBR!

That was for Diego Costa to score first and England to win 2-1 when Spain played England. Didn’t come in obviously, as Spain ran out easy winners in the end.

Anyway, still early days for this service and not many bets to go on so far, so plenty of time to get things back on track.

To date here on Honest Betting Reviews we only have one football betting system that has successfully passed a three-month trial and that is Banker Bets. However, we do have five systems currently under review, so hopefully we will find another one soon.

Today we are adding another football service to that list and it focuses exclusively on accumulators. The tipster in question is called Football Acca Tips.

Bookies apparently love punters who bet on accumulators – they are often seen as the ultimate “mug punters.”

Hence in the old days before internet betting (those of you old enough to remember that!) bookies used to require a minimum of trebles if you wanted to bet on football.

Can you imagine that?! Not being able to bet on a single team – bookies thought it would be too easy for punters to win.

Well fast forward 20 years and their worries were completely unfounded – even betting just on singles, most punters would still end up losing money. Yes we really are that bad at gambling.

But it did reveal two things:-

Whilst recognising the tag of “mug punting” that tends to be associated with backing accumulators, at the same time I think of some of my best gambling wins and a lot of them have been accumulators. Sometimes you just get a nice combination of things you think will happen around the same time.

For example I had a very nice one recently which included Djokovic to win the US Open, three banker Champions League matches and New Zealand to win the Rugby World Cup.

All of those sounded quite straightforward and yet I got combined odds of just under 10/1.

And of course they all came in 🙂

So it is with interest that we head into this trial of Football Acca Tips and see if they can make a profit from backing accumulators.

There don’t seem to be any results published on the website, so we will just have to see how things get on during the trial.

Please check back here for updates.

In the meantime you can check out Football Acca Tips here.

Eclipse – One of the Greatest Race Horses

The Battle of Quashed and Omaha at the Ascot Gold Cup
Scroll to top
We use cookies to ensure that we give you the best experience on our website. By continuing we assume you accept the use of cookies. AcceptPrivacy Policy