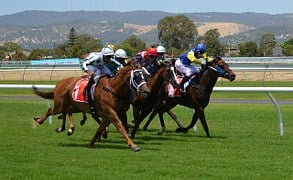 It is set to be a cracking renewal of the Grand National this year and hopefully the historic Aintree course will be bathed in majestic sunshine.

Here are our tips for the feature race:

It would be a true fairy story if 19-time champion jockey A P McCoy could saddle the winner in his 20th and final Grand National. A winner of the race in 2010 with Don’t Push It, McCoy has a very real chance of doing so again with Shutthefrontdoor, who is owned by JP McManus and trained by Jonjo O’Neill. A winner of the Irish Grand National in 2014 and a novice chase at Aintree in 2013, McCoy’s mount also won his last race, at Carlisle in November. The bookies are right to be worried about this one, with liabilities predicted to be over £100m if Shutthefrontfoor wins. What a story it would be.

Back Shutthefrontdoor: 1pt to win at 8/1 (general)

Trainer Dr Richard Newland won this race last year with Pineau De Re at 25/1 and he looks to have a very good chance again this year with Royale Knight. A winner of the Scottish Borders National over 4 miles at Kelso in December 2013, he showed he is capable of staying such an arduous trip not only with that win but following it with another in the Durham National at Sedgefield in October, where he cruised to victory. A thoroughly progressive horse, he has never fallen and only once pulled up, back in 2012.

They say “horses for courses” and if there is a horse that has shown a liking for Aintree then it is Oscar Time. Placed twice before at the Grand National with a 4th in 2013 and 2nd in 2011, he also won the Becher Chase at Aintree in December over the National fences at a shorter distance of 3m 2f, where he jumped supremely. Although 14 years old now, he is clearly still capable of mixing it in top company and no one would be surprised if this grand old horse was up there again this year.

Another horse who has shown a liking for Aintree and an ability to handle the National fences is Chance Du Roy. He finished sixth in last year’s race and ninth in 2013, as well as winning the Becher Chase at Aintree in 2013. Off a very good weight this year at 10 st 4 compared to 10 st 6 last year and 11 st 7 in 2013, will mean he has a very live chance of going a few places better this year.

A winner of 10 races in his career, Carlito Brigante is one that has slipped under many people’s radar. An impressive winner at Kelso in October, he also has Aintree experience with two third place finishes in his last two visits to the course, in May last year and October 2013. A very consistent sort with top 3 finishes in each of his last 6 races, at a big price Carlito Brigante could steal the show.

Please note Carlito Brigante is a non-runner, declared Friday 11.15am

For more tips like this, head on over to our free racing tips page to see a full list of the best free tips around.

US Masters Tips
Scroll to top