If you have been following us over the last few months you’ll have probably noticed that we are big fans of new football platform Sorare.

It’s a bit like online versions of Panini cards which you can buy and then enter into fantasy football contests to win prizes.

One of the issues in recent times however has been the high cost of cards, which we know has prevented some of you from joining the platform.

Well the good news is that last week Sorare launched a new type of card – called “Limited” cards – that dramatically lowers the cost of entry and opens the game up to many more people!

Below we’ll take a look at what exactly the new cards are all about, how they work and our advice for getting the best out of them.

First up though, a quick recap on what Sorare is all about, in case you aren’t up to speed on it.

Sign up here to get a FREE Limited Card once you have bought your first five cards at auction.

As we say, Sorare is a platform where you can buy online trading cards of footballers, a bit like Topps and Panini.

There are many of the top clubs on Sorare like Real Madrid, Juventus, Bayern Munich, PSG and Liverpool and many of the top players including Ronaldo, Neymar, Mbappe, Kimmich and soon, the great Lionel Messi is due to join the platform after signing for PSG.

The cards have a variety of uses. Some people just like to buy the cards as a collector’s item, much as people do with other sports trading cards, in the hope that they will increase in value over time.

Others like to trade the cards, buying and selling them on the market with the aim of making a profit.

However, the additional use-case with Sorare cards is that you can enter them into fantasy football contests to win prizes.

It’s a lot of fun and the prizes are quite amazing. If you’ve followed along with our own journey you will have seen we have been doing quite well in the game and amassing some very good rewards.

So that’s Sorare in a nutshell. If you want more info about how Sorare works, please check out our full Guide here.

Now let’s move on to looking at the new type of cards just released by Sorare.

There are different types of cards on Sorare and these are grouped by their “scarcity” – or how many of that particular type of card can be released each season.

The fewer there are of a category of card, the more valuable they are and the more power they have within the game. The cards are colour-coded to help identify them easily.

Up until now, the scarcities have been as follows:-

One of the issues Sorare have had is that with the popularity of the game having increased significantly in recent months, having a very limited supply of cards (a maximum of 111 of each player per season) has led to prices exploding. Sadly this priced some people out of the game.

The solution is the release of these new “Limited” cards. There can be up to 1000 of them minted each season, meaning a very substantial increase in supply.

These new Limited cards have an attractive yellow colour, as you can see below:- 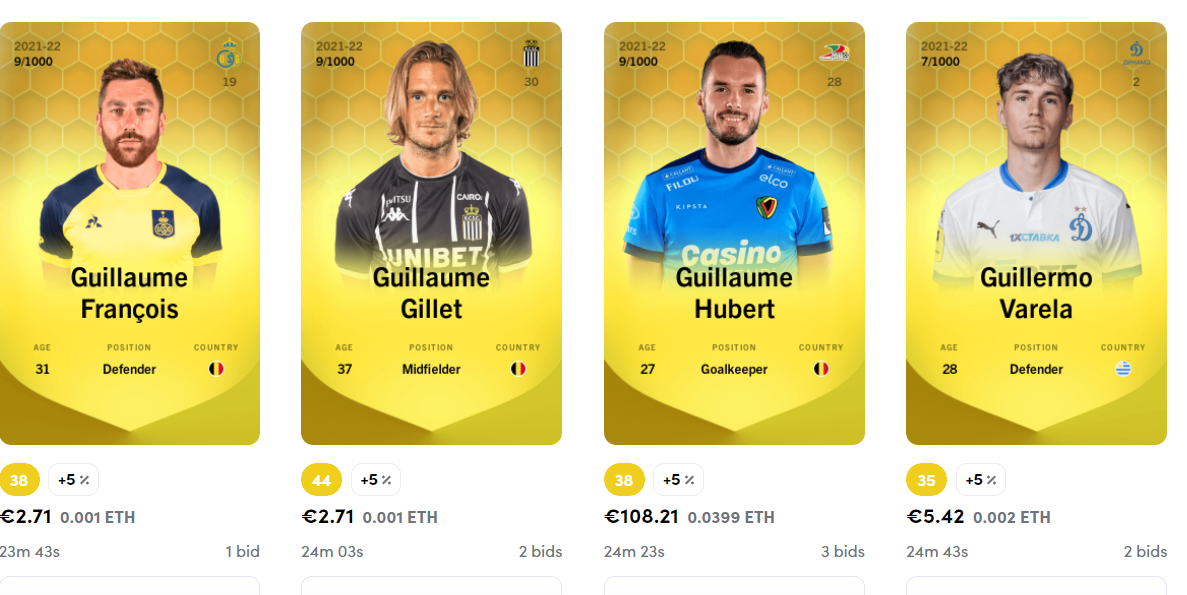 As the cards were only released last week, the prices have been fluctuating around quite a bit whilst the market settles. However, in general they are significantly cheaper than the rare cards and in some cases around a tenth of the price, which is great news for those wanting to enter the game at a lower price point.

How Can You Use these New Limited Cards?

The new Limited cards are very much separated out from the other cards in that they will have their own division in the Sorare fantasy football contests. This will be Division 5.

At some point Sorare may allow a bit more “mixing” between divisions, with for example some rare cards being given as prizes in Division 5 or perhaps one Limited card being able to be used in Division 4. For the moment though everything is being kept separate.

How Can You Get the Best Out of the Limited Cards?

It is very early days in the lifetime of these new cards so it is difficult to draw too many conclusions at this stage in terms of how things will play out.

However, if there’s one general principle in Sorare it’s that you want to get the best cards. It sounds obvious we know – but in terms of the fantasy contests, your ROI is likely to be higher if you have gone for the best cards.

That’s not just in cumulative terms, but in percentage terms as well. Having the best cards means you have a higher chance of winning cards as rewards, which means you can win back your investment faster – and it gives you a better chance of winning even more cards. It’s a kind of virtuous cycle – or vicious cycle – depending on which way you look at it.

So we would say be selective and focus on the top talent – players who score big on Sorare. We have written a detailed strategy guide here that gives some advice about scouting players.

Our feeling is that card prices may dip a little as many more of the Limited cards are released. In the main we would say just keep an eye on prices over the next couple of weeks as they may come down a touch compared to the early releases.

How to Get TWO FREE Limited Cards!

The good news is you can get a FREE Limited card when you buy five cards at auction if you sign up using this link.

So you’ll get TWO FREE LIMITED CARDS when you have bought five cards at auction. That will give you a real boost to get you going and put you one step ahead of other managers.

And of course when you sign up you will also get 12 FREE Commons cards to start you off, which can then be used in the starter Rookie League for 8 weeks (but not bought and sold).

So it’s a great time to get started!

Good luck with your Sorare journey and as ever please just drop us a line at info@honestbettingreviews.com if you have any questions.

Get Top Football Betting Software to Kick Off the New Season