We have come to the end of our three month trial of Slow Horse Luke and here are the final results:-

Slow Horse Luke is a horse racing laying service which provides about two selections per day.

The service is run by a guy called Luke Glover and he looks for horses who he thinks have a lower chance of winning than the odds suggest, because they have a history of falling, are bad starters of a race or are quite simply too slow.

It must be said there are a dearth of good laying services out there, in fact there is only one laying service in our winning systems list and that is Little Acorns.

It is more difficult than you would think to make a profit from picking horses to lose. Certainly there are a lot more successful backing services than laying.

So it is good to see that Slow Horse Luke finished our trial with a profit of 14 points in the end to advised prices and 16 points profit to Betfair SP.

As you can see from the graph below, after being in loss early on we rebounded nicely in the second half of the trial. 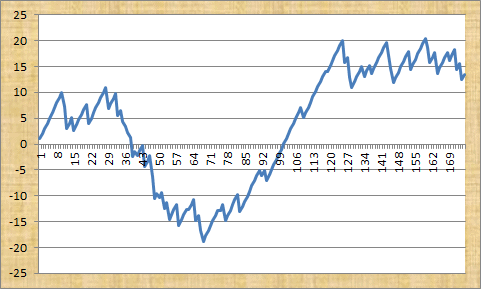 The strike rate was good at 77%, although as is the problem with most laying services, the bank growth over the trial was quite low at just 14%.

The problem with laying horses at odds of up to 6.0 is that a couple of losers in quick succession can do quite a bit of damage to your bank. It is often a case of two steps forward, one step back.

The growth in the bank for Slow Horse Luke wasn’t very high in comparison to some of the other successful horse racing services we have reviewed here on the site.

So whilst we are happy to give Slow Horse Luke a PASSED rating on the basis that it finished in profit, this is more a steady eddy service than one that will double your bank in a month or two.

If you are looking for a laying service though, this could be the one for you.

Ease of use: A relatively straightforward service to use with an average of just two bets per day, sent out in the morning. You will need to be able to access an exchange to be able to lay the bets.

Availability of prices: Interestingly at the start of the trial we saw quite a lot of pressure on prices, probably due to a lot of people subscribing to the service when it launched. Prices could move out quite significantly, making it tough to get close to the advised prices. However, things have settled down since then and there generally isn’t such a problem with prices. The best thing to do if prices do go against you is to wait for them to come back down, which they usually do. The Betfair SP results actually beat the advised prices, which backs this up.

Strike rate: The strike rate during the trial was 77%,  which is decent although not quite as high as the 90% claimed on the website.

Advised Betting Bank: A 100 point bank is advised for following the service, which we think is sensible and should cover the losing runs.

It is good to have found a laying service that has passed a trial here at Honest Betting Reviews as there haven’t been many of them over the years.

Slow Horse Luke is a nice simple service to follow and generated a solid 14 points profit over our trial.

Much like its name, this is a slow and steady service rather than one that will produce spectacular returns.

On the basis of our trial though we are content to award this is a PASSED rating and if you are looking for a laying service, you could certainly do worse than this.

A small improvement for horse racing laying service Slow Horse Luke since our last update, with another 3 points profit made at advised prices.

That takes us to 18 points profit for the trial overall at advised prices.

The service is a little inconsistent in its delivery, with some days seeing no e-mails received, even just to say there will no bets. Other days Luke sends an e-mail saying there will be a weekly review but then nothing is forthcoming.

Anyway, it is nicely in profit so can’t have too many complaints really.

The good form has continued for laying service Slow Horse Luke, which has made another 10 points of profit at advised priced since our last update.

That means it is now 15 points up for our trial overall at advised prices.*

Finding a good laying service has proved hard work so hopefully Slow Horse Luke can continue the good form and establish itself as a successful laying operation.

*Please note we did not receive an e-mail for 19th December so our results had not previously included the tips for that day. We have now received notification of the tips for that day and have updated the results accordingly. The previous results had stated a profit of 18 points overall at advised prices where as this has now been revised down to 15 points.

Slow Horse Luke has managed to turn things around since our last update, making 18 points of profit at advised prices.

That means we are now 5 points up for the trial overall.

At Betfair SP things are also much improved, with 13 points profit made since our last update and 7 points of profit made overall.

There has been a 14-bet winning streak which just came to an end yesterday but was nice to see and hopefully we will see more of that kind of form from Luke going forward.

It’s been a poor start to our trial of laying service Slow Horse Luke as we are 13 points down so far to advised prices.

At Betfair SP things have actually been slightly better, with only 6 points lost so far. That is because one horse won at a BSP of 10.6, but Luke advises not laying above 6.0, so that was a no bet if you were laying at Betfair SP.

But either way it has been a disappointing start. Sadly the horses chosen by Slow Horse Luke haven’t quite been slow enough thus far!

Let’s hope we have better news to report by our next update.

We have been getting a lot of e-mails in our inbox lately regarding a service called Slow Horse Luke, so we thought we would give it a try and see what all the fuss is about.

This is a high strike rate horse racing system, based on laying horses to lose on the exchanges.

The sales page claims that the system has a strike rate of 91.3%, which means that over 9 out of every 10 bets would be successful.

It also claims that the person behind the system – a person called Luke Glover – earned £26,872 from the system in 2015.

He claims to be a statistician and analyst by trade and after some research and tweaking of his strategy, came up with three key things to look for when laying a horse:-

So he focuses on speed ratings in short races, on the basis that a slow horse can only win a short race with a great start – anything other than that and it will have little chance.

In addition he looks for potential fallers during the jumps season.

One of the e-mails we received claimed this has just come off a winning run of 13 successful lays, which again sounds very good if accurate.

There are no results published anywhere on the sales page which always makes us a little worried however.

Anyway, we will put aside our skepticism for a little bit and see if this Slow Horse Luke system can deliver the kind of returns suggested on the sales page.

It only costs £14.95 per month to sign up so it’s not going to cost us too much to find out if it is any good.

We will run a standard three month trial and see how it gets on – results will be updated on this page.

In the meantime you can check out Slow Horse Luke here.

CoinPoker – Millions in FREE Giveaways!
We use cookies to ensure that we give you the best experience on our website. By continuing we assume you accept the use of cookies. AcceptPrivacy Policy
Scroll to top