We have reached the end of our three month trial of Soccer Goals Syndrome and here are the final results:

With a loss of 102 points, we would normally be inclined to say we were disappointed with Soccer Goals Syndrome.

However, the word disappointment is probably inappropriate here because we were sceptical about the system right at the outset.

Basically this is a system that focuses on finding selections in matches that meet specified criteria and then placing the selections into trixies.

The results published on the website look impressive, but we had immediate concerns on viewing them.

Firstly, there is no explanation given for why some leagues are used and not others, leading us to wonder if the results had been “backfitted,” in the sense of just selecting the leagues that showed profits but without any reasoning behind why those leagues might work.

We also greatly worry about any system that presumes the bookies (and exchanges) are systematically pricing up markets wrongly.

So whilst you may find bookies price things up wrongly for the odd match per week, to think they are systematically pricing up every match wrongly that meets a certain criteria seems fanciful.

And so it proved during our trial.

A very poor return on investment of -34% is enough on its own to give this a failed rating.

But after seeing this profit graph you would probably also be worried: 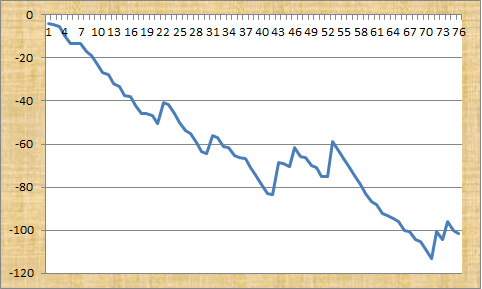 So it probably doesn’t surprise you to learn we are giving this a failed rating and placing firmly in the scrap bin.

We have tried a few Winningmore products over the years and sadly none of them have worked for us.

Soccer Goals Syndrome is another one to add to the list unfortunately.

We could not see any logic or explanation as to why the system would work and that was borne out by the poor results during our trial.

There was no explanation of why certain leagues are used for the system and that leads us to wonder if the results have been backfitted.

It has continued to be a struggle for Soccer Goals Syndrome, who have dropped a further 43 points to stand at -75 points for the trial overall.

(Our apologies for the mixed up date order in the spreadsheet – to protect the selection process we have to record all selections in a separate spreadsheet and then just record a summary of the results in the one above – which is more easily done by league than in date order).

We expressed some scepticism at the start as to whether such a broad-brush approach as that taken in this system can work and so far that scepticism has been justified.

We questioned why some leagues were used and not others, as there is no reasoning given for this in the system manual.

And with no analysis for individual selections such as looking at recent form or stats, it is difficult to see how a system like this could work in the long run.

Anyway, we have a few weeks left in the trial, so we will see if things pick up towards the end.

It has been a disappointing start to our trial of Soccer Goals Syndrome, which is 32 points down so far.

Basically the system revolves around putting selections in certain leagues into a trixie bet. The selections have to satisfy certain criteria and are found by having a look on Oddschecker or alternative odds comparison site.

It has been a little quiet with the Christmas break for the European leagues, so we haven’t had a huge amount of action so far.

But we haven’t hit a successful trixie yet, which is what is really needed for this system to make a profit.

Hopefully we will have better news at the time of our next update.

Today we are commencing a trial of a football betting system called Soccer Goals Syndrome from the Winningmore stable.

The system is billed as a simple one for football followers and apparently works on “most leagues around the world,” which is slightly ominous.

Having had a look at the manual, it is indeed very straightforward and should only take a few minutes a day to find the selections.

The published results include the following leagues:

A bit of a random assortment of leagues, not really sure why it is these ones in particular, that is not stated in the manual.

Obviously some of these leagues are on their break now so we won’t be using all of them at the moment.

We are normally skeptical that a system as simple as this can be effective. Our main concern is whether the 673 points profit came from the leagues in which the system made a profit, but how did it perform in other leagues and have the system authors just cherry-picked those leagues that showed positive results?

It would be helpful to have some explanation as to why those leagues in particular were chosen and others excluded.

Anyway, we hope our concerns prove unfounded and the system proves as effective as advertised on the website.

We will return soon with updates, but in the meantime you can check out Soccer Goals Syndrome here.