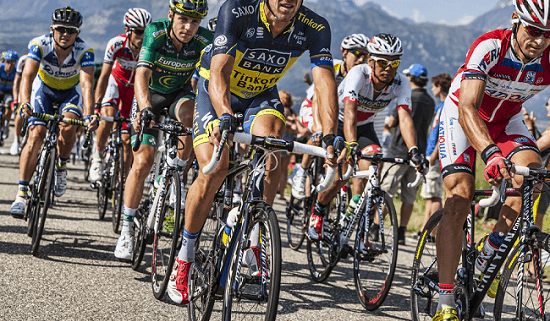 The 2019 Tour de France is already underway and this year’s race is certainly more open, with Chris Froome unable to participate due to his horrific injury earlier in the season. But, if you think you can predict who will win the Tour de France bet on the winner now.

Despite being in its early stages, incidents and drama are already unfolding – with Jakob Fuglsang, Dylan Groenewegen and Geraint Thomas all suffering crashes in stage 1, but able to continue the race. Here, we take a look back at some of the craziest moments in Tour de France history, beginning with who else, but four-time winner Froome himself.

Chaos ensued at the end of stage 12 of the 2016 Tour de France. Race leader Froome was forced to run up the steep incline of Mont Ventoux after his bicycle was so heavily damaged. The route had been revised due to plummeting temperatures and strong winds and as Froome rode to the finish line with Richie Porte and Bauke Mollema in tow, a TV motorbike came to a sudden halt and the trio crashed into the back of it. Froome came off worse, with his bike hit by a second motorbike that was following the three, breaking his seat stay.

His spare bike on the team car was a lot further down the mountain, so he decided to run the route instead – in his cycling shorts and helmet. A service vehicle eventually arrived with a much smaller bike, which he rode for a while, before his spare Pinarello was brought by the team car, allowing him to ride to the finish.

But the chaos wasn’t over. Froome finished sixth, with the yellow jersey awarded to Adam Yates; however, the bike was eventually found and whisked off for checks. It was then announced that Froome would be awarded the same finish time as Mollema, not only retaining his yellow jersey, but extending his lead to 47 seconds.

2007: dogged determination from the German

It was a tour to forget for the T-Mobile team in 2007. With Michael Rogers and Mark Cavendish failing to finish stage 8 and Patrik Sinkewitz unable to start stage 9, it seemed as though the team were cursed and stage 9 wasn’t without incident.

As Marcus Burghardt was innocuously cycling through a fairly easy stretch of the course, from Val d’Isere to Briancon, the German found himself flying over the handlebars after colliding with a Labrador that had decided to cross the path. Luckily, neither the dog nor Burghardt were injured, with the bike coming off worst in the collision. He quickly replaced the buckled front wheel and carried on… eventually finishing 127th in the race.

Every year, the Tour de France sees plenty of crashes, usually between riders but in the 1999 edition of the race, Giuseppe Guerini was felled in spectacular fashion. It was during stage 10, near the end of the difficult stage, at the Alpe d’Huez.

As Guerini was ascending the Alpe, a kilometre from the summit, a spectator holding a camera jumped in front of him to take his photo, with the Italian riding straight into him. Luckily, he managed to re-mount his bike and carry on (after receiving a pat on the back and slight push from the spectator to urge him on) to win the stage, his first in the Tour de France.

One of the strangest stories to have ever unfolded at the Tour de France belongs to French-Algerian, Abdel-Kader Zaaf, riding for North Africa. It was during the 13th stage, from Perpignan to Nîmes that the legendary tale developed – and it took another 30 years for Zaaf to confirm it himself, leaving many people wondering its validity for the years in between.

With scorching temperatures of up to 40C being recorded, there was still a long way to go in the stage (200km in fact) – and despite building up an impressive lead with his teammate Marcel Molinès, here’s where the story takes a twist.

Zaaf accepted a bottle from a spectator and hoping to seek hydration, drank from it. The liquid turned out to be some kind of alcohol and that mixed with the heat, caused Zaaf to zigzag, before he decided to shelter under a tree and fall asleep. He awoke when supporters claimed the peloton was fast-approaching, but Zaaf cycled off in the direction he came from – luckily not colliding with the peloton. But he was forced to dismount and was rushed to hospital. His compatriot Molinès won the stage.

Get Your Open Tips Here!
We use cookies to ensure that we give you the best experience on our website. By continuing we assume you accept the use of cookies. AcceptPrivacy Policy
Scroll to top