We have reached the end of our three month trial of the 567 Method and here are the final results:-

The idea behind the 567 Method is that it is meant to produce five bets per day, six days per week, giving seven points profit every week.

But sadly it didn’t turn out anything like that during our trial, finishing 43 points down in the end after three months.

The target of making seven points per week always seemed somewhat arbitrary (and hopeful) to us and that is what it proved to be. 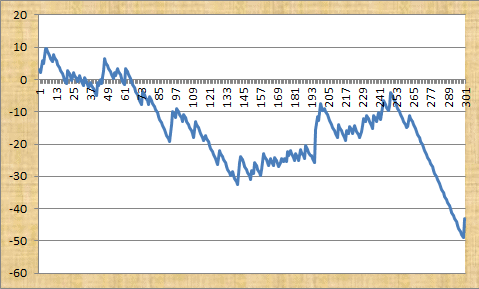 As you can see, things went downhill fairly early before a brief rally, but then there was a long losing run towards the end.

Some people in the comments below asked whether this is a scam. We don’t think it qualifies as a “scam” as such because it was never promising to make seven points profit per week, it was just a target – however arbitrary and unlikely that may have been.

But it does go down as a disappointing system and it’s a FAILED rating from us unfortunately.

Ease of use:  The selections are sent out in the morning by e-mail and there are five selections per day (apart from Sundays when there are none), so plenty of time to get the bets on.

Strike rate: The strike rate for the trial was over 21%, so there were some losing streaks, particularly towards the end.

Advised Betting Bank: No betting bank was advised, but we used a 100 point bank, which we lost nearly half of during the trial.

The concept of making 7 points profit per week sadly didn’t materalise for the 567 Method during our trial.

In fact we finished 43 points down, lost nearly half our bank and only had a small proportion of the weeks during our trial when the target was hit.

So unfortunately it’s a FAILED rating for the 567 Method and time to move on to the next system.

Not much change to report for the 567 Method, with just one point of profit added since our last update a few weeks ago.

That means we are now 15 points down for the trial overall at advised prices.

At Betfair SP we are 13 points down, so unusually we are doing slightly better at Betfair SP than at advised prices.

We have just over a week to go in our trial, so let’s hope for a good finish from the 567 Method to take us into profit overall.

There has been an improvement for the 567 Method since our last update at the end of October.

They have made 13 points profit in November, bringing them to 16 points down for the trial overall.

At Betfair SP things are slightly better, with them being 11 points down for the trial.

We have a month left in the trial, so will be interesting to see if they can continue the good recent form and finish in profit.

It’s been a tough run for the 567 Method since our last update a few weeks ago.

They have lost 32 points at advised prices since our last update, to sit at -29 points overall for the trial.

At Betfair SP, things are identical at 29 points down as well.

So far this is failing to live up to its billing of delivering 7 points profit per week. In fact we have only hit that target one week to date.

So have they managed it so far?

Well not quite – the first week we hit the profit target, the second we didn’t and the third we are mid-way through.

What happens is that if you hit the 7-point target for the week, then you stop there and there are no more bets for the week.

In the first week, the target was hit on Monday so there were no more bets for the rest of the week!

It is perhaps not surprising that the 7-point target has not been hit for the second week as it is somewhat arbitrary.

If your selection process works, why not carry it on for the rest of the week?

Everyone has their own approach to betting though I suppose.

We will see how things go with this and report back soon with another update.

We have been getting quite a few e-mails lately about something called the “567 Method.”

So always keen to check out any new offerings that come about and expose any possible scams, we thought we would investigate.

Upon clicking on the link you are taken to a glossy sales page with a video by a guy called “Ben Dawson.”

Now there are a number of things that worry us about this page.

Firstly there is the “only 7 days left to sign up.”

No successful system we have ever come across has this kind of sales pressure, certainly not at the outset.

Some will limit numbers of subscribers to protect prices after they have established a strong record of success over perhaps 1 or 2 years, but not to some arbitrary deadline.

Then there are the claims that he makes £700 per week, although when you watch the video he clarifies that he doesn’t actually make that amount every week.

Finally when we signed up, we immediately got requests to sign up to other services that Ben runs – never a good sign.

There is no information about how selections are arrived at – “Well that is a secret that I am not willing to let out of the bag.”

There are no published results either to back up the claim of profits being made.

So all in all we have to say we are skeptical about the 567 Method so far.

But we will put these doubts aside and run a three month trial to see whether Ben can back up his claims with some solid results.

We will be back soon with our first update.

In the meantime you can check out the 567 Method here.