It’s been a tough start to our re-review of horse racing tipster Back Lucrative, with a loss of 40 points made at advised prices since our trial recommenced at the end of January.

It has been a mixed picture however, with their Value Bets actually being 18 points up, while their Banker Bets are 58 points down.

You can view full results here. (please note there are two tabs on the spreadsheet for both sets of results).

At Betfair SP the story is a little worse, with 62 points lost for our re-review so far (with the Value Bets 1 point up and the Banker Bets 63 points down).

Obviously with racing suspended there are no selections for the time being. The latest from UK racing is that the early season classics – 1,000 Guineas, 2,000 Guineas and Derby – have been postponed until further notice. There are still plans for Royal Ascot to go ahead, with the Queen’s course making plans to hold races behind closed doors but they are dependent on the government allowing it to go ahead, so at the moment it’s up in the air as to whether that happens.

Anyway, whenever racing does get going again let’s hope things pick up for Back Lucrative.

Today we are going to take another look at a service we originally reviewed way back in 2015 and that is horse racing tipster Back Lucrative.

In our original three month review it made a solid 27 points profit, resulting in a neutral rating.

However, since 2015 it has gone on and produced some excellent results and demonstrated a superb level of consistency, adding another 1,000 points profit at a long-term ROI of over 12%.

We often say here that longevity is the ultimate measure of a tipster’s quality and Back Lucrative have certainly demonstrated longevity in spades, having been running since 2013 and amassing over 1,600 points profit in total over that seven-year period.

The yearly totals since our original review have been as follows:-

So as you can see pretty awesome stuff, as also demonstrated in the graph below of compounding stakes (but only compounding up to a £50 maximum): 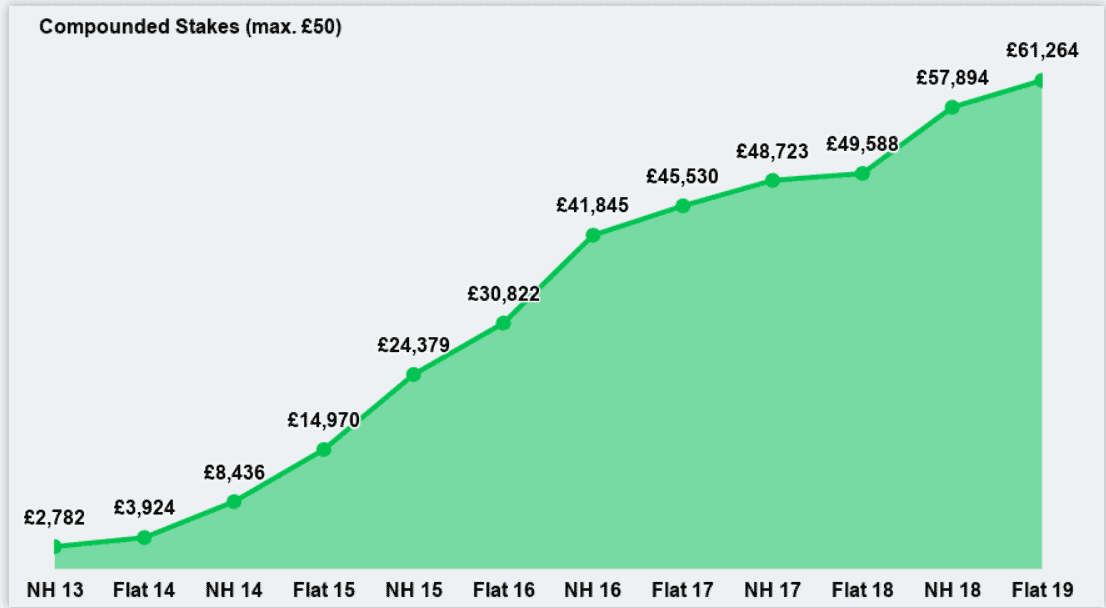 Now with such impressive long-term results, the service has proved very, very popular as you can probably imagine and they therefore often close the service to new members for long periods.

It has been closed to new members for some time now, but they are opening it up again for a brief window so we thought it would be a good time for us to have another look at the service given its stellar long-term record.

So we will be launching a formal re-review today and will update results here during our trial. Hopefully we will see the same kind of steady, consistent growth they have generated over the last seven years.

In the meantime if you want to check Back Lucrative out for yourself you can get a 7-day trial for just £1 here.

Here are the final results for our 3 month review of Back Lucrative:

So we come to the end of our review of Back Lucrative, a horse racing tipster that promises to make you “up to £1179.50 every month.”

The trial actually started off very promisingly with over 50 points profit in March, which made us think we might be on to something special here.

But sadly April only managed to break even and May saw a loss of 20 points.

So no disasters overall and any profit a service manages to make should be welcomed.

However, following the service does require quite a bit of work. There are a large number of tips and to back them all at advised prices takes quite a bit of time. You also have to log in to the site rather than having the tips e-mailed to you, which adds to the time required.

So overall perhaps this one is worth a try – after all it did make a profit – but having made only a 13% growth in the bank over three months means it doesn’t quite merit a place on our recommended list.

Ease of use: Quite time-consuming. First you have to log in to the site rather than having the tips e-mailed to you and then there are 5 tips per day on average, so backing them all at advised prices takes a while each day.

Availability of prices: Fairly good – there was an 18 point difference between advised prices and Betfair SP, so not a massive difference over the course of 480 bets and generally you should be able to get the advised prices or close to them.

Strike rate: The strike rate for the trial was 14% so there will be some long losing runs when using this service.

Advised Betting Bank: A 200 point betting bank is advised, which seems sensible and should be more than adequate to cover the drawdowns. According to historic results, they have only had four losing months in just under two years, with the worst month being around a 20 point loss.

Overall this one warrants a neutral rating. It made a profit which is good, but with only a 13% bank growth and 5.6% ROI over the course of 3 months and with the time involved in following the service, we feel it does not quite merit a place in our portfolio at the moment.

That is not to say it is not worth trying, but for us to recommend a system it has to be of the very highest quality and deliver good profits consistently that could provide a valuable second income.

This service didn’t quite manage that during our trial. However, if it could reproduce previous results then the rating could be upgraded, so we will keep an eye on this and update things accordingly.

You can get Back Lucrative here

Trade On Sports – Results Update
We use cookies to ensure that we give you the best experience on our website. By continuing we assume you accept the use of cookies. AcceptPrivacy Policy
Scroll to top