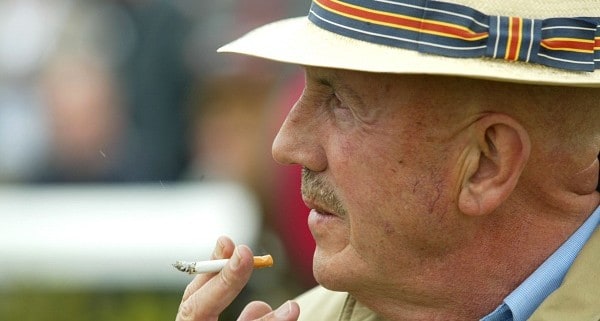 When you think of a dream list of professional gamblers, especially horse racing gamblers, you have to include one of the very best of them all: Barney Curley.

Bernard Joseph Curley, known more familiarly as Barney Curley, was born in County Fermanagh, Ireland, in 1939. After finishing his boarding school education, and working in a factory to pay off his family’s debts (his father was an unlucky dog race gambler), Barney trained as a priest.

He gave up studying for the priesthood after four years and went through several jobs trying to find his niche. He was a bookie, a band manager, a pub manager, and a smuggler (he smuggled razor blades and tyres into the Irish Republic). He finally settled on professional gambling when he was in his 30’s. Horse race gambling has never been the same since.

One of Curley’s first successes took place at a small race course in Cork. He hired 40 “putters-on”, at a cost of £4,000, to place small bets on a horse named Little Tim in which he owned a share. The scheme was a success and Curley won £40,000. Not bad for his first attempt using this scheme.

Curley was 36 years old when he made his first big coup betting on a horse named Yellow Sam. He entered Yellow Sam in a hurdle race for amateurs in one of Ireland’s oldest race courses at Bellewstown. It was a calculated risk because Curley knew the horse. He also knew Yellow Sam was capable of winning a race with a firm course, a good jockey, and not so good competition. This time, Curley set his putters-on to placing bets in 300 bookie shops.

One of the critical steps was an associate he hired to block the telephone box which was the only method of communication between the betting shops and the race course bookies. The scheme cost him £15,300 and he won more than £300,000. That was in 1975. Today, those winnings would be worth £2.5 million! Of his win, Curley said “…[Some say] ‘Oh, you can’t beat the bookies.’ Mostly that’s true. But I proved that you can”.

Today’s modern communication technology would prevent Curley’s scheme from achieving success. But Curley was not through designing tricks to beat the bookies. A young man named Martin Parsons determined that the betting shops do not watch out for multiple bets by a punter who bets on the winner of more than one race. With this information, Curley planned his next coup.

The Coup to End All Coups

By now, Curley based his activities in Newmarket where he had about 50 horses he was training. For his new scheme, Curley had to match four horses to four races in one day in which they had good odds of winning. He had to carry out his plans in complete secrecy because the bookies were on the look-out for any bets having to do with horses from his stable.

He worked with a man named Jack Lynch to hire 30 putters-on. This time, they used foldable bikes and mobile phones (untraceable of course) to place bets in as many betting shops as they could on that one day. It was a huge undertaking that required the putters-on to look nonchalant and disinterested in each betting shop so they would not arouse unwanted attention.

When Curley made the final selections, it was the horses Agapanthus at Brighton; Savaronola and Sommersturm, each running in successive races at Wolverhampton; and Jeu De Roseau at Towcester. Only Savaronola had ever won a race in Britain and he came up lame two days before the race. But Curley went ahead with his plan anyway.

Curley’s putters-on this time laid down bets totaling £100,000 on various multiples and in small amounts to avoid detection. They made treble bets on three of the four horses, in different combinations. They also placed bets known as Yankees, a multiple bet on four horses which require at least two horses to win in order for Curley to win any money at all.

Sommerstorm was the only horse to lose, coming in sixth place. Just the same, Curley’s scheme netted him £3.9 million. If Sommerstorm had won, the payout would have been £15 million.

Barney retired from training in 2013. He said at that time that no organized gambling coup would take place for the rest of the century. Good thing no one bet on his prediction because on January 22, 2014, Curley organized another coup that cost bookies £2 million.

It may not be possible for the average punter to match the feats of the legendary Barney Curley, but you can get one over on the bookies and take £500 per month off them risk-free using Profit Accumulator. Grab it whilst you can!

Hole in one Betting Coup