We have reached the end of our six month trial of Draw Profits and here are the final results:-

Draw Profits is a football betting service from the man behind the popular Banker Bets service, John Baker.

As we have said previously here at HBR, there is evidence to suggest value can be found in backing the draw in football, primarily because not many people bet on it so the price is often higher than it should be as this Guardian article details.

That has proved to be the case during for Draw Doubles at least, with a healthy profit of 18 points being made over the course of our six month trial. That came at an ROI of around 3% and a strike rate of 32%.

Results fluctuated around a bit as you can see below, but they were in profit for pretty much the whole trial and had a nice surge towards the end. 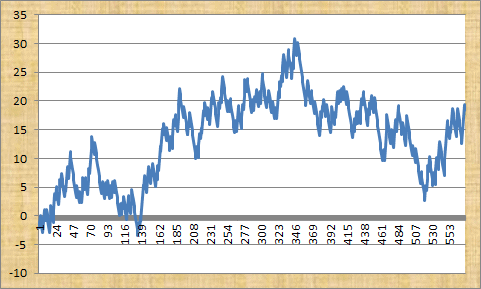 However, the raw numbers don’t tell the whole story as prices are quoted to the average odds, not the best available odds. So by shopping around using a site like Oddschecker and the exchanges, it is normally possible to beat the quoted odds. In our experience it was possible to beat the quoted odds by around 10-20% on average, which would make a big difference to your profits.

So really we think this service is worthy of considerable praise for underselling what it has achieved, a pretty rare feat in the world of tipping! Most of the time we complain that services are guilty of quoting prices that are difficult to obtain (or in some cases unobtainable), so it is a refreshing change indeed.

Overall then we are happy to award Draw Profits a PASSED rating after a successful six month trial and its rather understated achievements.

Ease of use:  There are an average of 3 bets per day, so a fairly straightforward service to follow.  It shouldn’t take too long to place the bets and the selections are sent out well before kick-off, usually early in the morning.

Availability of prices: As discussed above, you should be able to actually beat the published results by using best prices and exchanges, which is pretty awesome.

Strike rate: The strike rate for the trial was 32%, which is decent when backing draws and shows an edge over the market.

Advised Betting Bank: A 50 point bank is advised for following the singles, which we think is a sensible bank and was never in jeopardy during our trial.

We have been following John Baker’s football betting services since we started this website four years ago and have always been impressed with the results they generate.

Draw Profits is no exception, having made a very respectable 18 points profit during our extended six month trial.

However, that slightly undersells the service’s record as that is using average odds, whereas with a bit of effort you should be able to easily beat the quoted prices by 10-20% and achieve even better results.

It’s a simple service to follow and with affordable subscription rates we believe Draw Profits certainly merits a PASSED rating. We will continue to monitor it and see if the strong results achieved to date are maintained in the long run.

It’s been a bit of a tough time for Draw Profits since our last update just over a month ago, with a loss of 8 points in that time.

That means they are now 9 points up for our trial overall.

The results over the Christmas period were a little crazy, so lets hope in the New Year things settle down and they can get back on  track.

There has been a small decline for Draw Profits since our last update, with a loss of 4 points over the last month.

They are still well up for the trial overall though, with 17 points profit made in total.

As we have said before, these results are also just to average prices so you could easily do better by shopping around for the best odds.

Let’s hope they have got things back on track and started making profits again by the time of our next update.

Draw Profits has been on excellent form lately, racking up 14 points profit since our last update a month ago.

That means they are now 21 points up for our trial overall.

As we mentioned previously, it is actually possible to beat the advised prices because they quote at the generally available price so if you shop around using a site like oddschecker and use the exchanges then you can often get better odds than those given for the selections.

We are now just over half way through our six month trial and if things continue in this vein then this looks like it will join the list of our top footy tipsters.

Not much change for Draw Profits since our last update, with just 1 point of profit made over the last month.

That means they are now 7 points up for our trial overall.

There are quite a variety of leagues used with this service, including quite a lot from South America (where there tend to be a high number of draws) as well as across the European leagues.

It’s very simple to follow – just back the draw in the relevant match and you are done. Doesn’t get much more straightforward than that.

It’s been a good start to our trial of Draw Profits, the football betting service that bets solely on the draw in football matches.

So far it is 6 points up at advised prices after just over a month of following the tips.

Interestingly when sending the tips they provide the average odds available for the draw rather than the best odds, which is quite unusual for a tipping service. Normally tipsters want their results to be the best they could be so quote the best odds available at the time of the tips.

However, by quoting the average odds that means you could actually beat the official results and so we have also been recording the best odds available. The best odds have produced an extra 2 points of profit, meaning they are 8 points up for our trial so far to best odds.

That doesn’t even include Betfair and the other exchanges, so you may have been able to do even better by using those.

Anyway, whichever odds you are using it has been a good start to our trial and now with the footy season getting going in earnest there should be plenty of action to get involved in.

Well the World Cup has only recently ended but the start of the new football season is just a couple of weeks away.

It does seem a bit strange to be thinking of the football season when most of us are basking in roasting-hot temperatures, but before we know it we will be enjoying the cut and thrust of the Premier League, Champions League and top European leagues once again.

So it’s a good time to be kicking off a new football trial in the form of a system called Draw Profits, although in some ways this isn’t actually a new trial at all.

No, it is actually a re-working of a previous system we reviewed, Draw Doubles.

The problem with Draw Doubles was that it involved backing selections in both singles and doubles.

And whilst the singles did pretty well, the doubles had a bit of a ‘mare and dragged down the results. So they have decided to reform the service and just concentrate on the singles.

This seems like a very sensible approach to us and we had said at the outset of our trial of Draw Doubles that we were worried the results for the doubles could be very volatile, have long losing streaks and not truly represent the quality of the individual selections.

So it proved and we are glad to see that the service will now concentrate on just single bets.

The service therefore is very simple: just back the selected match to finish in a draw and that is it – no trading or hedging needed.

The results for the single bets since the service started are pretty strong, with 34 points profit made at a strike rate of 31% and with 69% bank growth.

As we said in the our original review of Draw Doubles, there is evidence to suggest there is value to be found in backing the draw, primarily because not many people bet on it so the price can be higher than it should be.

Let’s hope that proves to be the case here and we end up with some nice profits.

Anyway, we will start our trial today and incorporate the previous results of the single bets that we have already proofed over the last few months.

We will update results here soon, but in the meantime you can check out Draw Profits here.