We have reached the end of our trial of  Head 2 Head Sports and here are the final results:

Head 2 Head Sports is a service that tips in an eclectic mix of darts, snooker and tennis, with the majority of bets coming in the latter.

There is an old adage that bookies love people who bet on lots of different sports and we imagine there is some substance behind that.

So we are not surprised in all honesty that this trial has not ended in a success – after all, they are taking on one of the toughest challenges in gambling.

Virtually all of the professional gamblers we have heard of specialise in one thing – whether it be horse racing, football, poker or some other discipline.

We would even say that most professionals tend to focus on a niche within a particular sport, like sprints in horse racing or corners markets in football, for example.

So finishing 17 points down is certainly no disgrace for Head 2 Head sports, but with 34% of the bank lost over the trial, it ultimately results in a failed rating unfortunately. 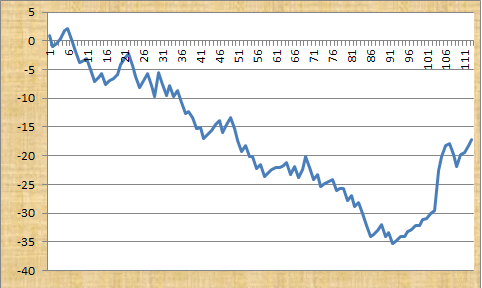 As you can see, it was steady losses for most of the trial, with a bit of a late rally to improve the figures somewhat by the end.

Ease of use: With just over one bet per day, this is quite a simple service to follow. With bets across sports like darts and snooker, it is advisable to have a few bookie accounts to maximise the chances of getting the best odds.

Strike rate: The strike rate for the trial was 59%, which on the face of it is good but with most bets being at short odds, was not high enough to make a profit.

Advised Betting Bank: With a 50 point bank being advised for the service, it should be comfortable to cover a service like this with a high strike rate and even with a tough run during the trial, the bank was sufficient enough not to be threatened.

Tipping across multiple sports is a notoriously hard thing to do and we know very few people out there who do it successfully.

Head 2 Head Sports tip across an interesting mix of sports, including tennis, darts and snooker.

They had a tough trial, which resulted in a loss of 17 points – equating to a 34% reduction of the bank.

On that basis, unfortunately it is a failed rating for Head 2 Head Sports. As ever, we will keep an eye on things and see if they can turn matters around.

It has continued to be a struggle for Head 2 Head Sports since our last update, with a further 11 points dropped over the last month.

That means they are now 34 points down for the trial as a whole.

This is another one of those trials that seems to have landed some kind of curse. Where as coming into the trial they had racked up impressive profits, since our trial started in September they are now on 5 losing months in a row.

Hopefully things will turn around for them soon.

There isn’t a great deal to report since our last update on Head 2 Head Sports a month ago.

They are exactly where they were a month ago, on -23 points for the trial.

It has been quiet for them in terms of bets as well, with only 12 bets in the last month. Well with Christmas and everything that’s understandable.

Although the trial is past the three month mark now, we haven’t 100 bets yet so will continue for a little while longer until we have hit that point. Could be a while!

The tough run has continued for Head 2 Head Sports, who have dropped a further 8 points since our last update just over a month ago.

They are now 23 points down for our trial, which is a little disappointing so far.

This is a very low volume service, with just 60 bets so far after nearly three months. A selective approach can often prove effective, but so far it has been a tricky time for Head 2 Head Sports. Hopefully things will pick up for them soon.

It has been a tough start to our trial of Head 2 Head Sports, who are currently 15 points down after just over a month of tipping.

I think they call this sod’s law – October was the worst month they have had since the service started and by a long way. Before that their worst month had been a loss of just two points.

Most of the bets are in tennis, followed by darts and then snooker. I suppose with the tennis season coming to an end you might be getting more random results (apart from Djokovic still winning everything of course).

Anyway, whatever the reason for the dip in form, let’s hope things pick up for them for the remainder of the trial.

We are having a little spate of multi-sports services coming under review at the moment, with Betting Bias, The Sports Guru and now Head 2 Head Sports from the Tipster Street stables entering a trial.

Head 2 Head Sports concentrates on a rather eclectic mix  of tennis, snooker and darts. We are not quite sure what connects these three sports, but they do seem to know their stuff on all of them.

The results published on the website are very good, with 84 points profit made since the service started in January of this year.

That comes at a return on investment of 18%, which when betting on sports at generally low odds is very commendable.

The selections are mainly odds-on and with a very high strike-rate of 71%, the losing runs should be minimal with this one.

We will be interested to see how this tipster gets on during our trial as it seems like a very promising discovery.

We will be back soon with updates on how the trial is going.

In the meantime you can check out Head 2 Head Sports here.

What is risk-free Betting?

What is a Super Yankee Bet?
Scroll to top