We have reached the end of our four month trial of the Man In The Know and here are the final results:-

Man In The Know – Full Review

The Man In The Know is a horse racing tipster from the Inbetsment tipster platform. The tipster has been gambling professionally since 2001 – solely on horse racing since 2013 and poker prior to 2013.

He has been tipping since 2014 and his record since then according to the Inbetsment website has been outstanding, with a profit of over 2,400 points made at a return on investment of over 22%.

With such a strong record behind him we were eager to check out the service and see if those kind of results could be repeated during a live trial.

Quite often on this website we end up saying that results in our trial failed to live up to the pre-trial billing.

Well gladly this isn’t one of those occasions and we are delighted to say that the Man In The Know has lived up not only to his pre-trial results but also to his name, proving that he very clearly is in the know.

Yes with an excellent profit of 174 points to advised prices, that represented nearly a trebling of the recommended starting bank and was achieved with a superb ROI of 38%.

Those are some of the strongest results we have seen in a trial for some time and put him up there in the pantheon of greats along with the likes of Quentin Franks and the Bet Alchemist.

Here are the results for the trial in graph format:- 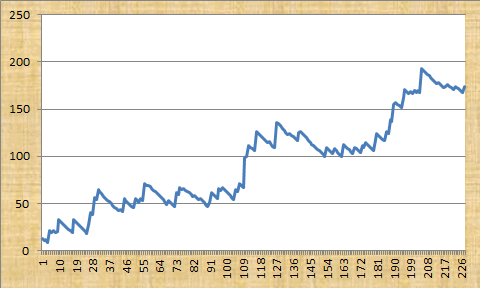 So as you can see, very steady profit throughout the trial.

However, as you might expect with such fantastic long-term results, the Man In The Know has built up quite a following for himself and the advised prices do come under a lot of pressure immediately after tips are sent out.

You can receive tips either by e-mail or through the Inbetsment app, so getting the tips quickly and acting fast is imperative.

Looking at the Betfair SP results, they were still very good with a profit of 64 points made but that is obviously well below the 174 points made at advised prices.

So please bear this in mind if you are thinking of signing up. Either way though this was an excellent trial and it’s a definite PASSED rating from us.

Ease of use: Good – tips are sent out the evening before racing, usually around 7-9pm (UK time) and with an average of 2 bets per day there isn’t too much work involved in following the service.

Availability of prices: As discussed above, the advised odds come under significant pressure as soon as tips are sent out, so this is something you need to be prepared for if signing up.

Strike rate: The strike rate for the trial was 26% (including placed horses), which is solid enough.

Advised Betting Bank: A 100-point bank is advised for following the service, but even with the excellent results we think a 150-200 point bank would be more appropriate having looked at some of the past drawdowns.

The Man In The Know certainly lived up his name during our trial and showed he must really be in the know when it comes to horse racing because he amassed a superb 174 points profit at advised prices.

With a return on investment of 38% and more than doubling the advised betting bank there is no doubt this receives a PASSED rating from us.

As with other services as good as this however, they often become victims of their own success and the odds do get smashed in as soon as tips are sent out. The results at Betfair were still good with 64 points profits made, but that is obviously well below the total at advised prices and needs to be taken into account if you are considering following the service.

Man In The Know – Results Update

Horse racing tipster the Man In The Know continues to deliver the goods, with another 66 points profit made at advised prices since our last update.

That means he is now 117 points up for our trial overall at advised prices.

However, prices get absolutely smashed in after tips are sent out – it really is a case of getting those bookie accounts open and funded before tips are sent out and placing the bets pretty much instantly after you receive the tips.

That is reflected in the Betfair SP results, which made just 15 points profit since our last update and have made 29 points profit for our trial overall. So that’s nearly 100 points difference between the results at advised prices and BSP.

So this is looking like one of those cases of becoming a victim of their own success in some respects as they have obviously built a large and loyal following meaning that a lot of pressure is put on the prices.

You can’t blame The Man himself as he’s just doing his job and producing high quality tips but this does happen sometimes with the best tipsters unfortunately.

Man In The Know – Results Update

It’s been a positive start to our trial of horse racing tipster Man In The Know, who has made 51 points profit so far at advised prices.

At Betfair SP it has also been profitable, although not quite as strong as at advised prices, with 14 points profit made for our trial so far. That is reflective of the fact that prices do tend to get hit quite hard after tips are sent out, meaning a bit of a scramble to get the bets on.

It will be worth keeping an eye on the difference between advised prices and BSP results and whether there is a big gap by the end of our trial.

So far so good though for the Man In The Know.

Man In The Know – New Review

Today we are starting a new trial of a horse racing tipster called “Man In The Know” from the Inbetsment tipster platform.

The Man himself has been gambling professionally since 2001 – solely on horseracing since 2013 (poker prior to 2013).

He has been tipping horses since early in 2014 and started off by giving his tips for free, built a following and then moved to a subscription service in April 2015. He was previously on the Racingproofing service.

He focuses on UK horse racing and is strong across all codes of racing throughout the year.

The main thing that attracted us to checking out this service was the super-impressive set of results, with an immense profit of over 2,200 points since starting tipping in 2014.

His return on investment over that period has been a formidable 21% and a fair strike rate of 27%. His consistency is remarkable, with a profit made in 14 of the last 15 months.

So with results like those we felt we just had to check the service out and see if it could deliver us some decent profits.

We started receiving tips a week ago so will record results from then. Please check back here for regular updates on how the trial is going.

In the meantime you can check out Man In The Know here.

Noel Fehily – A Tale of Triumph Over Adversity