Journalist, news editor, press officer, author, radio presenter, and TV presenter, and Everton Supporter; Mike Parry has enjoyed a colourful life, and hopefully will continue to do so for many years into the future. Here is a brief look at Mike Parry’s story.

Born in December 1954, he attended The Kings School, an independent coeducational school in Chester. He later went on to complete his education at Trent Polytechnic in Nottingham.

After graduating from Trent he began his career in journalism, working in Fleet Street. He became a reporter for the Sun newspaper. He moved on to becoming news editor of the Press Association followed by a spell as press officer for the F.A. before joining Talk Radio (rebranded as talkSPORT in 2000) as a sports presenter in 1999.

Along with Alan Brazil he presented Sports Breakfast, but partially as a result of his lifestyle of heavy drinking and junk food, he was struck down by ill health in 2004 and had to quit his job.

Throughout his career Mike Perry developed a reputation for making gaffs.  Many of them have been documented, but here are just a few of our favourites.

“Man City have put a spanner in the waves”

“A blizzard was blazing all around him”

“There’s a  certain Englishness about the English game”

“The ref is in a no-win, no-lose situation”

“Nothing can expand without it growing”

“Anfield will be a fortress cauldron today” 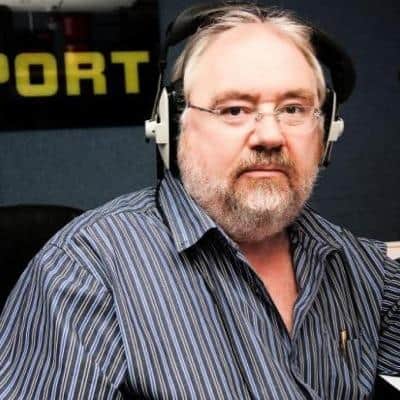 In 2005 he was diagnosed with advanced dilated cardiomyopathy, which means that his heart muscle was diseased and could no longer pump blood properly. It seemed that his only hope of long term survival was a heart implant.  Kept alive on drugs, it was touch and go whether a new heart would become available for him in time.

He was so weak he couldn’t leave his home. He had had to quit his job and the career that he loved was in tatters. Not surprisingly he grew progressively frustrated and depressed. His despair continued for two months before he became determined not to just give up.

During his illness Parry had received many letters wishing him well from the many fans he had gained on Talk Radio. He made a point of replying to them, but unable to post them himself he gave them to his sister to post. The post box was just 70 yards away from his front door, but it might as well have been 70 miles; he was unable to make it that far.

That is until he decided to make getting to the post box his goal. At first he could take just a few steps before giving up, but after two weeks of intensive effort he succeeded in getting there. But that was just the start. Every day he pushed himself a little more and by the end of the next four months he was able to walk 400 yards a day.

In fact his recovery was so profound that it was decided he no longer needed a new heart and was taken off the heart transplant list. Still he kept on pushing himself and, three years later, he was able to complete a half marathon, the Great North Run, in which he raised £9,000 for the Harefield Hospital.

Now 4 stone lighter, drinking only moderately and eating a healthy diet, he returned to his job at talkSPORT part-time in 2009, presenting the weekday 10.00 to 13.00 with Andy Townsend. The following year Andy Townsend was replaced with Mike Graham, but sadly Parry and Graham didn’t get on well. At that time there was a personality clash that eventually led to the show breaking up in 2011. One result of this was that Parry left talkSPORT.

Parry continued as a radio presenter, occasionally appearing on Radio 5 Live and from July 2013 retuned to talkSPORT as a paper reviewer and as a co-presenter with Mike Graham on the rebranded Two Mikes show. 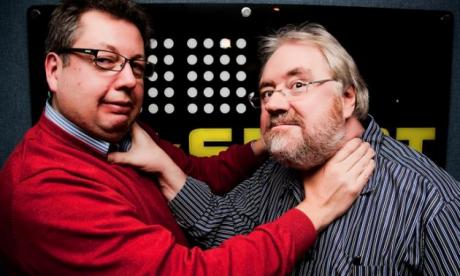 The Two Mikes show is built around the basic personality conflict between Mike Parry and Mike Graham. Now styled as “Porky” Parry and “Old MG” Graham, both hardnosed one time Fleet Street journalists and radio presenters, they create a show that features “relentless banter” in which they continually deride each other as they report on their personal adventures. As well as being broadcast nightly on talkSPORT, they have created a live show which was staged at the Edinburgh Festival and has been on tour nationally (they call it their World Tour). They have also launched a Two Mikes CD and have been named as alternative entries to Man of the Year by the Daily Telegraph. 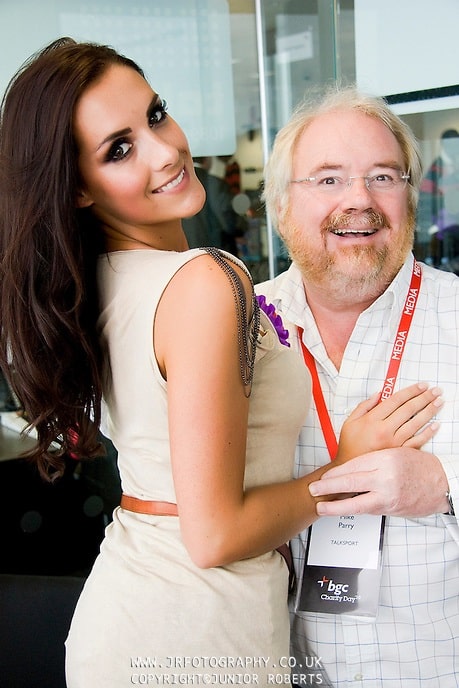 Mike Parry is unique. One of the old school hardnosed hard living journalists who forged a career as a radio presenter and stand-up showman, he has a strong fan base who respect him for his deep knowledge of football as well as his ever flowing humour.  Often described as the Porkmeister, while many say he’s a genius, others mark him down as an idiot, but he is certainly not that. Sure, he has said some strange things; he once called for seeding in the FA Cup to ensure that it was the top clubs that made it to the latter stages, famously remarking that “No one wants to see Millwall in the final”. That went down like a lead balloon in some quarters. Still, love him or hate him he is what he is and the world’s a better place for it.