One of the first services we reviewed here at Honest Betting Reviews was Quentin Franks Racing and it’s now been over seven years since we started following his tips – how time flies!

When we last updated our review, Quentin had made over 830 points profit to that point, a quite exceptional effort and well worthy of our award of five stars.

How has he done since then however? Has Quentin been able to continue that kind of consistent excellence?

Well the good news is yes, he certainly has!

Since we last updated our review back in May 2017, Quentin has made another 870 points profit.

That means since we started proofing his tips back in March 2015, Mr Franks has banked a colossal 1700 points profit.

That puts him in the very elite of tipsters who have broken the 1,000 point barrier and well on his way to the 2,000 point mark, putting him amongst the pantheon of all-time great professional gamblers.

Even at just £10 stakes the average monthly profit stands at over £190 profit and the return on investment has been stellar at 16% with a solid strike rate of 23%.

So there is no doubt Mr Franks is one of the very best tipsters in the game and fully deserving of his massive following.

Overall then we have no hesitation in continuing to award Quentin Franks Racing a PASSED rating and a five star recommendation.

You can check out Quentin Franks Racing for yourself here.

We have now been following the tips of Quentin Franks Racing for over two years, so thought it would be a good time for an update.

At the time of our last update just over a year ago, we awarded Quentin a five star rating, with 284 points profit having been made in that year.

Well since then, Quentin has put on the afterburners and exceeded even those exceptional levels, notching up well over 550 points profit.

That means since we started proofing the tips in March 2015, the service has made over 800 points profit.

You probably don’t need us to tell you that is quite incredible stuff!

Here is a look at the results in graph format since we started proofing the tips: 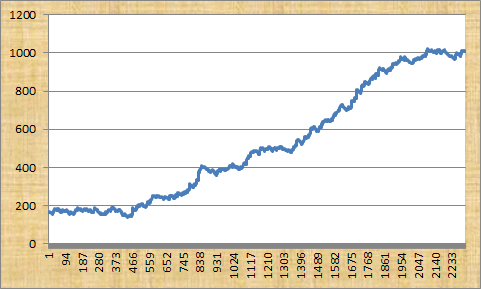 As you can see, just an amazingly smooth and steady upward curve – exactly what every investor is looking for!

Back when we updated this last year, we upgraded Quentin Franks to be our number one recommended tipster.

We have absolutely no reason to change that – in fact our view of the service has only been strengthened in that time.

Out of the last 21 months, an astonishing 19 have been profitable.

That is a record of consistency most tipsters can only dream of.

A truly brilliant service and one that has made us a rather substantial amount of money from following his tips – thank you Quentin!

We are running out of superlatives to describe Quentin Franks Racing so instead we will simply say this: if you are not already a member, we strongly suggest you sign up today.

It’s a decision we doubt you will regret.

As it is now a year since we started proofing Quentin Franks Racing tips, we thought it would be a good time to provide an update on how things have been going.

Our original three month trial concluded in June 2015 with a neutral rating and 6 points of profit accumulated.

However, things have really taken off since then for Quentin.

Here are the monthly totals since the trial concluded in June last year:

So a highly impressive 284 points profit since our trial ended nine months ago.

And eight winning months out of nine – not bad either!

Here is the profit graph for the last nine months: 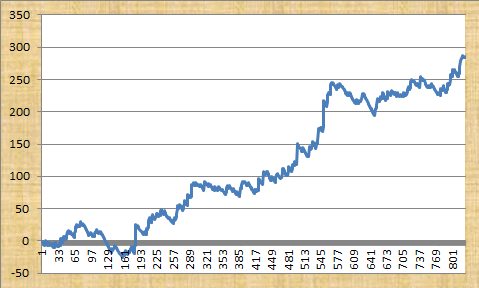 As you can see, a mightily impressive profit graph with solid, steady growth – just what we want to see.

Overall these results have been achieved with a strike rate of 25% and a return on investment of 17%, which is very respectable indeed.

With superb results since our trial ended nine months ago, we have no hesitation in upgrading Quentin Franks Racing to a passed rating.

This is definitely one to subscribe to whilst you still can – there are very few tipsters out there with as consistent a record as Quentin Franks and this is the sort of service that can make you steady profits month after month.

You can check out Quentin’s tips for yourself here.

We have completed our three month trial of Quentin Franks Racing and here are the results:

The third in our series of Betting Gods trials is complete. So how did Quentin Franks Racing compare to the likes of Master Racing Tipster and Big Race Bookie Busters?

Well unfortunately it hasn’t done quite so well, ending up with figures of 6 points profit at advised prices and -41 points at Betfair SP.

We had high hopes for Quentin as coming into this trial he had amassed over 180 points of profit and racked up nine winning months out of nine.

But sadly as we see often with tipsters, it is difficult to keep up with the top form indefinitely and at some point there will be a dip.

That said, making 6 points profit at advised prices is no disaster so we are not ready to write off Mr Franks just yet.

It’s been quite topsy-turvy! But actually the fluctuations weren’t that large, varying between 17 points up or down over the course of the trial.

Ease of use: Fairly good – there are on average 3 bets per day which are normally sent around 9am (British time). It shouldn’t take too long to place the bets.

Availability of prices: OK – prices do tend to go fairly quickly and certainly by race time you are looking at considerably lower prices. This is evidence by the big 50 point difference between the advised results and Betfair SP results.

So you want to get your bets on quickly to achieve the best prices.

Strike rate: The strike rate was 23% for the trial, which is close to the long-term average of 25%.

Advised Betting Bank: The advised betting bank is 100 points, which seems reasonable. Staking is 1 or 2 points with the very occasional 3 point bet.

The bar has been set very high recently with the achievements of Master Racing Tipster and Big Race Bookie Busters, so perhaps we shouldn’t judge every service by their high standards.

We had high expectations for Quentin Franks Racing coming into the trial and whilst he hasn’t quite delivered what we were hoping, he has not had a disaster either.

Given the impressive long-term record, we will place this in the neutral category for now and see if Quentin can recapture his previous form over the coming months.

You can check out Quentin Franks Racing here