It has been six months now that we have been following Big Race Bookie Busters so we thought time for an update.

Sadly the news it not good. In fact, it’s very bad.

You may recall that Big Race Bookie Busters (or BRBB for short) racked up a hugely impressive 195 points of profit during our trial which ended in June (see below).

Well unfortunately since then the service has done its best impression of Charlie Sheen in Terminal Velocity and taken a spectacular nosedive.

Here are the results since our trial ended on 26th June 2015 in graph format: 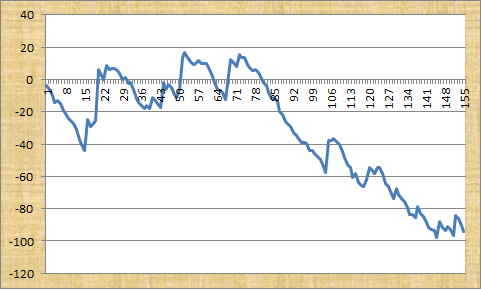 That represents a 94 point loss and with a 100 point bank advised, it is nothing short of a disaster. If you had joined a bit later in July or August at certain points, you could have lost the entire bank.

Now that is tough to take and we were backing their tips with our own money, so felt this just as keenly as anyone else.

Of course the overall picture for BRBB is that they are still over 300 points up since the service started under a year ago, which is impressive.

But the loss of the full 100 point bank is something no service should experience. It goes without saying that the advised bank was way too small and we think the advised bank should be at least 200 points, if not 250 points given the recent drawdown.

That would put the overall results into a bit of a clearer perspective, with the service having more than doubled that 250 point bank in under a year and having experienced a 40% drawdown during that period.

So the question then becomes:

Does this service still deserve its approved rating and 5 stars?

Well clearly not the 5-star rating, that will have to be revised downwards.

Overall, it is always best to take a long-term view of betting and not to judge any service on a short period like a couple of months.

Since the start of our review, they are still over 100 points up, which is good.

However, we appreciate that anyone who has joined this service since our trial finished at the end of June will have lost their entire bank and no doubt given up by now – perhaps rightly.

No service should ever come close to losing its entire bank – normally that would be an automatic fail for us.

So with these two conflicting points of view, we think a downgrade to a neutral rating and 3 stars is the only fair conclusion.

We believe that for the service to regain its credibility, it should revise the advised bank to 250 points and this should be sent out to all new and existing members.

It may seem a little harsh to give a service that has produced 100 points profit a neutral rating, but we believe that it is crucial that the correct bank sizes are advised and this will serve as a warning to this and all other services to make sure this aspect is carefully looked at.

The wheels have come off in spectacular fashion for BRBB and it has been a painful experience for all those following their tips over the last three months. The advised bank should have been much higher than 100 points – we believe 250 points would be reasonable.

So it is a downgrade to a neutral rating and 3 stars, with a note that hopefully a more realistic bank will be advised for future subscribers to this service.

We have come to the end of our three month trial of Big Race Bookie Busters and here are the final results:

It has been an excellent three month trial for Big Race Bookie Busters, amassing a fantastic 195 points profit and nearly trebling the bank over the course of the trial.

Even at Betfair SP they managed 134 points profit and 134% growth of the bank, which is pretty exceptional.

We thought when Banker Bets nearly doubled the bank over the course of a trial it might never be beaten.

But now we have both Master Racing Tipster and Big Race Bookie Busters smashing their records and setting a new benchmark for tipping.

It’s a very simple service to follow – you normally have just one or two bets per day and as the name suggests, these tend to be in the big races. Tips are provided for both flat and national hunt racing.

There are detailed write-ups for the selections and you can see the thinking behind the tips. It is a traditional form-based approach, focusing on horses with a range of factors in their favour for the race.

During our trial they managed a superb 50% return on investment (ROI) and their long-term returns stand at just shy of 60%.

That is phenomenal going and we have rarely seen such impressive figures from a tipster. It will be tough to maintain these ROI levels in the long run but as long as they keep up the consistent profits then that is the main thing.

Here is a graph of their performance over the trial: 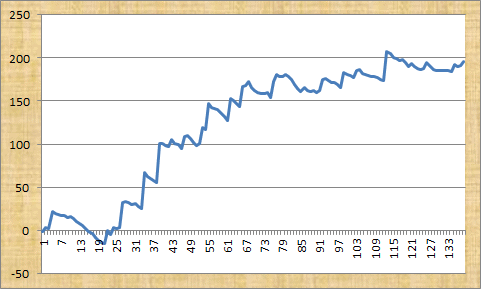 As you can see, they set off like a steam train and then continued to make steady profits throughout the trial.

Ease of use: Good – there are on average 1.5 bets per day so minimal work on the part of the subscriber.

Availability of prices: OK – the tips do tend to get backed in, as evidenced by the 31% difference between results at advised prices and those at Betfair SP.

However, if you act reasonably quickly it is not impossible to get the advised prices or close to them. And even if you do just back at Betfair SP, the service still made 134 points profit over our trial, which is very good going.

Strike rate: The strike rate for the trial was good at 35% – that’s if you include placed horses – or 15% if you talk only about winners.

Advised Betting Bank: They advise a 100 point bank, which seems just about OK. The staking ranges between 1 and 6 points for each selection, with the average being just under 3, so is quite high. If you are of the more cautious mindset you may want a 150 point bank just to be on the safe side.

It’s been a fantastic trial for Big Race Bookie Busters and there’s very little not to like about this service – simple to follow and consistent profits at a very reasonable cost.

To have nearly trebled the bank in three months is an outstanding achievement and they deserve great credit for that.

This one definitely goes on our approved list and we have no hesitation in recommending it. Get on board if you want to bust the bookies too!

You can get Big Race Bookie Busters here

What is a Trixie bet?